In this tutorial, we’ll review Stratified Sampling, a technique used in Machine Learning to generate a test set. Then we’ll illustrate how to implement it, and provide an example of an application.

Creating a test set is a crucial step when evaluating a machine learning model. The simplest way to create a test set is to pick some instances randomly from a large dataset, typically 20% of the original dataset. In statistics, this method is called Simple Random Sampling, since a subset of instances (the sample) is chosen randomly from a larger set (the population). Each subset of

Random sampling is generally fine if the original dataset is large enough; if not, a bias is introduced due to the sampling error. Stratified Sampling is a sampling method that reduces the sampling error in cases where the population can be partitioned into subgroups. We perform Stratified Sampling by dividing the population into homogeneous subgroups, called strata, and then applying Simple Random Sampling within each subgroup.

As a result, the test set is representative of the population, since the percentage of each stratum is preserved. The strata should be disjointed; therefore, every element within the population must belong to one and only one stratum.

Now let’s consider a real example. The Italian population is 48.7

females, so a survey in Italy should be done by picking a sample of individuals while maintaining this ratio. If the survey sample contains 1000 individuals, then the Stratified Sampling picks exactly 487 males and 513 females. If Simple Random Sampling is performed, then the right percentage of males and females isn’t preserved, and the survey results will be significantly biased.

We can easily implement Stratified Sampling by following these steps:

Stratified Sampling ensures each group within the population receives the proper representation within the sample. When the population can be partitioned into homogeneous subgroups, this technique gives a more accurate estimate of model parameters than random sampling.

However, simple random sampling is more advantageous when the population can’t be divided into subgroups, since there are too many differences within the population.

Now let’s consider an example of a binary classifier that predicts if a digit is nine or not. We’ll perform the K-Fold Cross Validation with the Stratified Sampling in order to assess the performance of the classifier. Then we’ll exploit the StratifiedKFold class provided in the Python package Scikit-Learn.

Then we’ll create a target vector for this binary classification task:

Note that this dataset is imbalanced since the negative instances (not-9) are more frequent than the positive ones (9).

At each iteration, the code splits the dataset using the stratified sampling, trains the classifier on the training folds, makes inference on the test fold, and evaluates the overall accuracy. Finally, it prints out the percentage of instances belonging to the positive class in the original dataset, the training set, and the test set at each iteration.

The percentage of the positive class is preserved for each split as expected: 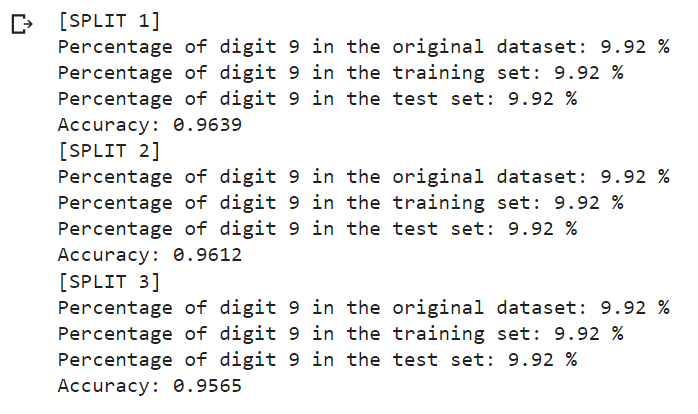 Now let’s consider the K-Fold Cross Validation without Stratified Sampling. We must replace StratifiedKFold with the KFold class in the above code:

Now we’ll get the following output: 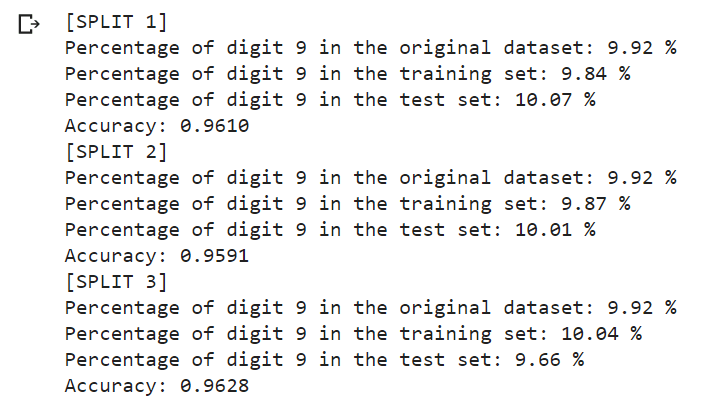 We can see that the proportion of the percentage of the positive class varies hugely among the original dataset, training set, and test set within each split because we haven’t used the Stratified Sampling.

In this article, we examined Stratified Sampling, a sampling technique used in Machine Learning to generate test sets. We also discussed the advantages and limitations of the technique. Finally, we learned how to apply the K-Fold Cross Validation with Stratified Sampling to evaluate a digit classifier using a Python implementation.