In machine learning, classification refers to predicting the label of an observation. In this tutorial, we’ll discuss how to measure the success of a classifier for both binary and multiclass classification problems. We’ll cover some of the most widely used classification measures; namely, accuracy, precision, recall, F-1 Score, ROC curve, and AUC.

Given two classes, we can talk in terms of positive and negative samples. In this case, we say a given e-mail is spam (positive) or not spam (negative). 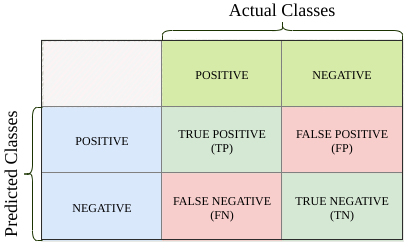 There are four categories associated with the actual and predicted class of an observation:

The diagonal of the confusion matrix presents the correct predictions. Obviously, we want the majority of our predictions to reside here.

For example, if our classifier is predicting if there is a fire in the house, a Type I error is a false alarm.

On the other hand, a Type II error means that the house is burning down and the fire department isn’t aware.

Suppose we have a simple binary classification case as shown in the figure below. The actual positive and negative samples are distributed on rectangular surfaces.

However, our classifier marks the samples inside the circle as positive and the rest as negative.

How did our classifier do? 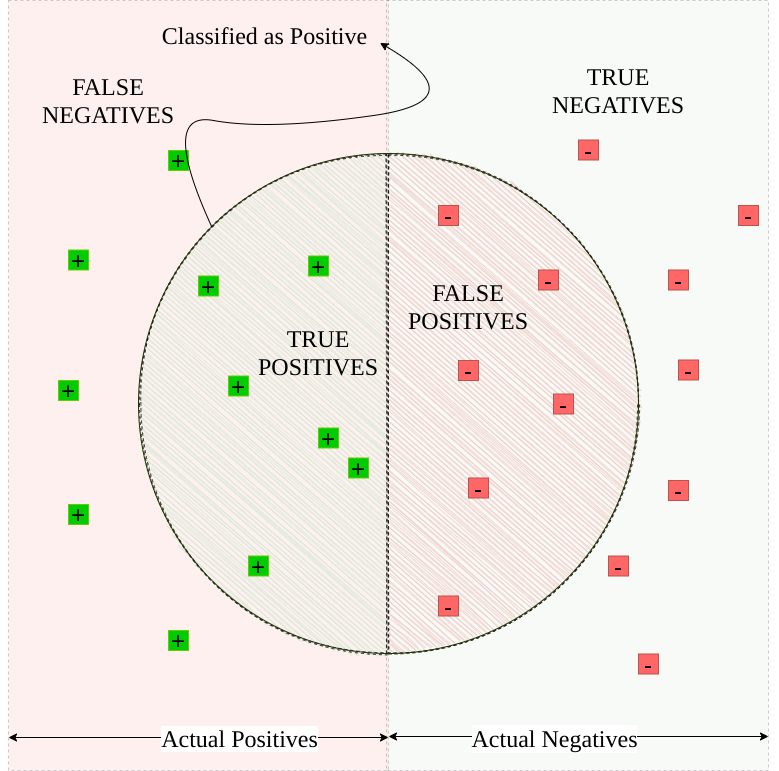 Many metrics are proposed and being used to evaluate the performance of a classifier. Depending on the problem and goal, we must select the relevant metric to observe and report.

In this section, we’ll try to understand what do some popular classification measures represent and which one to use for different problems.

The most simple and straightforward classification metric is accuracy. Accuracy measures the fraction of correctly classified observations. The formula is:

Thinking in terms of the confusion matrix, we sometimes say “the diagonal over all samples”. Simply put, it measures the absence of error rate. An accuracy of 90% means that out of 100 observations, 90 samples are classified correctly.

Although 90% accuracy sounds very promising at first, using the accuracy measure in imbalanced datasets might be misleading.

Again recall the spam e-mail example. Consider out of every 100 e-mails received, 90 of them are spam. In this case, labeling each e-mail as spam would lead to 90% accuracy with an empty inbox. Think about all the important e-mails we might be missing.

Similarly, in the case of fraud detection, only a tiny fraction of transactions are fraudulent. If our classifier were to mark every single case as not fraudulent, we’d still have close to 100% accuracy.

An alternative measure to accuracy is precision. Precision is the fraction of instances marked as positive that are actually positive. In other words, precision measures “how useful are the results of our classifier”. The mathematical notation is:

Otherwise speaking, a precision of 90% would mean when our classifier marks an e-mail as spam, it is indeed spam 90 out of 100 times.

Another way to look at the TPs is by using recall. Recall is the fraction of true positive instances that are marked to be positive. It measures “how complete the results are” — that is, which percentage of true positives are predicted as positive. The representation is:

That is to say, a recall of 90% would mean that the classifier correctly labels 90% of all the spam e-mails, hence 10% are marked as not spam.

Classical classifiers have a threshold value, for which they mark the lower results as negative and higher results as positive. Changing the defined threshold value for a binary classifier leads to changes in the predicted labels. So, reducing the rate of one error type leads to an increase in the other one. As a result, there is a trade-off between precision and recall.

All in all, both precision and recall measure the absence of errors in special terms. Perfect precision is equivalent to no FPs (no Type I errors), while on the other hand, perfect recall means there are no FNs (no Type II errors). In some cases, we need to select the relevant error type to consider, depending on the problem goal.

Usually, having a balanced recall and precision is more important than having one type of error really low. That’s why generally we take both precision and recall into consideration. Several classification measures are developed to identify this problem.

For example, the F-1 score is the harmonic mean of precision and recall. It gives equal importance to Type I and Type II errors. The calculation is:

When the dataset labels are evenly distributed, accuracy gives meaningful results. But if the dataset is imbalanced, like the spam e-mail example, we should prefer the F-1 score.

Another point to keep in mind is; accuracy gives more importance to TPs and TNs. On the other hand, the F-1 score considers FN and FPs.

A well-known method to visualize the classification performance is a ROC curve (receiver operating characteristic curve). The plot shows the classifier’s success for different threshold values.

In order to plot the ROC curve, we need to calculate the True Positive Rate (

) and the False Positive Rate ( 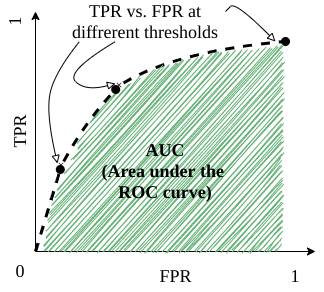 To better understand what this graph stands for, first imagine setting the classifier threshold to

Conversely, setting the threshold value to

causes every observation to be marked as negative. Then, the algorithm will label more observations as negative. So, increasing the threshold value will cause both TP and FP numbers to decrease, leading to lower TPR and FPR.

For each different threshold value, we get different TP and FP rates. Plotting the result gives us the ROC curve. But how does the ROC curve help us find out the success of a classifier?

On the contrary, worse classifier performance reduces the area. AUC is often used as a classifier comparison metric for machine learning problems. 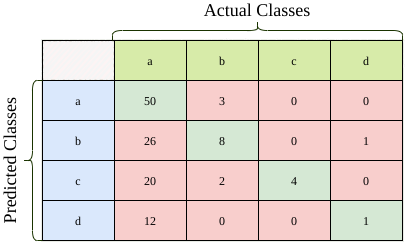 Suppose a certain classifier generates the confusion matrix presented above. There are 127 samples in total. Now let’s see how well the classifier performed.

So, the classifier correctly classified almost half of the samples. Given we have five labels, it is much better than the random case.

Class by class, we can categorize each element into one of TP, TN, FP, or FN. Hence, we can rewrite the precision formula as:

Similarly, the recall formula can be rewritten as:

Correspondingly, we can calculate precision and recall values for other classes.

In this tutorial, we have investigated how to evaluate a classifier depending on the problem domain and dataset label distribution. Then, starting with accuracy, precision, and recall, we have covered some of the most well-known performance measures.

Precision and recall are two crucial metrics, each minimizing a different type of statistical error. F-1 Score is another metric for measuring classifier success, and it considers both Type I and Type II errors.

We have briefly explained the ROC curve and AUC measure to compare classifiers. Before concluding, we have discussed some differences between binary and multiclass classification problems and how to adapt the elementary metrics to the multiclass case.