Gradient Descent is a widely used iterative optimization algorithm that is used to find the minimum of any differentiable function. Each step that is taken improves the solution by proceeding to the negative of the gradient of the function to be minimized at the current point. In each iteration, the empirical cost

of a function is calculated and the parameters used to reach the global minimum are updated accordingly. In order to find the optimal solution, this method takes into consideration the complete training dataset through every iteration, which may become time-consuming and computationally expensive.

A common problem, in the way of finding the global minima, is that GD may converge to a local minimum and may not be able to get away from it; thus, failing to approach the minimum of a function.

We can see how Gradient Descent works in the case of a one-dimensional variable in the image below: 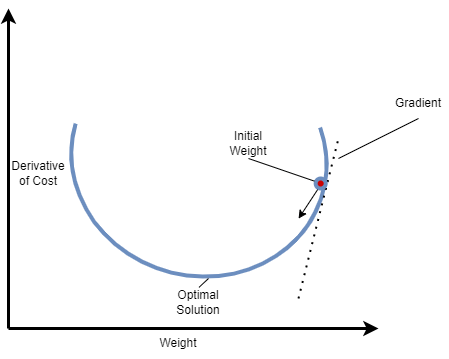 The formula of Gradient Descent that updates the weight parameter

denotes the weights that need to be updated, alpha is the Learning Rate of the algorithm, a hyperparameter that controls how much to change the model in response to the estimated error,

is the cost function, while

refers to the iteration index.

Stochastic Gradient Descent is a drastic simplification of GD which overcomes some of its difficulties. Each iteration of SGD computes the gradient on the basis of one randomly chosen partition of the dataset which was shuffled, instead of using the whole part of the observations. This modification of GD can reduce the computational time significantly. Nevertheless, this approach may lead to noisier results than the GD, because it iterates one observation at a time.

The formula of Stochastic Gradient Descent that updates the weight parameter

The notations are the same with Gradient Descent while

is the target and

denotes a single observation in this case.

Mini Batch Gradient Descent is considered to be the cross-over between GD and SGD. In this approach instead of iterating through the entire dataset or one observation, we split the dataset into small subsets (batches) and compute the gradients for each batch.

The formula of Mini Batch Gradient Descent that updates the weights

The notations are the same with Stochastic Gradient Descent where

is a hyperparameter that denotes the size of a single batch.

For a more algorithmic representation, let’s assume the scenario below:

In the above hypothesis, the computation of

differs for every approach. The three different methods calculate

until it converges accordingly.

is the number of training samples. We can see that, depending on the dataset, Gradient Descent may have to iterate through many samples, which can lead to being unproductive.

As we can see, in this case, the gradients are calculated on one random shuffled part out of

In this case, the gradients are calculated with subsets of all observations in each iteration. This algorithm converges faster and concludes in more precise results.

It is important to make a head-to-head comparison between the two main approaches, by analyzing the advantages and disadvantages of each one.

Mini Batch Gradient Descent is the bridge between the two approaches above. By taking a subset of data we result in fewer iterations than SGD, and the computational burden is also reduced compared to GD. This middle technique is usually more preferred and used in machine learning applications.

In this article, we walked through Stochastic Gradient Descent techniques. In particular, we discussed how these different algorithms work and their approach to reaching the global minimum of a function. Finally, we talked in detail and analyzed the advantages and disadvantages of each method, and we found why the most commonly used algorithm is the Mini Batch Gradient Descent.