In this tutorial, we’ll talk about three basic terms in deep learning that are epoch, batch, and mini-batch. First, we’ll talk about gradient descent which is the basic concept that introduces these three terms. Then, we’ll properly define the terms illustrating their differences along with a detailed example.

To introduce our three terms, we should first talk a bit about the gradient descent algorithm, which is the main training algorithm in every deep learning model.

The gradient descent algorithm works in two steps that are performed continuously for a specific number of iterations:

In the image below, we can see how gradient descent works in the case of one-dimensional variables: 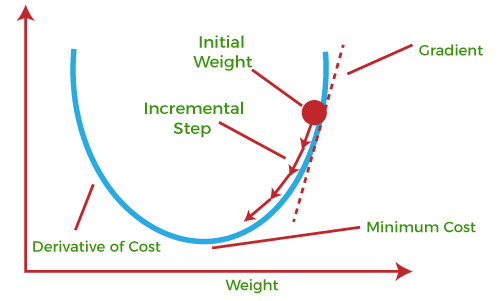 There are three types of the gradient descent algorithm based on the amount of training data that are used to perform one iteration of the algorithm.

In batch gradient descent, we use all our training data in a single iteration of the algorithm.

So, we first pass all the training data through the network and compute the gradient of the loss function for each sample. Then, we take the average of the gradients and update the parameters using the computed average.

In the diagram below, we can see how batch gradient descent works:

The previous method can be very time-consuming and inefficient in case the size of the training dataset is large. To deal with this, we use stochastic gradient descent, where we use just one sample in a single iteration of the algorithm.

In the diagram below, we can see how stochastic gradient descent works:

A drawback of the stochastic gradient descent is the fact that by using just one sample, the loss function is not necessarily decreasing in each iteration. In the long run, the method will never reach the global minimum since there will be a lot of fluctuations in the value of the loss function.

In the diagram below, we can see how mini-batch gradient descent works when the mini-batch size is equal to two:

Now that we have presented the three types of the gradient descent algorithm, we can move on to the main part of this tutorial.

An epoch means that we have passed each sample of the training set one time through the network to update the parameters. Generally, the number of epochs is a hyperparameter that defines the number of times that gradient descent will pass the entire dataset.

If we look at the previous methods, we can see that:

We have already defined the other two terms but let’s re-introduce them more formally.

Let’s assume that we have a dataset with

samples, and we want to train a deep learning model using gradient descent for

In this tutorial, we talked about the differences between an epoch, a batch, and a mini-batch. First, we presented the gradient descent algorithm that is closely connected to these three terms. Then, we defined the terms and presented a simple example.