The algorithm, published in 1959 and named after its creator, Dutch computer scientist Edsger Dijkstra, can be applied to a weighted graph. The algorithm finds the shortest path tree from a single source node by building a set of nodes with minimum distances from the source.

Dijkstra’s algorithm makes use of breadth-first search (BFS) to solve a single source problem. However, unlike the original BFS, it uses a priority queue instead of a normal first-in-first-out queue. Each item’s priority is the cost of reaching it from the source.

Before going into the algorithm, let’s briefly review some important definitions.

The graph has the following:

The following example illustrates an undirected graph with the weight for each edge:

To implement Dijkstra’s algorithm, we need to initialize three values:

The algorithm proceeds as follows:

Let’s go through an example before coding it with the pseudocodes.

Given the following undirected graph, we’ll calculate the shortest path between the source node

and the other nodes in our graph. To begin, we mark

; for the rest of the nodes, the value will be

as we haven’t visited them yet: 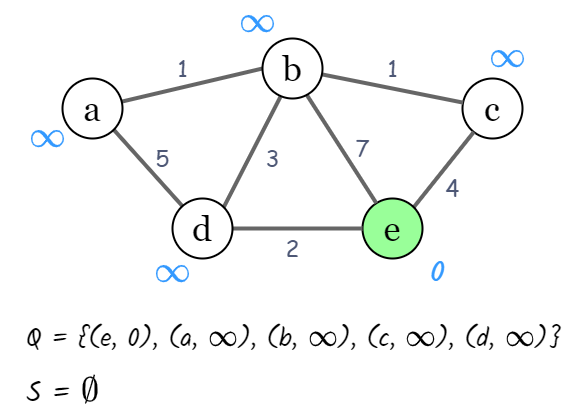 At this step, we pop a node with the minimal distance (i.e., node

as the current node, and mark the node

). Next, we check the neighbors of our current node (

) in no specific order.

. In addition, we update the priority queue after recalculating the distances of these nodes: 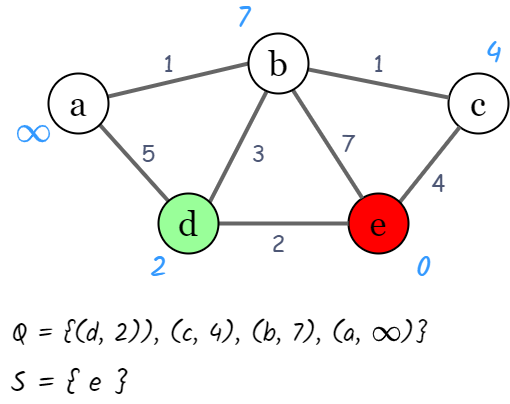 . That node will be un-visited with the smallest minimum distance. In this case, the new current node is

After repeating these steps until

is empty, we reach the final result of the shortest-path tree: 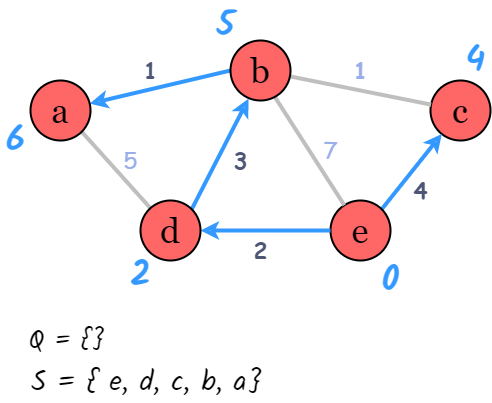 The following pseudocode shows the details of Dijkstra’s algorithm:

For a more in-depth explanation of Dijkstra’s algorithm using pseudocodes, we can read an Overview of Dijkstra’s Algorithm. Then we can learn how to implement Dijkstra Shortest Path Algorithm in Java.

There are multiple ways we can implement this algorithm. Each way utilizes different data structures to store the graph, as well as the priority queue. Thus, the differences between these implementations leads to different time complexities.

In this section, we’ll discuss the time complexity of two main cases for Dijkstra’s implementations.

This case happens when:

be the number of edges and vertices in the graph, respectively. Then the time complexity is calculated:

This case is valid when:

For a more in-depth overview and implementation of the binary heap, we can read the article that explains Priority Queue.

and extract the node with minimal

. Therefore, the time complexity will be:

Overall, the Fibonacci heap-based implementation will run at the fastest speed. Conversely, the slowest version will be the unordered list-based priority queue version. However, if the graph is well-connected (i.e., having a huge number of edges, aka, having high density), there is not much difference between these three implementations.

For a detailed comparison of the running time with different implementations, we can read the experimenting with Dijkstra’s algorithm article.

For example, the following figure illustrates the running time comparison between six variants when the number of nodes is increasing: 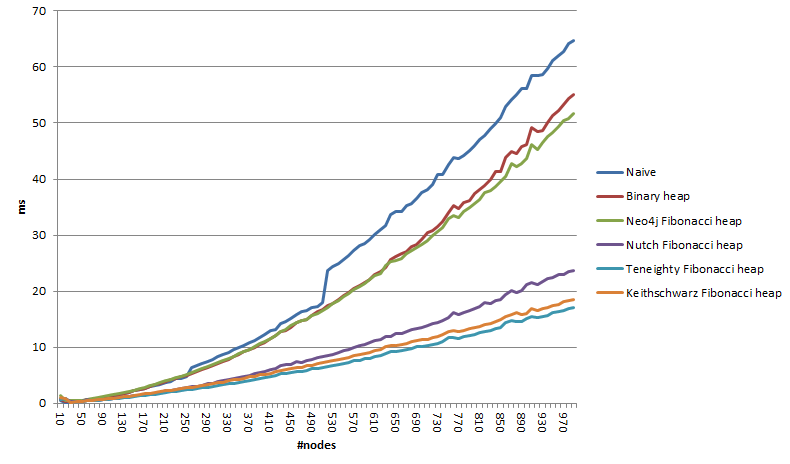 In this article, we discussed Dijkstra’s algorithm, a popular shortest path algorithm on the graph.

First, we learned the definition and the process of a priority queue. Then we explored an example to better understand how the algorithm works.

Finally, we examined and compared the complexity of the algorithm in three different implementations.