Constrained optimization, also known as constraint optimization, is the process of optimizing an objective function with respect to a set of decision variables while imposing constraints on those variables.

Now, let’s examine situations where a function is constrained. A constraint is a hard limit we place on a variable’s value to prevent the objective function from going forever in certain directions: 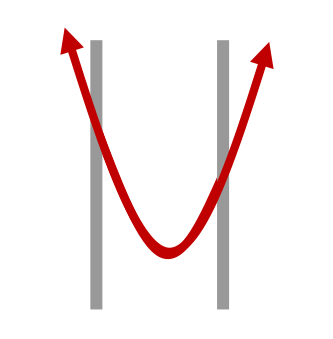 With nonlinear functions, the optima (maximum or minimum values) can either occur at the boundaries or between them:

As we can see, the maximum or minimum values can occur in the interior or at boundaries.

In contrast, with linear functions, the maximum or minimum values occur only at boundaries: 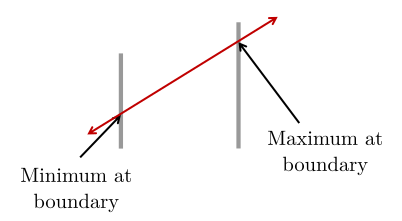 The following formulation describes the general (canonical) form of a constrained minimization problem:

is the vector of decision variables;

is the objective function that needs to be optimized;

are constraints that are required to be satisfied.

If we need to maximize the objective function, e.g., the utilization efficiency of network resources, we can negate it to make it fit the general form:

Depending on the objective function and constraints, there are several types of constrained optimization problems.

Here’s an example of a problem with nonlinear constraints:

Now let’s see how we can apply constrained optimization to real-world problems. Let’s suppose we want to maximize the area of a rectangle while keeping its perimeter equal to a predefined value 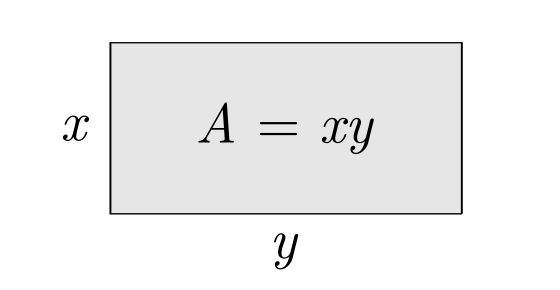 As we see, the area is

, and that will be our objective function. Further, since the perimeter needs to be equal to

, we have a constrained optimization problem:

This problem has a quadratic objective function (

) and a linear constraint, so it falls into the QP category.

Let’s now see how we can solve constrained optimization problems.

There is, unfortunately, no universal method for solving all types of optimization problems.

Most of these methods, such as the branch-and-bound algorithm, are exact. Exact optimization techniques are guaranteed to find the optimal solution. The price for such guarantees is that they can take a lot of time to complete. In contrast, inexact methods don’t guarantee finding the optimum but usually produce a sufficiently good solution quickly. Metaheuristics such as the Grey-Wolf Optimization algorithm fall into the category of inexact methods and are frequently used when we need to find any solution quickly.

Let’s explain the substitution method using a simple example with an equality constraint:

As we see, that’s the same problem as in the above example with a rectangle. The only difference is that here,

isn’t a free parameter but a known value

In our example, the constraint gives us a simple substitution:

As a result, we can rewrite the objective function:

The maximum value of

should satisfy the first-order derivative condition:

, and the maximum value of

They all perform built-in exact methods (e.g., simplex) and usually combine them with inexact algorithms to reach a solution faster. For instance, CPLEX uses a node heuristic along with the branch-and-cut algorithm.