In this tutorial, we’ll study the Bitonic Sort algorithm. Just like the odd-even transposition sort, Bitonic Sort is also a comparison-based sorting algorithm we can easily parallelize.

Let’s say we have an unsorted array

to be sorted in monotonically non-decreasing order. For instance, if we have

at the input, we want to get the output

A bitonic sequence is the key concept of the bitonic sort. So, let’s start by defining it.

is called a bitonic sequence if it fulfils either of the following two conditions:

For instance, the array

is a bitonic sequence. Its monotonicity changes at 45:

For Bitonic Sort to work effectively, the number of elements in the input array needs to be a power of two. If that isn’t the case, we can extend the array with

elements larger than those in it. That way, we can make the number of elements of

a power of two. After sorting, we output the first

elements since all the additional ones are larger.

This algorithm essentially runs two procedures. First, it recursively converts the input array to a bitonic sequence. Then, it merges the two monotonic halves in a way that sorts the entire array:

The base case of the first procedure, BitonicSort, is when there’s only one element in

. As per the definition, single-element arrays are bitonic. The variable

shows whether the subsequence at hand should be ascending or descending.

Now, let’s look into the pseudocode of Bitonic Sort:

The algorithm takes as input an unsorted array

is a power of 2 since we can always extend the array as explained above. The variable

stores the sorting direction. Initially, we set it to

Let’s say the input array is

The following figure shows the execution until the entire array becomes a bitonic sequence with two halves of opposite monotonicities: 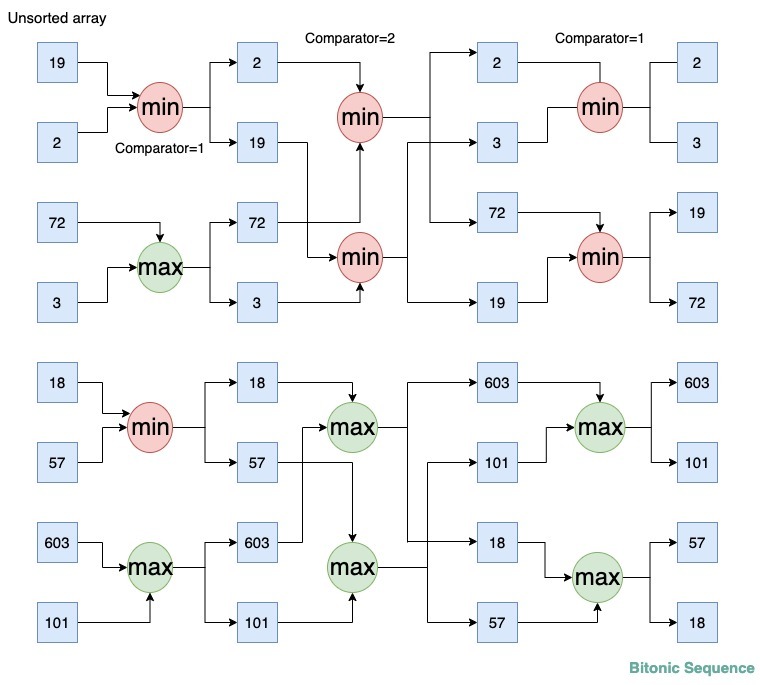 As the name suggests, the

in the ascending order whereas the

function sorts and stores them in the descending order. The variable

denotes the number of elements to skip from the current elements for comparison.

In the first step, we form two 4-element bitonic sequences. First, we apply

to the first two elements, and

steps to get our bitonic sequence. Now, we move to sort it.

Here, we show the complete bitonic sort from the above generated bitonic sequence: 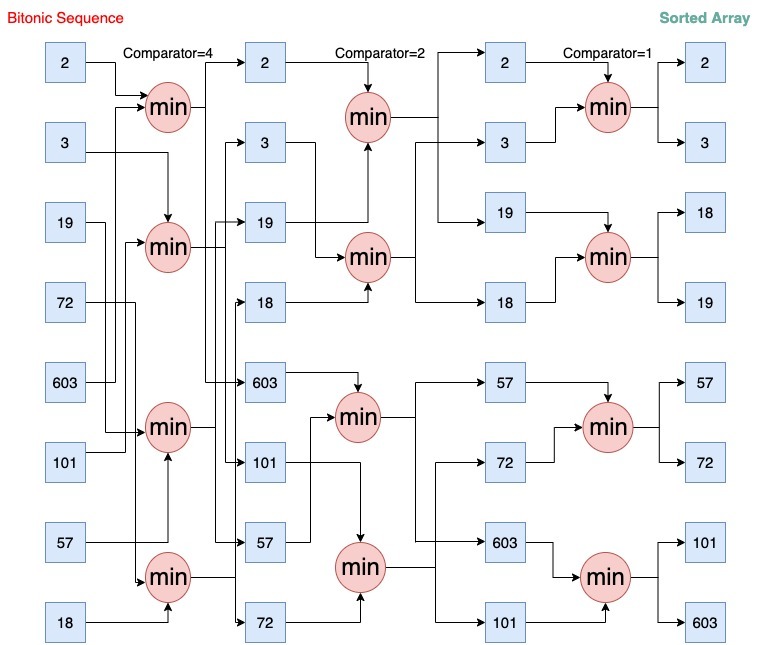 The procedure that sorts the array, in the end, is Merge. In essence, we apply

to elements with closer and closer indices until the entire sequence is sorted.

Now, we repeat the above process for both halves recursively. We set

levels in the recursion tree of

since each call halves the input size.

pairs in one and

pairs in the other subsequence, and so on:

From there, the time complexity of Bitonic Sort is

Bitonic sort is a sequential sorting algorithm that is inefficient when sorting large volumes of data. But, when performed in parallel, it performs much better.

Parallel processing works by dividing data among processors and processing each chunk at the same time. When all the processors complete their jobs, we combine their partial outputs to produce the final result. So, this way, we can reduce the time needed to do all the steps.

Here, due to the predefined sequence of comparison sequence, the comparisons are independent of the data that is to be sorted. Additionally, the load balancing features help maintain equal load among all the processors.

The parallel version, when we run it on

Even though the number of comparisons done by bitonic sort is greater than those of other, more popular sorting algorithms such as QuickSort, Bitonic Sort works better in parallel implementations.

The reason is that it always compares input elements in a predefined way that doesn’t depend on the actual input. Thus, we get the best results when we run it on a system with a parallel processor array or on a mesh-based hardware system.

In this article, we have studied the Bitonic Sort algorithm. It sorts an array by creating bitonic sequences and reducing the problem size to half at each step. It can run very fast as a parallel algorithm on a multiprocessor system.