In this tutorial, we’ll study the Odd-Even Transposition Sort algorithm. It’s a variant of the classical Bubble Sort, a comparison-based sorting method.

The Odd-Even Transposition Sort was originally developed for running on a multi-processor system, although we can run it on a single processor as well. We also refer to it by the names of Brick Sort and Parity Sort.

In a sorting problem, we are given an unsorted array

to be sorted in monotonically non-decreasing order. For instance, if we are given

at the input, we want to get the output

The Odd-Even Transposition Sort performs the same as the classical Bubble Sort when we run it on a uniprocessor system. However, we harness its full power when running it as a parallel algorithm on a multiprocessor system.

The algorithm follows the divide-and-conquer methodology. The underlying idea is that we process the given array by iterating two phases. We call them the odd phase and the even phase.

In the odd phase, we compare all the odd-indexed elements with their immediate successors in the array and swap them if they’re out of order. In the even phase, we repeat this process for all even-indexed elements and their successors. Then, we iterate over these two phases until we find no more elements to swap. At that point, we exit the algorithm since the array is sorted.

Here’s the pseudocode of the odd-even transposition sort:

The algorithm takes as input an unsorted array

and the number of elements

in it. It uses a variable

is sorted. In the beginning,

since we don’t know if

In each iteration of the

loop, the algorithm executes odd and even phases.  If it performs no swaps, it sets

and exits the loop.

Let’s say the given array is

We repeat odd and even phases at subsequent steps until we sort the entire array: 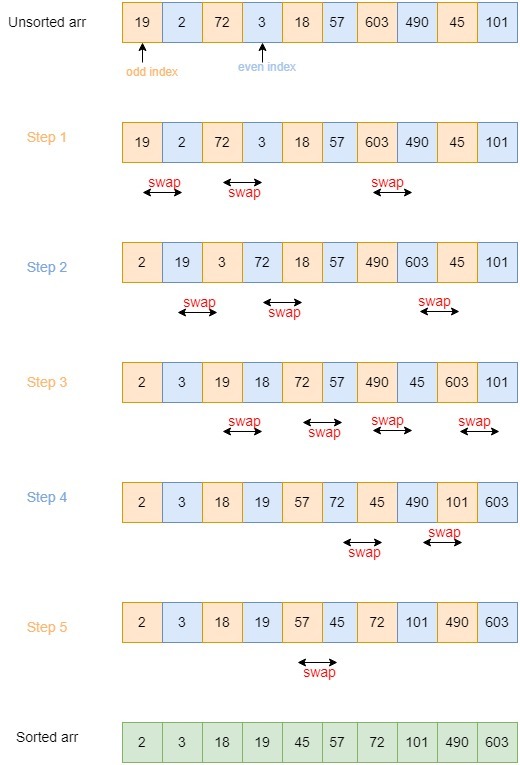 In this section, let’s discuss the space and time complexity of this algorithm for the uniprocessor case.

On a single processor, the algorithm’s time complexity is

comparisons for each of the

This algorithm’s space complexity is

. The space complexity in terms of auxiliary storage is

because the odd-even transposition sort algorithm is an in-place sorting algorithm. Apart from the space for the input array, it requires only a single temporary variable for swapping the elements and another one for iterating over the array.

A sequential algorithm such as this one may be inefficient when sorting large volumes of data. But, when performed in parallel, it can run fast.

A parallel algorithm runs on multiple processors or cores at the same time and then combines the partial outputs to produce the final result.

processors. In such a scenario, each processor takes as input a sub-array containing

successive elements of the input. Then, the sub-arrays get sorted in parallel. Afterward, we merge all these smaller sorted sub-arrays to get the final sorted array.

In this article, we have studied a variant of Bubble Sort called Odd-Even Transposition Sort.

It offers the same efficiency as Bubble Sort when run on a uniprocessor system. But, it is more efficient when we execute it in parallel.