In this tutorial, we’ll discuss the problem of finding a cycle in a singly linked list and the starting point of this cycle.

First, we’ll explain the general idea of the problem and then discuss two approaches to solving it. Secondly, we’ll present two exceptional cases and see how can one of the approaches be updated to handle them.

In the end, we’ll present a comparison between all the provided approaches.

nodes. We want to check if the list is cyclic or not. Also, we want to find the beginning of this cycle, if found.

Before we start with the solutions, we need to know what the cycle in a list means.

As we know, the list is a collection of nodes in which each node contains a reference (in other words, a link) to the next node. We say that the list is cyclic when the last node points to one of the nodes in the list 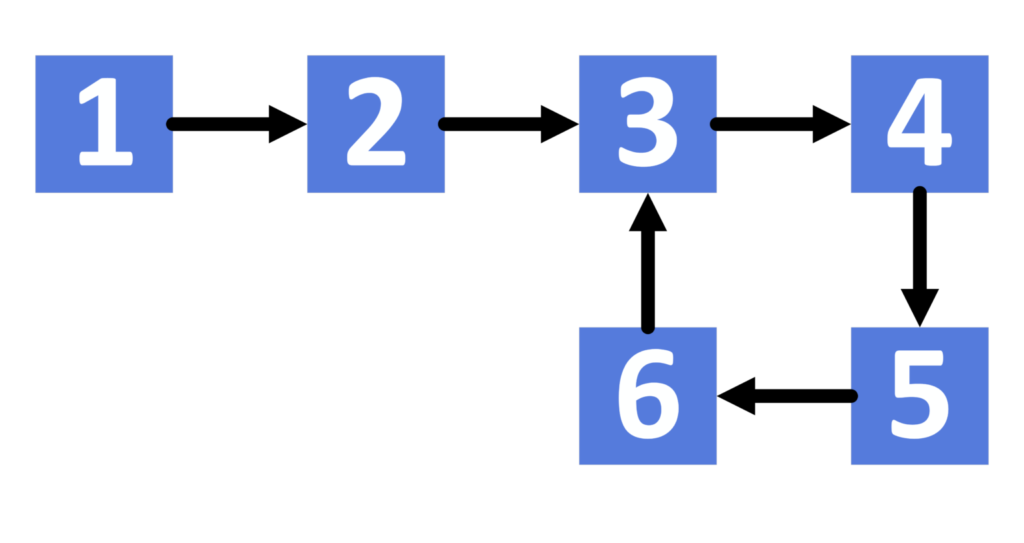 Note that we can have only one cycle inside a list. Besides, the cause of the cycle will always be that the last node is pointing to a node inside the list because each node points to exactly one node.

In the simple list with no cycles, we can iterate over its elements using

The reason is that, since we don’t have a cycle, the last element points to

. Take a look at the example that shows an acyclic list: 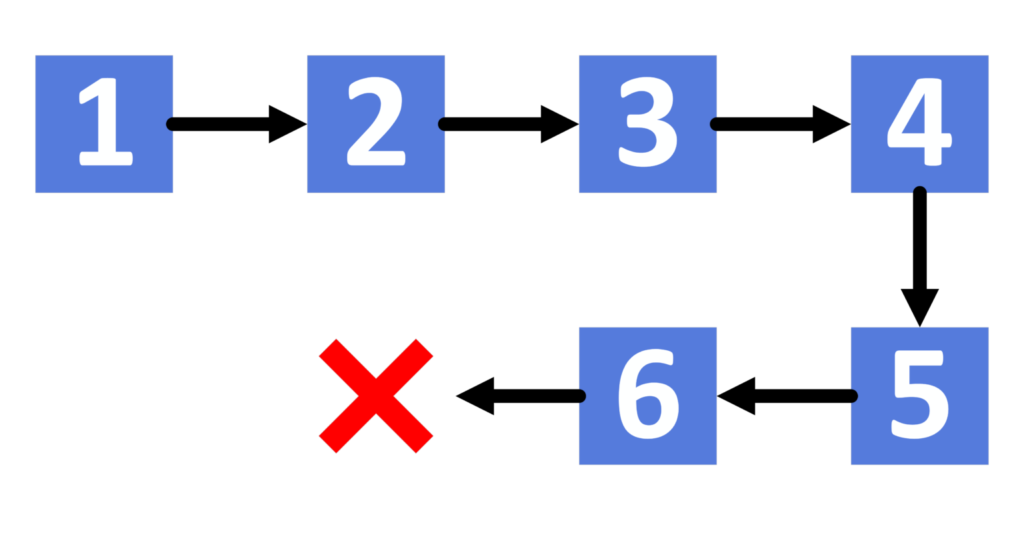 However, when we have a cycle, we can’t iterate using the same way. The reason is that the last node points to another one. Therefore, the algorithm will enter an infinite loop.

To solve this issue, we can add a variable to each node that tells us whether we’ve visited it before or not. Let’s call it

Take a look at the implementation of the visited approach:

In the first step, we check whether there is a cycle in

. At first, we initialize

. This is so that if we can’t find any loop, the

Next, we iterate over the nodes in

and stop the loop.

In case we haven’t visited this node before, we mark it as visited and continue to the next element.

Once we’re done with the first step, we mark all nodes as unvisited to restore the list to its original state. This is to allow us to use this variable in other algorithms.

The complexity of the visited approach is

4. Special Cases for the Visited Approach

In some problems or program language, it’s tough to edit the structure of the nodes. As a result, we might not be able to add the

variable. However, we might have a unique variable for each element. Let’s call it

is an integer in the range

is relatively small, we can add a new boolean array with

elements. In each step, we check the value of

, rather than checking the value inside the element.

, which will hold the resulting answer. Also, we’ll initialize the array

. For each node, we check whether we’ve visited it before or not. To do this, we use the

If we haven’t visited it before, we assign

to its location inside

and move to the next. Otherwise, we update

and break the loop.

Note that if we have negative values, such that the id’s range is

, we can still use this approach after shifting all values by

. Hence, the id’s range will be

and the position of id

is the maximum value of the ids.

is not an integer or has a relatively large value, we can’t use an array. Thus, we solve this case by using either a TreeSet or a HashSet data structure. In this tutorial, we’ll use a TreeSet to store the visited elements.

Similarly to the previous approach, we initialize

, which will hold the resulting answer. Besides that, we define

as a new empty TreeSet that will hold the visited ids.

Same as before, we’ll use the iterator

. However, in this approach, we’ll use the

data structure to check whether we reach a visited node.

If we don’t find the

, we move to the next element and add it to

. Otherwise, we update the

and break the loop.

In this section, we’ll explain a different idea to finding a cycle in a list.

Next, we iterate over

. Each time, we move

one step, while we move

two steps. We continue this process until we either reach

, we declare that no cycle is found.  On the other hand, if

, then we reached a loop and

points to one of its nodes.

To find the start of the cycle, we must find the size of the loop first. We can do this by moving

only until it becomes equal to

again and counting the steps. Hence, we get the size of the cycle denoted as

from the beginning of

one step until they meet. At this point we can either return

as the beginning of the cycle.

We can split this implementation into four parts:

is the size of the list. Let’s explain the reason behind the linear complexity.

First of all, let’s explain the idea behind the two iterators. Since

is moving twice as fast as

will be the first one to enter the cycle. After this,

will enter the cycle.

At this point, we can be sure that

will catch up to

steps, because it’s moving faster.  Before this happens, we have multiple cases:

moves two steps forward, the distance between both iterators will reduce by one step each time until they finally meet.

As a result, we can conclude that if we have a cycle, then

will catch up to

, and they’ll meet at the same location after no more than

To get the beginning of the cycle, we started

from the beginning of

node. Let’s prove that they must meet after no more than

First of all, let’s define the distance as the number of steps needed for

. In the beginning, the distance equals

, which is the size of the cycle.

Since both iterators move at the same speed, this distance will remain the same. Also,

will be the first to enter the cycle, followed by

steps. When this happens, suppose

However, since both of them are inside the cycle, if

steps forward, it’ll reach its current location. The reason is that the cycle has

steps from a node will get us back to the same node.

As a result, the only way that

is still in front of

steps is if they’re at the same node. Hence, this node is the starting node. Also,

steps to reach the beginning of the cycle.

Take a look at the differences between previous approaches:

By memory complexity, we mean the additional needed memory regardless of the memory already occupied by the list.

As we can see, the visited approach is simpler to implement and easier to understand. But, to use it, we need to add the

variable to the nodes of the linked list. Hence, the

Regarding the TreeSet approach, its complexity is bigger than other approaches. Thus, it’s usually not the best one to go with.

A two-pointers approach is a general approach that can handle any case. Therefore, we can always use it.

Nevertheless, it takes a little more time than the visited approach because we iterate over each element about six times.

In this tutorial, we discussed finding a cycle in a singly linked list and the starting point of this cycle.

Firstly, we explained the general idea of the problem and discussed two approaches that solve it. Besides that, we presented two special cases related to the first one.

In the end, we showed a comparison between all the approaches in terms of time and memory complexity. Also, we discussed the best practices for using each of them.