In this tutorial, we’ll discuss the methods and techniques used for handwriting text recognition

Let’s start by understanding the online algorithm for character recognition. This method entails the automated conversion of text as it is typed on a specific digitizer. In this step, a sensor detects pen-tip motions as well as pen-up/pen-down switching to produce a signal. Then, transform the resulting signal into letter codes that may be used in computer and text-processing programs.

The goal of this phase of pre-processing is to remove irrelevant information from the incoming data that might interfere with recognition. In short, this is about speed and precision. Pre-processing often includes binarization, sampling, normalization, smoothing, and denoising.

In this phase, we determine the important qualities that distinguish the cases that are independent of one another. The goal of this stage is to emphasize key information for the recognition model. This information might include pen pressure, velocity, or changes in writing direction.

This is the decision-making phase of the recognition system. Various models are employed to map the extracted characteristics to different classes and, as a result, identify the letters or words that the features represent.

Here’s an example of the classical processing for text recognition using an image as input: 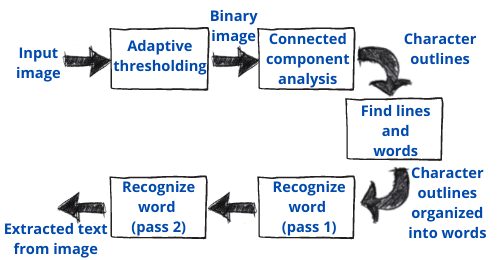 These modern approaches employ convolutional networks to extract visual information from many overlapping windows of an input. So, the feature extraction is automated and the convolutional network doesn’t need feature engineering. Then, we use a recurrent neural network to generate character probabilities from the visual information. The image below represents an example of a deep learning algorithm:

The handwriting recognition system requires handling a “stream of data” (a single input is mapped onto multiple outputs) since the number of symbols in output usually varies. For example, we have one input (for example an image as input) and we want to have the group of characters, words, and lines. This means that once we detect a character, the next cannot be a random character. In other words, we are dealing with sequential data.

So, if we try to rephrase this statement it’s like we have one input and a lot of outputs. There are different solutions to develop a “stream of data” for Handwriting recognition:

Let’s take a look at an example of an offline Handwritten Text Recognition (HTR) system that converts text from scanned images into digital text:

represents the neural network that maps an image

to a character sequence

. So, the text is identified at the character level. Therefore, the model recognizes the words or texts that are not in the training data.