Data structures are one of the major branches of computer science that defines the organization, management, and storage of data for efficient access and modification. There are numerous data structures available based on the storage, access, and usage types.

In this tutorial, we’ll look into several advanced data structures.

A self-organizing list lets us reorder its elements based on certain algorithms to improve the average element access time. It is similar to a linked list except for the reorganizing capabilities.

In a linked list, the searching process requires comparing each element of the list with the item until the item is found or we reach the end of the list. Thus, in the worst-case scenario, we need to search

is the size of the list. A self-organizing list attempts to improve the average search time by moving the accessed elements towards the head of the list.

Let’s discuss several algorithms that decide the reorganizing process. We can start with the move to the front method. 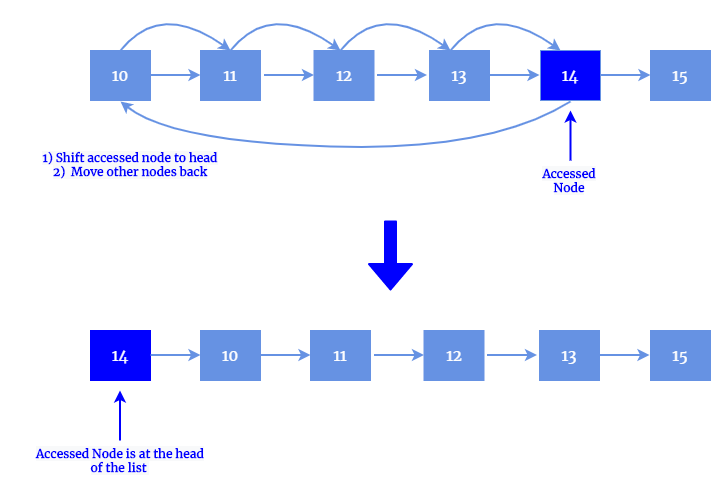 Next, we have a count method. In the count method, each method keeps track of the number of times it is searched. Nodes are ordered based on their count value in descending order:

A circular buffer or ring buffer is a data structure that uses a single fixed-size buffer as if were connected end-to-end. The name is because the buffer’s start and end are connected, and it looks like a circle.

Initially, a circular buffer starts empty and has a defined length. In the following diagram, the buffer has a size of five:

After that, imagine two more elements are added to the Circular Buffer — two & three — which is placed after one:

If the buffer has five elements, then it is full:

Another interesting property of the circular buffer is that when it is full and a subsequent write is performed, it starts overwriting the oldest data. In the current example, two more elements — A & B — are added, and they overwrite the three and four:

A gap buffer is a data structure that lets us perform efficient insertion and deletion operations clustered near the same location. This is a popular data structure in the text editors where most of the text changes occur at or near the cursor’s current location. The text is stored in a large buffer in two contiguous segments, with a gap between them for inserting new text:

Moving the cursor involves copying text from one side of the gap to the other. An insert operation adds the new text at the end of the first segment, whereas a deletion deletes it.

Let us explain this with an example. The initial state is shown below:

A user inserts a new text:

The user moves the cursor after the word the:

The user adds a new word named lazy, and the system creates a new gap:

A text in a gap buffer is represented as two separate strings that take very little extra space. Thus, it can be searched and displayed very quickly, compared to more sophisticated data structures such as the linked lists. However, operations at different locations in the text and ones that fill the gap (i.e., requiring a new gap to be created) may require copying most of the text, which is especially inefficient for large files.

Gap buffers implementations assume that recopying text rarely occurs enough that its cost can be amortized over the more common cheap operations. This makes the gap buffer a simpler alternative to the Rope data structure for use in text editors.

A hashed array tree is a data structure that maintains an array of separate memory-fragments or leaves that store data elements. The major benefit of this data structure is that unlike dynamic arrays, which store elements in a contagious memory area, it reduces the amount of element copy otherwise needed due to automatic resizing. 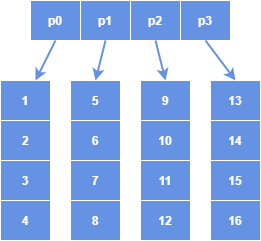 A rope is a tree data structure composed of smaller strings used to store and manipulate a long string. Rope, also knows as the cord is effective for this purpose. For instance, a text editing program can use a rope to represent a text so that it can manage the insert, delete, and update operations effectively:

A rope is a type of binary tree in which each lead node holds a string and a length. Each node further up in the tree holds the sum of the length of all leaves in its left subtree. For example, the node with weight nine gets its value as its left subtree has the sum of length (Hello_) six and (my_) three.

time. For many sequences of non-random operations, the splay trees perform better than other search trees.

All normal operations of a Splay tree are based upon a basic operation, which is known as splaying. The splaying the tree for an element rearranges the tree so that the element in operation appears at the root of the tree. There are several ways this can be achieved. For instance, one can perform a basic binary search to find the element in operation in the tree and then use tree rotation techniques to move the element at the top of the tree. There are other top-down algorithms that can combine the search and the tree rotation in a single phase.

In the above diagram, we are searching the element 20 which is at the leaf node. At the end of the rotations, element 20 is moved to the root of the tree, and also the tree is balanced.

In this article, we talked about several advanced data structures.

Lastly, we learned about the non-linear data structure that includes trees, heaps, and graphs. In this category, we discussed Rope, Splay Tree, and Binary Heap data structures.