User management is very complex, when implemented properly. No surprise here. Not having to roll all of that out manually, but instead integrating a mature, fully-fledged solution - yeah, that makes a lot of sense.
That's basically what Frontegg is - User Management for your application. It's focused on making your app scalable, secure and enjoyable for your users.
From signup to authentication, it supports simple scenarios all the way to complex and custom application logic. Have a look: >> Elegant User Management, Tailor-made for B2B SaaS
November Discount Launch 2022 – TEMP TOP (NPI)
We’re finally running a Black Friday launch. All Courses are 30% off until next Friday:

Before we get started, though, we need to make sure we have a JAVA_HOME variable set to a JDK. Anything after version 8 will work for WildFly 17.

WildFly comes with standalone and domain modes by default. Let's take a look at standalone first.

After downloading and extracting WildFly to a local directory, we need to execute the user script.

The admin user will already exist; however, we'll want to update the password to something different. Updating the default admin password is always best practice even when planning to use another account for server management.

The UI will prompt us to update the password in option (a):

After changing the password, we need to run the OS-appropriate startup script:

This quick and easy setup is great for a lone instance running on a single server, but let's check out domain mode for multiple instances.

As mentioned above, the domain mode has multiple server instances being managed by a single host controller. The default number is two servers.

Similarly to the standalone instance, we add a user via the add-user script. However, the startup script is appropriately called domain rather than standalone.

After running through the same steps for the startup process, we now hit the individual server instances.

We'll take a look at that odd port configuration for server two a bit later.

First, let's update the pom.xml to build a WAR. We'll change the packaging element and add the maven-war-plugin:

Next, we need to alter the Application class to extend SpringBootServletInitializer:

And override the configure method:

Now, we can deploy it.

Let's look at how easy it is to deploy our new WildFly application through the console.

Secondly, we browse to the target directory for the Spring Boot application and upload the WAR file. Click Next to continue, and edit the name of the new application.

As a result of the successful application deployment, let's review some of the common configuration properties.

For these common properties, viewing them in the administration console is the most convenient.

First of all, let's take a look at the Subsystems — each one has a statistics-enabled value that can be set to true for runtime statistics: 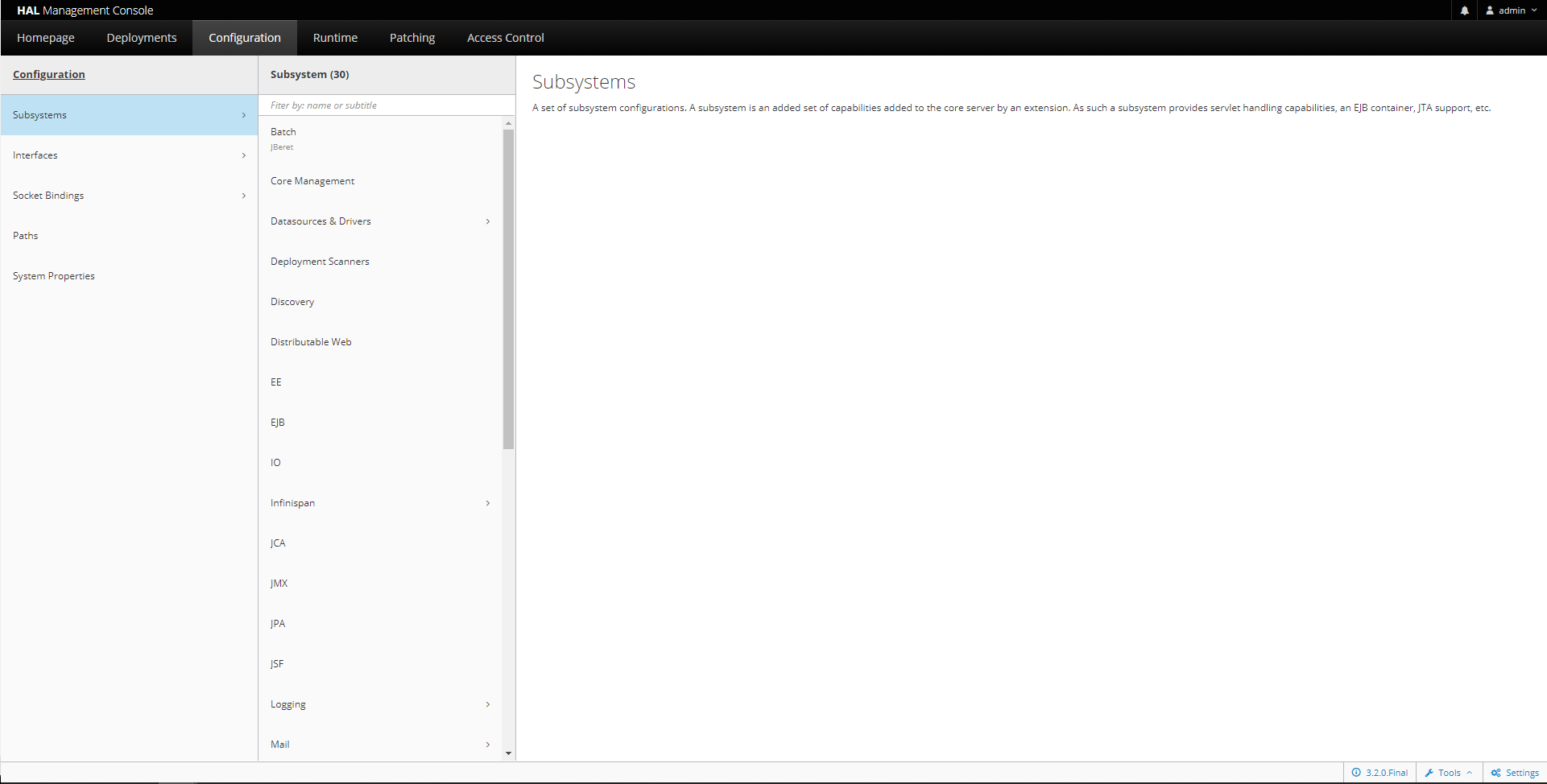 Under the Paths section, we see a couple of the important file paths being used by the server:

As an example, using specific values for the configuration directory and log directory is helpful:

In addition, the Datasources and Drivers section provides for managing external data sources and different drivers for data persistence layers: 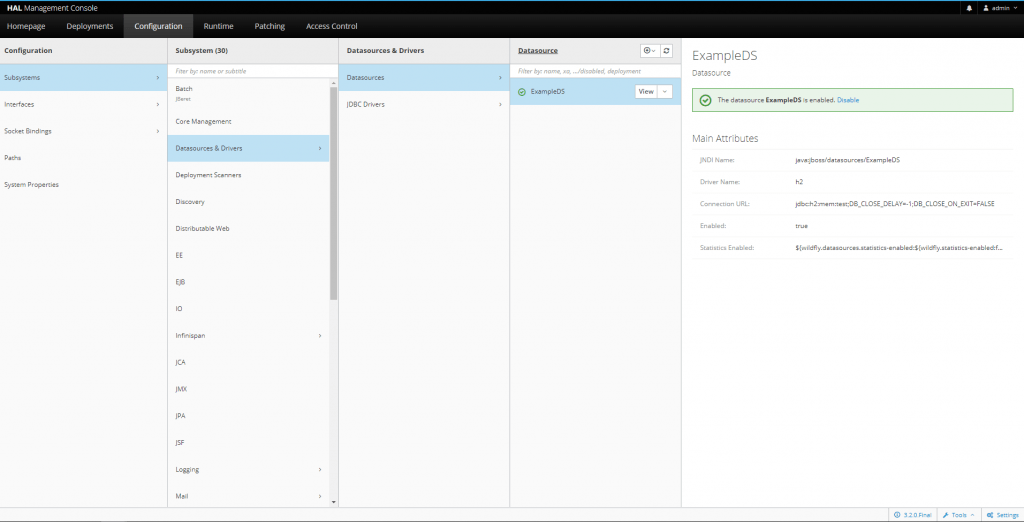 In the Logging subsystem, we update the log level from INFO to DEBUG to see more application logs: 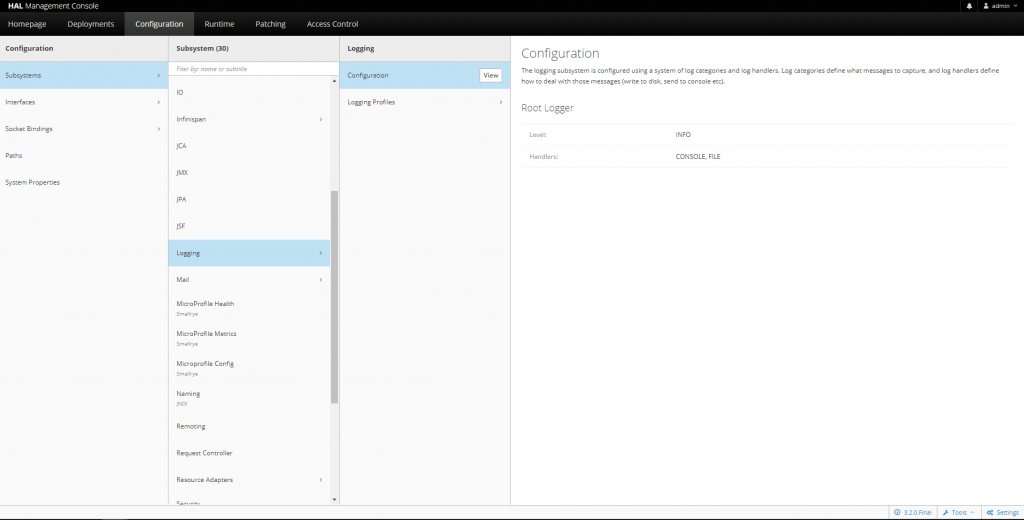 However, we can make a simple update to the port-offset value:

Another great feature of using and configuring the application in a convenient admin console is that those settings can be exported as an XML file. Using a consistent configuration through XML files simplifies managing multiple environments.

The command-line interface for WildFly allows for viewing and updating configuration values the same as the administration console.

To use the CLI, we simply execute:

After that we type:

As a result, we can follow the prompts to connect to our server instance. After connecting, we can access the configuration in real-time.

For example, to view all current configuration as XML when connected to the server instance, we can run the read-config-as-xml command:

The CLI can also be used for runtime statistics on any of the server subsystems. Most importantly, CLI is great for identifying different issues through server metrics.

In this tutorial, we walked through setting up and deploying a first application in WildFly as well as some of the configuration options for the server.

The Spring Boot sample project and export of the XML configuration can be viewed on GitHub.