In this tutorial, we’ll introduce AOP (Aspect Oriented Programming) with Spring, and learn how we can use this powerful tool in practical scenarios.

It's also possible to leverage AspectJ's annotations when developing with Spring AOP, but in this article, we'll focus on the core Spring AOP XML-based configuration.

AOP is a programming paradigm that aims to increase modularity by allowing the separation of cross-cutting concerns. It does this by adding additional behavior to existing code without modifying the code itself.

Instead, we can declare the new code and the new behaviors separately.

Let's briefly go over the concepts and terminology specific to AOP: 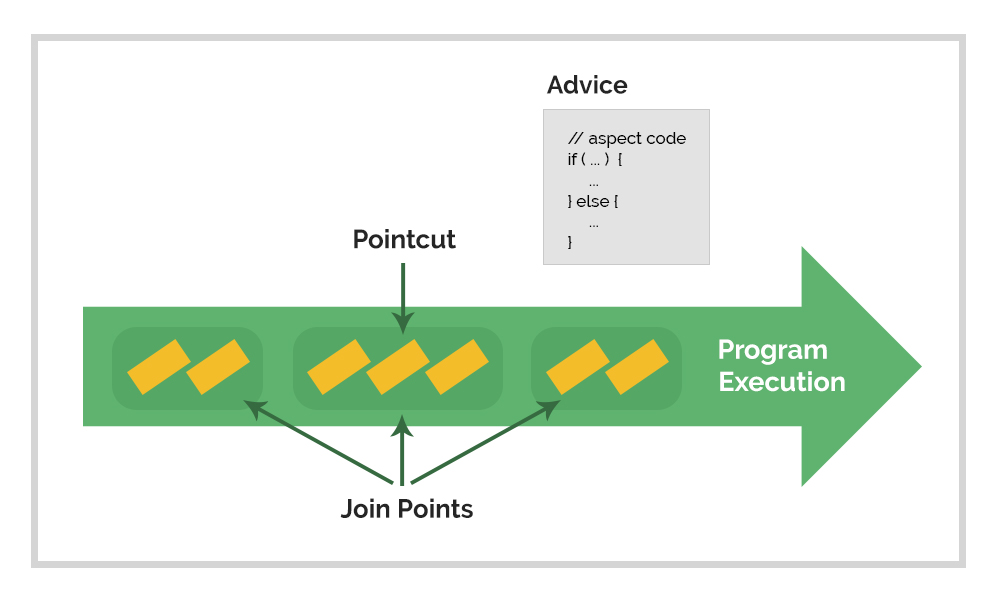 Note that this class is a normal class with business logic, without any Spring-related annotations.

An aspect is a modularization of a concern that cuts across multiple classes. Unified logging can be an example of such cross-cutting concern.

Let's see how we define a simple Aspect:

In the above example, we defined a simple Java class that has a method called afterReturn, which takes one argument of type Object and logs in that value. Note that even our AdderAfterReturnAspect is a standard class, free of any Spring annotations.

In the next sections, we'll see how we can wire this Aspect to our Business Object.

In Spring AOP, a JoinPoint always represents a method execution.

A Pointcut is a predicate that helps match an Advice to be applied by an Aspect at a particular JoinPoint.

We often associate the Advice with a Pointcut expression, and it runs at any Joinpoint matched by the Pointcut.

An Advice is an action taken by an aspect at a particular Joinpoint. Different types of advice include “around,” “before,” and “after.”

In Spring, an Advice is modelled as an interceptor, maintaining a chain of interceptors around the Joinpoint.

Now let's look at how we can wire a Business Object to an Aspect with an After-Returning advice.

Below is the config excerpt that we'd place in a standard Spring config in the “<beans>” tag:

As we can see, we defined a simple bean called simpleAdder, which represents an instance of a Business Object. In addition, we created an instance of an Aspect called AdderAfterReturnAspect.

Of course, XML isn't our only option here; as mentioned before, AspectJ annotations are fully supported as well.

We can use tag aop:config for defining AOP-related configuration. Within the config tag, we define the class that represents an aspect. Then we give it a reference of “doAfterReturningAspect,” an aspect bean that we created.

Next we define a Pointcut using the pointcut tag. The pointcut used in the example above is execution(* org.baeldung.logger.SampleAdder+.*(..)), which means apply an advice on any method within the SampleAdder class that accepts any number of arguments and returns any value type.

Then we define which advice we want to apply. In the above example, we applied the after-returning advice. We defined this in our Aspect AdderAfterReturnAspect by executing the afterReturn method that we defined using the attribute method.

This advice within Aspect takes one parameter of type Object. The parameter gives us an opportunity to take an action before and/or after the target method call. In this case, we just log the method’s return value.

Spring AOP supports multiple types of advice using annotation-based config. This and more examples can be found here and here.

In this article, we illustrated the concepts used in AOP. We also looked at examples of using the AOP module of Spring. If we want to learn more about AOP, we can look at the following resources:

The implementation of these examples can be found over on GitHub.