SonarQube is an open-source and standalone service that gives an overview of the overall health of our source code by measuring code quality and code coverage.

In this tutorial, we'll cover the process of measuring code coverage using SonarQube and JaCoCo.

Code coverage, also called test coverage, is a measure of how much of the application’s code has been run in testing. Essentially, it's a metric that many teams use to check the quality of their tests because it represents the percentage of the production code that has been tested and run.

This gives development teams reassurance that their programs have been broadly tested for bugs and should be relatively error-free.

It also defines a quality gate, which is a set of measure-based boolean conditions. Additionally, SonarQube helps us to know whether our code is production-ready or not.

SonarQube is used in integration with JaCoCo, a free code coverage library for Java.

To start SonarQube, run the file named StartSonar.bat for a Windows machine or the file sonar.sh for Linux or macOS. The file is in the bin directory of the extracted download.

3.2. Set Properties for SonarQube and JaCoCo

The property sonar.jacoco.reportPath specifies the location where the JaCoCo report will be generated.

3.3. Dependencies and Plugins for JaCoCo

Now let's have a look at the dependency we'll add to our pom.xml file:

Next, let's configure the plugin that integrates our Maven project with JaCoCo:

Now that we've defined the required dependency and plugin in our pom.xml file, we'll run mvn clean install to build our project.

Then we'll start the SonarQube server before running the command mvn sonar:sonar.

Once this command runs successfully, it will give us a link to the dashboard of our project's code coverage report:

Notice that it creates a file named jacoco.exec in the target folder of the project.

This file is the result of the code coverage that will be further used by SonarQube: 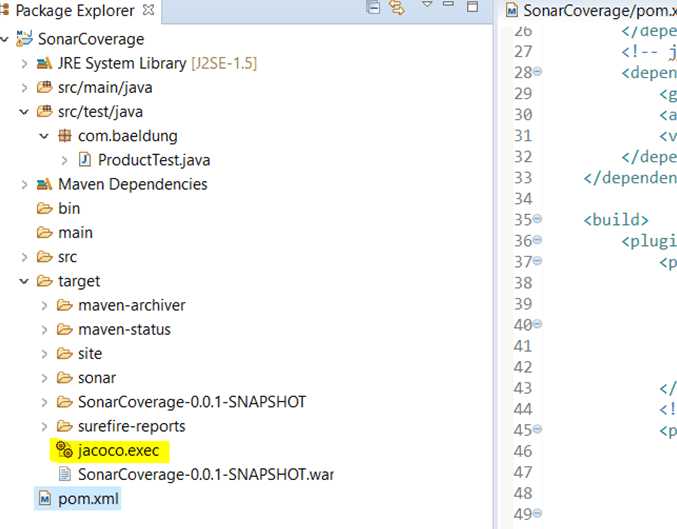 It also creates a dashboard in the SonarQube portal.

This dashboard shows the coverage report with all the issues, security vulnerabilities, maintainability metrics and code duplication blocks found in our code: 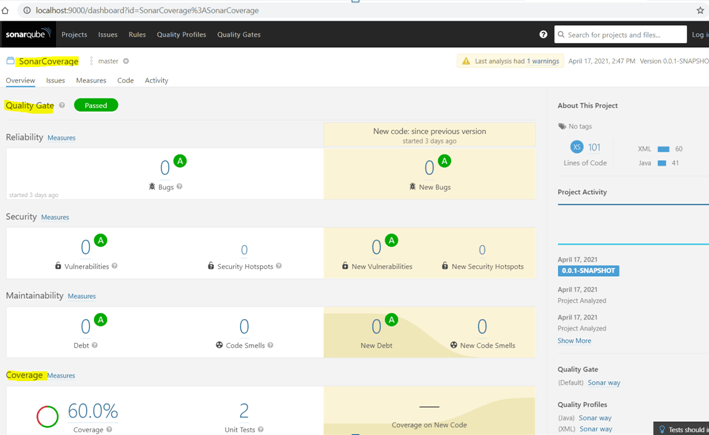 SonarQube and JaCoCo are two tools that we can use together to make it easy to measure code coverage.

They also provide an overview of the overall health of the source code by finding code duplications, bugs and other issues in the code. This helps us to know whether our code is production-ready or not.

The complete source code for the article is available over on GitHub.

Get the Quick Guide and
Take Advantage of JUnit 5
Download the E-book
Comments are closed on this article!
November Discount Launch 2022 – Banner 1