In this tutorial, we'll learn what non-blocking data structures are and why they are an important alternative to lock-based concurrent data structures.

Third, we'll look at the implementation of a lock-free queue in Java, and finally, we'll outline an approach on how to achieve wait-freedom.

First, let's look at the difference between a blocked and a starving thread.

In the above picture, Thread 2 acquires a lock on the data structure. When Thread 1 attempts to acquire a lock as well, it needs to wait until Thread 2 releases the lock; it won't proceed before it can get the lock. If we suspend Thread 2 while it holds the lock, Thread 1 will have to wait forever.

The next picture illustrates thread starvation:

The advantage of this approach is that we don't need a lock. However, what can happen is that if Thread 2 (or other threads) access the data structure with high frequency, then Thread 1 needs a large number of attempts until it finally succeeds. We call this starvation.

We can distinguish between three levels of non-blocking data structures.

Obstruction-freedom is the weakest form of a non-blocking data structure. Here, we only require that a thread is guaranteed to proceed if all other threads are suspended.

More precisely, a thread won't continue to starve if all other threads are suspended. This is different from using locks in that sense, that if the thread was waiting for a lock and a thread that holds the lock is suspended, the waiting thread would wait forever.

A data structure provides lock-freedom if, at any time, at least one thread can proceed. All other threads may be starving. The difference to obstruction-freedom is that there is at least one non-starving thread even if no threads are suspended.

A data structure is wait-free if it's lock-free and every thread is guaranteed to proceed after a finite number of steps, that is, threads will not starve for an “unreasonably large” number of steps.

The first part of the image shows obstruction-freedom as Thread 1 (top thread) can proceed (green arrow) as soon we suspend the other threads (at the bottom in yellow).

The middle part shows lock-freedom. At least Thread 1 can progress while others may be starving (red arrow).

The last part shows wait-freedom. Here, we guarantee that Thread 1 can continue (green arrow) after a certain period of starvation (red arrows).

In this section, we'll look at three basic operations that help us to build lock-free operations on data structures.

One of the basic operations used to avoid locking is the compare-and-swap (CAS) operation.

The idea of compare-and-swap is, that a variable is only updated if it still has the same value as at the time we had fetched the value of the variable from the main memory. CAS is an atomic operation, which means that fetch and update together are one single operation: 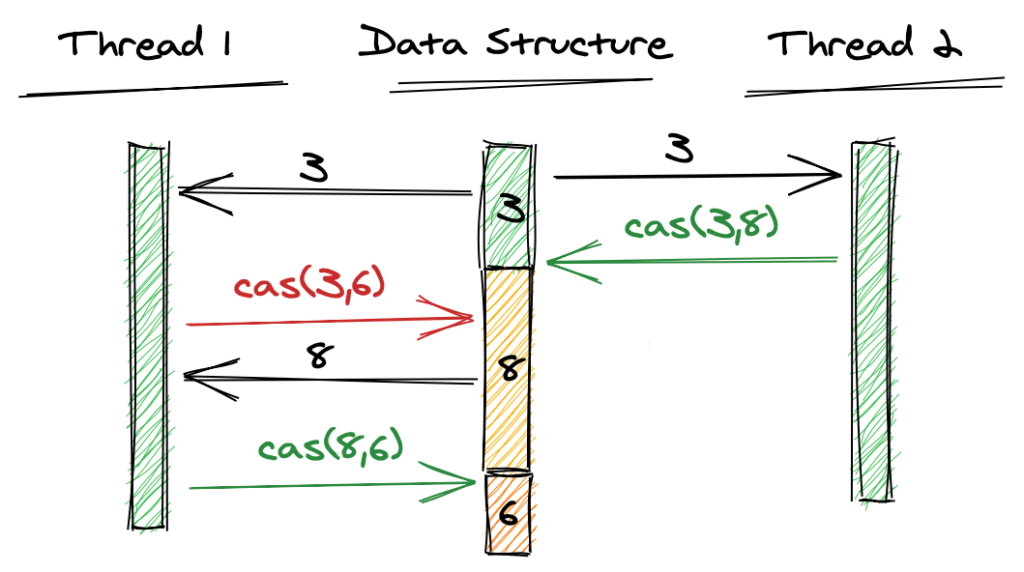 Here, both threads fetch the value 3 from the main memory. Thread 2 succeeds (green) and updates the variable to 8. As the first CAS by thread 1 expects the value to be still 3, the CAS fails (red). Therefore, Thread 1 fetches the value again, and the second CAS succeeds.

The important thing here is that CAS does not acquire a lock on the data structure but returns true if the update was successful, otherwise it returns false.

We only update the value with the new value if it still has the expected value, otherwise, it returns false. The following code snippet shows how CAS can be called:

We attempt to update our value until the CAS operation succeeds, that is, returns true.

However, it's possible that a thread gets stuck in starvation. That can happen if other threads perform a CAS on the same variable at the same time, so the operation will never succeed for a particular thread (or will take an unreasonable amount of time to succeed). Still, if the compare-and-swap fails, we know that another thread has succeeded, thus we also ensure global progress, as required for lock-freedom.

It's important to note that the hardware should support compare-and-swap, to make it a truly atomic operation without the use of locking.

Java provides an implementation of compare-and-swap in the class sun.misc.Unsafe. However, in most cases, we should not use this class directly, but Atomic variables instead.

Furthermore, compare-and-swap does not prevent the A-B-A problem. We'll look at that in the following section.

However, CAS also succeeds if the value had changed, and, in the meantime, has changed back to its previous value.

The below image illustrates this situation: 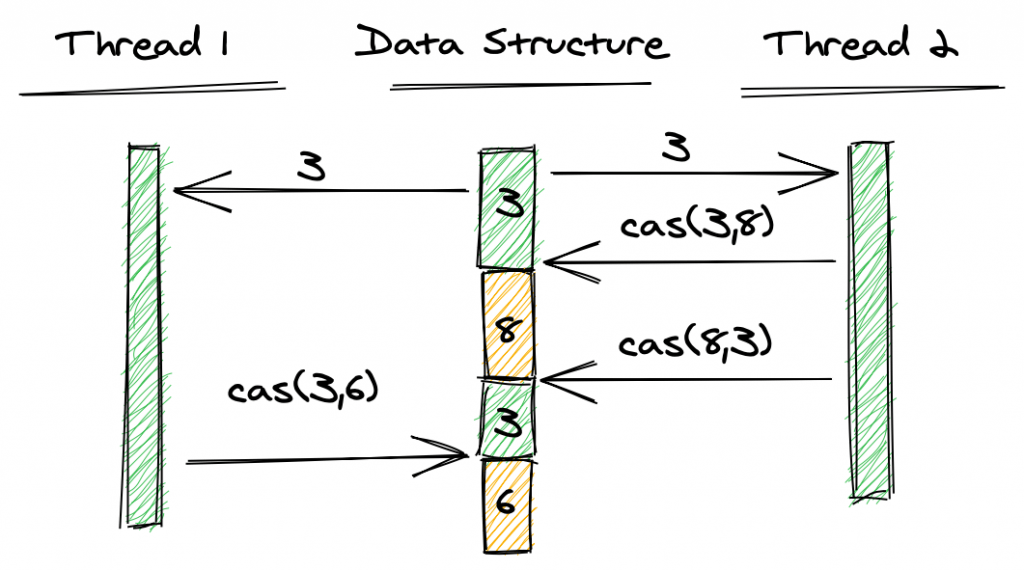 This is called the A-B-A problem. This behavior might not be a problem depending on the use-case, of course. However, it might not be desired for others. Java provides an implementation of load-link/store-conditional with the AtomicStampedReference class.

Another alternative is fetch-and-add. This operation increments the variable in the main memory by a given value. Again, the important point is that the operation happens atomically, which means no other thread can interfere.

To better understand the problem of two (or more) threads accessing a queue simultaneously, let's look at a linked queue and two threads trying to add an element concurrently.

The queue we'll look at is a doubly-linked FIFO queue where we add new elements after the last element (L) and the variable tail points to that last element: 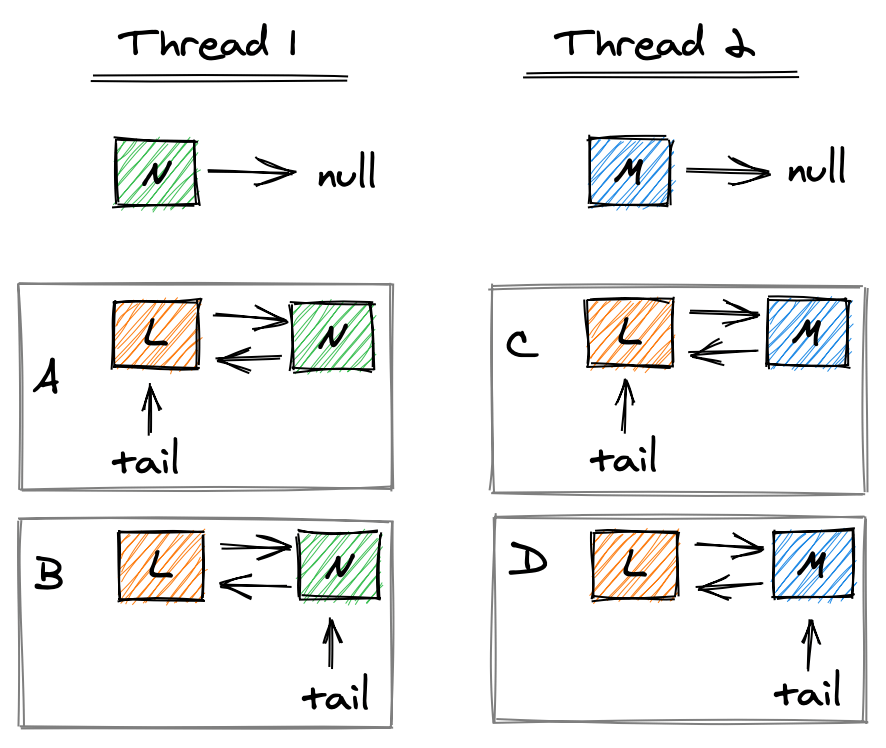 What can go wrong if the two threads perform these steps simultaneously? If the steps in the above picture execute in the order ABCD or ACBD, L, as well as tail, will point to M. N will remain disconnected from the queue.

If the steps execute in the order ACDB, tail will point to N, while L will point to M, which will cause an inconsistency in the queue:

Of course, one way to solve this problem is to have one thread acquire a lock on the queue. The solution we'll look at in the following chapter will solve the problem with the help of a lock-free operation by using the CAS operation we've seen earlier.

6. A Non-Blocking Queue in Java

Let's look at a basic lock-free queue in Java. First, let's look at the class members and the constructor:

The important part is the declaration of the head and tail references as AtomicReferences, which ensures that any update on these references is an atomic operation. This data type in Java implements the necessary compare-and-swap operation.

Next, let's look at the implementation of the Node class:

Here, the important part is to declare the references to the previous and next node as volatile. This ensures that we update these references always in the main memory (thus are directly visible to all threads). The same for the actual node value.

Our lock-free add operation will make sure that we add the new element at the tail and won't be disconnected from the queue, even if multiple threads want to add a new element concurrently:

The essential part to pay attention to is the highlighted line. We attempt to add the new node to the queue until the CAS operation succeeds to update the tail, which must still be the same tail to which we appended the new node.

Similar to the add-operation, the lock-free get-operation will make sure that we return the last element and move the tail to the current position:

Again, the essential part to pay attention to is the highlighted line. The CAS operation ensures that we move the current head only if no other node has been removed in the meantime.

As we've seen, the above implementation is lock-free, however, not wait-free. The while loops in both the add and get method can potentially loop for a long time (or, though unlikely, forever) if there are many threads accessing our queue.

A wait-free queue requires that every thread makes guaranteed progress (after a finite number of steps). In other words, the while loops in our add and get methods must succeed after a certain number of steps.

In order to achieve that, we assign a helper thread to every thread. If that helper thread succeeds to add an element to the queue, it will help the other thread to insert its element before inserting another element.

Of course, things become more complicated when we can add or remove threads dynamically.

In this article, we saw the fundamentals of non-blocking data structures. We explained the different levels and basic operations like compare-and-swap.

Then, we looked at a basic implementation of a lock-free queue in Java. Finally, we outlined the idea of how to achieve wait-freedom.

The full source code for all examples in this article is available over on GitHub.