In this tutorial, we’ll learn about an ELF file and its structure. We’ll also use readelf to check the structure of an ELF.

ELF is short for Executable and Linkable Format. It’s a format used for storing binaries, libraries, and core dumps on disks in Linux and Unix-based systems.

Moreover, the ELF format is versatile. Its design allows it to be executed on various processor types. This is a significant reason why the format is common compared to other executable file formats.

Generally, we write most programs in high-level languages such as C or C++. These programs cannot be directly executed on the CPU because the CPU doesn’t understand these instructions. Instead, we use a compiler that compiles the high-level language into object code. Using a linker, we also link the object code with shared libraries to get a binary file.

As a result, the binary file has instructions that the CPU can understand and execute. The binary file can adopt any format that defines the structure it should follow. However, the most common of these structures is the ELF format.

3. The Structure of the ELF File

The ELF file is divided into two parts. The first part is the ELF header, while the second is the file data.

Particularly, the ELF header is always available in the ELF file, while the Section header table is important during link time to create an executable. On the other hand, the Program header table is useful during runtime to help load the executable into memory.

Next, let’s look at the ELF file structure: 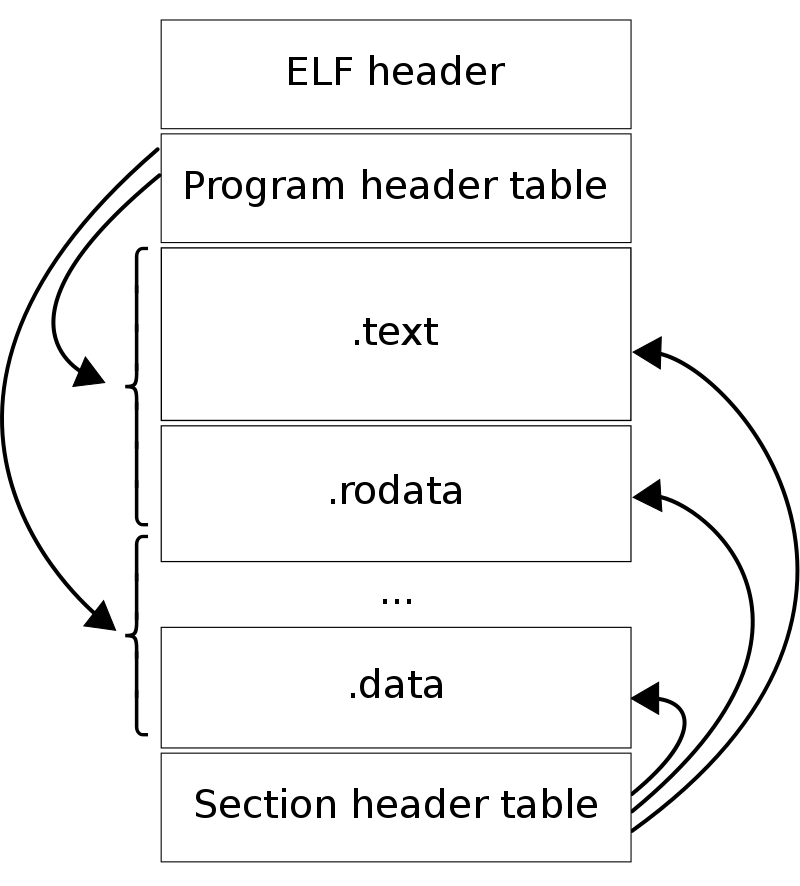 For instance, we see the different parts of the ELF file. We set the parts that begin with a dot for the system, while the rest are for applications.

In addition, let’s look at the different parts of the file in more detail.

Firstly, the ELF header is found at the start of the file. It contains metadata about the file.

For example, some of the metadata found in the ELF header includes information about whether the ELF file is 32-bit or 64-bit, whether it’s using little-endian or big-endian, the ELF version, and the architecture that the file requires.

In particular, the metadata in the ELF header helps different processor architectures to interpret the ELF file.

We use the readelf command with the -h option to show the ELF header of an ELF file. In our case, we are reading the ls binary file:

At this time, let’s have a closer look at what the fields in the ELF header structure represent:

Another part is the Program Header Table. The program header table stores information about segments. Each segment is made up of one or more sections. The kernel uses this information at run time. It tells the kernel how to create the process and map the segments into memory.

To run a program, the kernel loads the ELF header and the program header table into memory. Secondly, it loads the contents that are specified in LOAD in the program header table into memory, and it also checks if the interpreter is needed. Finally, the control is given to the executable itself or the interpreter if it’s available.

We use the readelf command with the -l option to display the program headers of an ELF file:

Program headers are essential when running the executable because they tell the operating system all it needs to know to put the executable into memory and run it.

The section header stores information about sections. This information is used during dynamic link time, just before the program is executed.

A linker links the binary file with shared libraries that it needs by loading them into memory. The linker’s implementation is specific to the operating system.

Additionally, the section header table contains information that’s used by other files to find the symbolic definitions and references of the program.

We use the readelf command with the -S option to display the information in the section header of a file:

As we discussed earlier, section headers are significant at link time to link the executable with the libraries it needs to run successfully.

This section holds the instructions that the program needs for it to run.

.rodata stands for read-only data. As such, these sections contain the actual, initialized data, which the program will need in memory. The memory reserves more space for the data segment than specified in the ELF file to make room for uninitialized variables.

In this article, we learned about the ELF file and its structure. We also looked at using readelf to check different parts of an ELF file.