In this tutorial, we’ll see how to monitor a directory recursively and execute a command whenever the files and directories within it change.

This capability helps to update directory views automatically, reload configuration files, log changes, back up, synchronize, and so on. It is an essential feature for complex utilities such as antiviruses, file managers, Dropbox-like applications, automatic IDEs checks, and many other tools.

The polling technique involves checking a specific resource at regular intervals. It’s usually the least efficient and most expensive way to perform an action when an event occurs, so we don’t recommend it.

Most operating systems have a file change notification mechanism that is a lot more efficient, responsive, and lightweight, such as inotify on Linux, FSEvents and kqueue on macOS, kqueue on FreeBSD/BSD, ReadDirectoryChangesW on Windows, etc.

However, the Linux inotify interface has some limitations:

For these reasons, we sometimes need to resort to polling. Let’s look at it in detail.

We can describe our polling algorithm with this flow chart: 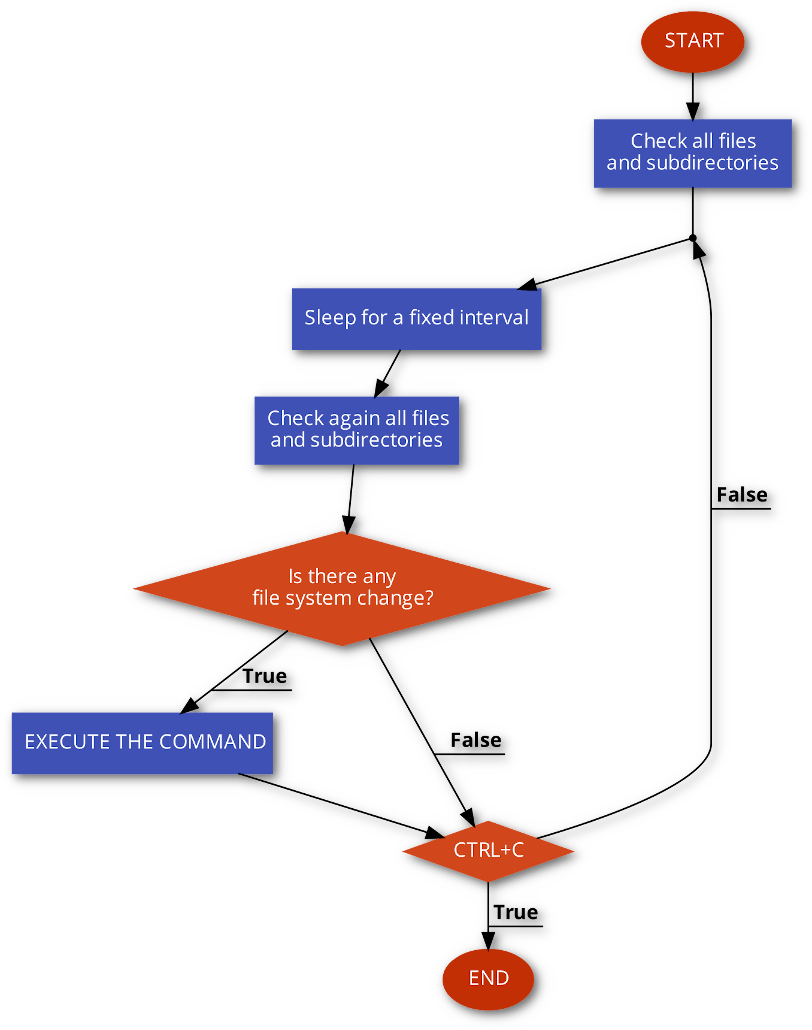 However, there are two pitfalls we should be aware of:

With this algorithm, the smaller the sleep interval, the closer (temporally) the command execution is to a file or directory change. Ideally, if the sleep were not there, command execution would be instantaneous. However, the smaller the interval, the greater the CPU and disk utilization. If the interval were not there, CPU and disk would be continuously used, causing overheating, wear, and system performance degradation.

For these reasons, we use a one-second sleep only as an example in the remainder of this tutorial. In practice, we have to choose the most appropriate interval depending on the circumstances.

In this section, we will see how to use the watch, ls, and sha256sum commands to detect a single file system change by polling.

watch runs user-defined commands at regular intervals. For example, we can repeatedly execute date by specifying the interval in seconds after the -n flag:

To exploit watch to detect a file system change, we need a hash that uniquely identifies the contents of the current directory. The trick is piping the output of ls as input to sha256sum:

Using the previous options, ls lists information about all files and subdirectories in the current directory:

So even a small change, such as saving a file without alternating its contents, will produce a different output of ls and, consequently, a hash change.

We can have issues when the ls output is very long. That’s why, to avoid the unexpected, we prefer to compare the fixed-length hashes produced by sha256sum.

Putting watch, ls, and sha256sum together, we can generate a hash every second:

Now let’s add the –chgexit flag, which terminates watch when the hash changes. Moreover, let’s use the Bash logical “AND” operator (&&) to execute the desired command (for instance, a simple echo) when watch is terminated by –chgexit:

Within a second, when a change occurs in the monitored folder, the message “Detected the modification of a file or directory” is logged.

The code in the previous section is not yet inside a loop, so it terminates after the first detected change. Therefore, we insert an infinite loop. We also need to set a trap for CTRL+C to properly exit that infinite loop.

It would also be nice to specify the command to execute and the directory to monitor as input parameters. So, our final script, which implements the flow chart from earlier:

Let’s try it after saving it as test.sh:

It works as expected, running our echo command after every change.

3. Bash Script Based on inotify

In most cases, inotify is the most efficient and reasonable solution to keep track of the file changes under the directories on watch. It was merged into the Linux kernel mainline in 2005, so it’s a standard in all Linux distributions.

inotify has some limitations, as we saw earlier. The main issue is that it requires the kernel to be aware of all relevant filesystem events, which is not always possible for NFS, shared directories, and so on.

3.1. Bash Script Based on inotify

Let’s look at our script right away:

We’ll not go into an explanation of every single line of our script. Here’s a breakdown of the important parts:

Let’s save our script as inotifyTest.sh in the directory to be monitored, then open two terminals. We will use the former to see how our script behaves and the latter to perform operations within the monitored directory.

Let’s start the script in the first terminal. In this case, the command to be executed is a simple echo:

Then let’s try some operations on files and directories in the second terminal:

Meanwhile, the first terminal logged all the operations correctly. Incidentally, we note that the last command rm -fR testDir actually did two operations:

So everything works as expected. However, we must pay attention to our actual use cases, as we’ll see in the next section.

Our script may detect many more events than we would like. For instance, let’s open a pre-existing text file test.txt with xed, make a change, and save it. We would expect one event, but, instead, our script detects four:

This unexpected behavior is due to the use of temporary files that we are generally not aware of. The same problem is present with other widely used terminal editors, such as nano.

Basically, there are two approaches to fixing the issue. The first is to restrict the type of monitored events, namely those indicated by the –event flag. The second is to exclude irrelevant files or directories by using the –exclude or –excludei flag.

For example, let’s try the same test again with xed, but exclude all the hidden files and directories by adding –exclude ‘/\.’ to the inotifywait parameters. This flag accepts a POSIX extended regular expression, so we need to escape the dots. Here’s the result:

Of the four events previously detected, this time, our script monitored only the last one. That’s what we wanted. In general, we need to analyze our use cases to find the most appropriate exclude regexes.

Let’s try tail -f on any old file to verify if our OS exceeded the inotify maximum watch limit:

The internal implementation of tail -f uses the inotify mechanism to monitor file changes. If all is well, it will show the last ten lines and pause; then, let’s abort with CTRL+C. Instead, if we’ve run out of our inotify watches, we’ll most likely get this error:

sysctl helps us to check the current config:

Let’s see what these values mean:

Usually, we should modify max_user_instances and max_user_watches and keep max_queued_events as the default. It’s safe to raise these values, but each used inotify watch takes up 1 kB on 64-bit systems of kernel memory, which is unswappable.

To modify the configuration permanently, let’s edit /etc/sysctl.conf with root permissions (on Debian/RedHat derivatives), modifying the following lines or adding them if they don’t exist. Let’s remember to replace n with the wanted number (the maximum is 524288):

Then let’s reload the sysctl settings with sysctl -p (on Debian/RedHat derivatives).

In this article, we saw how to run a command whenever a file or directory changes.

The two basic approaches are polling and inotify, each with pros and cons. We’ve analyzed two complete scripts that implement both strategies, which we can customize according to our needs.