In some special circumstances, we don't have a third-party build tool installed, such as Ant or Maven. And, we still need to compile a project with lots of packages and classes.

In this tutorial, we're going to use the javac command to accomplish this task with different scenarios.

Let's assume we have two directories in the current directory: src and out. The src directory holds our Java source files, and the out directory will contain the corresponding compiled class files. 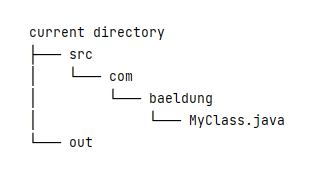 Then, let's use javac to compile the MyClass.java file into the out directory:

In the above command, the -d option specifies the destination directory for the class file. Also, we should note that the exact code of the MyClass.java file isn't that important, and we only need to ensure it's a grammar-correct Java file.

To be a little complicated, let's add another three Java files – YourClass.java, HerClass.java, and HisClass.java: 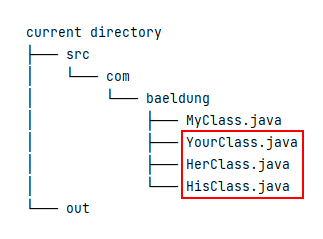 To compile all four of the above Java files, we can list each of them on the command line:

Then, let's add a new Main.java file that refers to the other four Java files, for example, by invoking methods or creating an object instance: 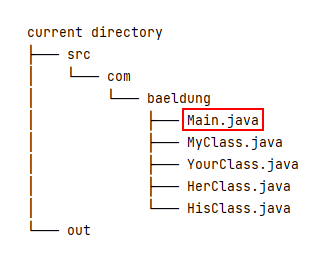 In this case, we only need to compile the Main.java file:

However, this approach has its limitations: the javac command only compiles the required types and omits other source files. For example, if we add a new ItsClass.java and the Main.java doesn't refer to it, then ItsClass.java will not be compiled:

To summarize, there are two scenarios suitable to list filenames in the javac command line: when there are just a few Java source files, and when there is a launcher class that refers to other classes recursively.

For example, we can use the wildcard to compile the above source files: 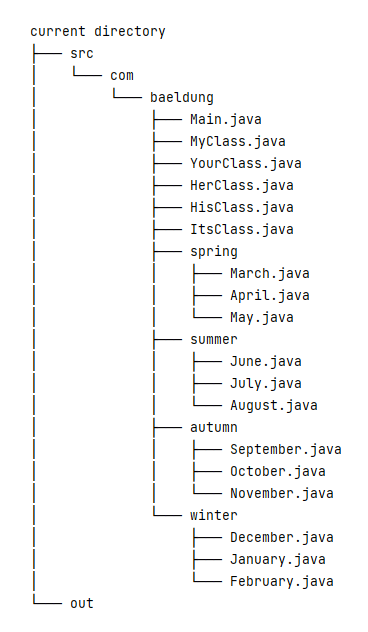 Now, in the command line, we can list each package with a wildcard to compile all of them:

When there are only a few packages, regardless of the source file number, it's suitable to use this wildcard approach.

But how can we generate such a @sources.txt file? That depends on the OS we're using. In Linux or macOS, we can use the find command:

In the above command line, the ./src/ is our search starting-point directory, the -type f option filters only regular files, and the -name “*.java” option matches all filenames with the .java extension.

However, in Windows, we can use the dir command:

In the above command line, the src folder is our search path, the /b switch shows the directory and file names without additional information, and the /s option lists all files in a specified directory and all subdirectories.

The shortcoming of this approach is that each time we add a new or remove an existing Java source file, we need to regenerate the sources.txt file.

Besides the above common approaches, there also exist other OS-dependent approaches, such as using globstar or pipe.

However, this option is disabled by default. And, we can use the shopt (sh + opt, shell options) command to inspect the Bash option settings. If we execute the shopt command without any argument, it will output a long list of options and their statuses (on or off).

Currently, we're only concerned with the globstar option:

To enable it, we use the shopt command with the -s option:

To disable it, we invoke the shopt command with the -u option:

After enabling this option, we can invoke javac with the double wildcard:

Conceptually, a pipe is a connection between two processes. And, we can utilize this pipe mechanism to connect multiple commands to produce our desired results.

To compile our Java source files, we can combine the find, xargs, and javac commands:

The above command line may run a bit slowly. That's because the javac command will run for each matched file. For more information, we can use the man find command to read the -exec option's documentation.

To be a little faster, we can change the semicolon (;) into a plus sign (+). Then, the javac command will collect all the matched files and execute only once: