While the volatile keyword in Java usually ensures thread safety, it's not always the case.

In this tutorial, we'll look at the scenario when a shared volatile variable can lead to a race condition.

2. What Is a volatile Variable?

Let's see how to declare a volatile variable:

In this section, we'll look at some important features of volatile variables.

Suppose we have two threads, running on different CPUs, accessing a shared, non-volatile variable. Let's further suppose that the first thread is writing to a variable while the second thread is reading the same variable.

Each thread copies the value of the variable from the main memory into its respective CPU cache for performance reasons.

In the case of non-volatile variables, the JVM does not guarantee when the value will be written back to the main memory from the cache.

If the updated value from the first thread is not immediately flushed back to the main memory, there's a possibility that the second thread may end up reading the older value.

The diagram below depicts the above scenario: 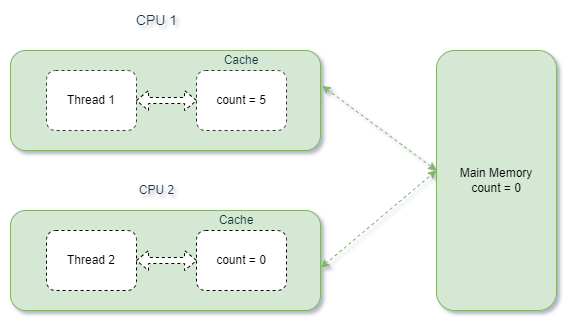 Here, the first thread has updated the value of the variable count to 5. But, the flushing back of the updated value to the main memory does not happen instantly. Therefore, the second thread reads the older value. This can lead to wrong results in a multi-threaded environment.

On the other hand, if we declare count as volatile, each thread sees its latest updated value in the main memory without any delay.

This is called the visibility guarantee of the volatile keyword. It helps in avoiding the above data inconsistency issue.

The JVM and the CPU sometimes reorder independent instructions and execute them in parallel to improve performance.

For example, let's look at two instructions that are independent and can run simultaneously:

However, some instructions can't execute in parallel because a latter instruction depends on the result of a prior instruction:

In addition, reordering of independent instructions can also take place. This can cause incorrect behavior in a multi-threaded application.

Therefore, the first thread should execute the instructions in the following order:

But, let's suppose the CPU reorders the instructions as:

However, if we declare flag as volatile, the above instruction reordering would not have happened.

Applying the volatile keyword on a variable prevents instruction reordering by providing the happens-before guarantee.

4. When Does the volatile Keyword Provide Thread Safety?

The volatile keyword is useful in two multi-threading scenarios:

5. When Does volatile Not Provide Thread Safety?

The volatile keyword is a lightweight synchronization mechanism.

Unlike synchronized methods or blocks, it does not make other threads wait while one thread is working on a critical section. Therefore, the volatile keyword does not provide thread safety when non-atomic operations or composite operations are performed on shared variables.

Operations like increment and decrement are composite operations. These operations internally involve three steps: reading the value of the variable, updating it, and then, writing the updated value back to memory.

The short time gap in between reading the value and writing the new value back to the memory can create a race condition. Other threads working on the same variable may read and operate on the older value during that time gap.

Moreover, if multiple threads are performing non-atomic operations on the same shared variable, they may overwrite each other's results.

Thus, in such situations where threads need to first read the value of the shared variable to figure out the next value, declaring the variable as volatile will not work.

Now, we'll try to understand the above scenario when declaring a variable as volatile is not thread-safe with the help of an example.

For this, we'll declare a shared volatile variable named count and initialize it to zero. We'll also define a method to increment this variable:

Next, we'll create two threads t1 and t2. These threads call the above increment operation a thousand times:

From the above program, we may expect that the final value of the count variable will be 2000. However, every time we execute the program, the result will be different. Sometimes, it will print the “correct” value (2000), and sometimes it won't.

Let's look at two different outputs that we got when we ran the sample program:

The above unpredictable behavior is because both the threads are performing the increment operation on the shared count variable. As mentioned earlier, the increment operation is not atomic. It performs three operations – read, update, and then write the new value of the variable to the main memory. Thus, there's a high chance that interleaving of these operations will occur when both t1 and t2 are running simultaneously.

In this article, we saw that declaring a shared variable as volatile will not always be thread-safe.

We learned that to provide thread safety and avoid race conditions for non-atomic operations, using synchronized methods or blocks or atomic variables are both viable solutions.

As usual, the complete source code of the above example is available over on GitHub.