In Java, Strings are immutable. An obvious question that is quite prevalent in interviews is “Why Strings are designed as immutable in Java?”

James Gosling, the creator of Java, was once asked in an interview when should one use immutables, to which he answers:

I would use an immutable whenever I can.

He further supports his argument stating features that immutability provides, such as caching, security, easy reuse without replication, etc.

In this tutorial, we'll further explore why the Java language designers decided to keep String immutable.

2. What Is an Immutable Object?

An immutable object is an object whose internal state remains constant after it has been entirely created. This means that once the object has been assigned to a variable, we can neither update the reference nor mutate the internal state by any means.

We have a separate article that discusses immutable objects in detail. For more information, read the Immutable Objects in Java article.

3. Why Is String Immutable in Java?

The key benefits of keeping this class as immutable are caching, security, synchronization, and performance.

Let's discuss how these things work.

The String is the most widely used data structure. Caching the String literals and reusing them saves a lot of heap space because different String variables refer to the same object in the String pool. String intern pool serves exactly this purpose.

Java String Pool is the special memory region where Strings are stored by the JVM. Since Strings are immutable in Java, the JVM optimizes the amount of memory allocated for them by storing only one copy of each literal String in the pool. This process is called interning:

Because of the presence of the String pool in the preceding example, two different variables are pointing to same String object from the pool, thus saving crucial memory resource. 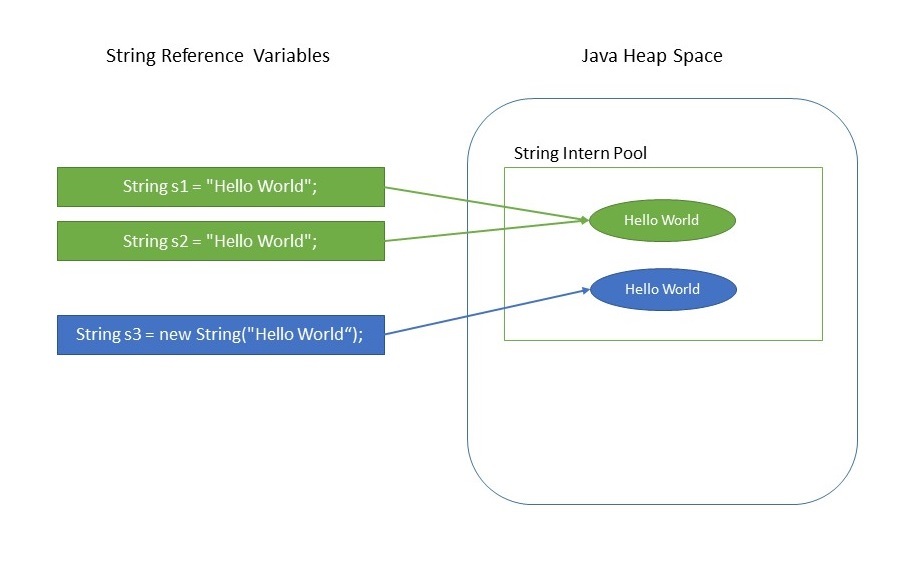 We have a separate article dedicated to Java String Pool. For more information, head on over to that article.

Hence securing String class is crucial regarding the security of the whole application in general. For example, consider this simple code snippet:

In the above code snippet, let's say that we received a String object from an untrustworthy source. We're doing all necessary security checks initially to check if the String is only alphanumeric, followed by some more operations.

Remember that our unreliable source caller method still has reference to this userName object.

If Strings were mutable, then by the time we execute the update, we can't be sure that the String we received, even after performing security checks, would be safe. The untrustworthy caller method still has the reference and can change the String between integrity checks. Thus making our query prone to SQL injections in this case. So mutable Strings could lead to degradation of security over time.

It could also happen that the String userName is visible to another thread, which could then change its value after the integrity check.

In general, immutability comes to our rescue in this case because it's easier to operate with sensitive code when values don't change because there are fewer interleavings of operations that might affect the result.

Being immutable automatically makes the String thread safe since they won't be changed when accessed from multiple threads.

Hence immutable objects, in general, can be shared across multiple threads running simultaneously. They're also thread-safe because if a thread changes the value, then instead of modifying the same, a new String would be created in the String pool. Hence, Strings are safe for multi-threading.

Since String objects are abundantly used as a data structure, they are also widely used in hash implementations like HashMap, HashTable, HashSet, etc. When operating upon these hash implementations, hashCode() method is called quite frequently for bucketing.

The immutability guarantees Strings that their value won’t change. So the hashCode() method is overridden in String class to facilitate caching, such that the hash is calculated and cached during the first hashCode() call and the same value is returned ever since.

This, in turn, improves the performance of collections that uses hash implementations when operated with String objects.

On the other hand, mutable Strings would produce two different hashcodes at the time of insertion and retrieval if contents of String was modified after the operation, potentially losing the value object in the Map.

As we saw previously, String pool exists because Strings are immutable. In turn, it enhances the performance by saving heap memory and faster access of hash implementations when operated with Strings.

Through this article, we can conclude that Strings are immutable precisely so that their references can be treated as a normal variable and one can pass them around, between methods and across threads, without worrying about whether the actual String object it's pointing to will change.

We also learned as what might be the other reasons that prompted the Java language designers to make this class as immutable.