Static methods are common to most object-oriented programming languages, including Java. What differentiates static from instance methods is that they have no object that owns them. Instead, static methods are defined on the class level and can be used without creating instances.

Finally, we'll see how to test static methods and how to mock them.

A static method in Java is a part of the class definition. We can define a static method by adding the static keyword to a method:

To access static methods, we use the class name followed by a dot and the name of the method:

We should note that this static method has access to the static state of the StaticCounter class. Often static methods are stateless, but they can work with class-level data as part of various techniques, including the singleton pattern.

Although it's also possible to reference static methods using objects, this antipattern is often flagged as an error by tools such as Sonar.

As static methods don't operate on instance members, there are a few limitations we should be aware of:

Each of the above results in a compile-time error. We should also note that if we declare a static method with the same name in a subclass, it doesn't override but instead hides the base class method.

Let's now have a look at common use cases when it makes sense to apply static methods in our Java code.

Using static methods makes sense when we are developing methods with standard behavior that operates on their input arguments.

The String operations from Apache StringUtils are a great example of this:

Another good example is the Collections class, as it contains common methods that operate on different collections:

A valid reason for using static methods is when we reuse standard behavior across instances of different classes.

For example, we commonly use Java Collections and Apache StringUtils in our domain and business classes: 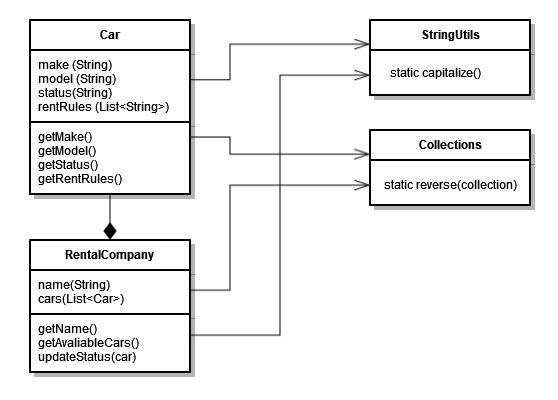 As these functions don't have a state of their own and are not bound to a particular part of our business logic, it makes sense to hold them in a module where they can be shared.

Since static methods cannot reference instance member variables, they are a good choice for methods that don't require any object state manipulation.

When we use static methods for operations where the state is not managed, then method calling is more practical. The caller can call the method directly without having to create instances.

When we share state by all instances of the class, like in the case of a static counter, then methods that operate on that state should be static. Managing a global state can be a source of errors, so Sonar will report a critical issue when instance methods write directly to static fields.

A function is called pure if its return value depends only on the input parameters passed. Pure functions get all the data from their parameters and compute something from that data.

Pure functions do not operate on any instance or static variables. Therefore, executing a pure function should also have no side effects.

As static methods do not allow overriding and referencing instance variables, they are a great choice for implementing pure functions in Java.

Since Java doesn't have a specific type set aside for housing a set of functions, we often create a utility class. Utility classes provide a home for pure static functions. Instead of writing the same logic over and over, we can group together pure functions which we reuse throughout the project.

A utility class in Java is a stateless class that we should never instantiate. Therefore, it's recommended to declare it final, so it cannot be subclassed (which wouldn't add value). Also, in order to prevent anyone from trying to instantiate it, we can add a private constructor:

We should note that all methods we put in the utility class should be static.

Let's check how we can unit test and mock static methods in Java.

Unit testing of well-designed, pure static methods with JUnit is quite simple. We can use the class name to call our static method and pass some test parameters to it.

Our unit under test will compute the result from its input parameters. Therefore, we can make assertions on the result and test for different input-output combinations:

If we must, then we can mock static functions using Mockito. However, we will need to add an additional mockito-inline dependency to our pom.xml:

Now, we can use the Mockito.mockStatic method to mock invocations to static method calls:

Also, we explored when it makes sense to use static methods in our code. We saw that static methods are a good choice for pure functions with standard behavior that are getting reused across instances but not changing their state. Finally, we looked at how to test and mock static methods.

As always, the complete source code is available over on GitHub.