In this quick tutorial, we'll show how to use RabbitMQ's APIs related to two core concepts: Connections and Channels.

RabbitMQ is a popular implementation of the AMQP (Advanced Messaging Queue Protocol), widely used by companies of all sizes to handle their messaging needs.

From an application point of view, we're usually concerned with AMQP's main entities: Virtual Hosts, Exchanges, and Queues. As we've already covered those concepts in earlier articles, here, we'll focus on the details of two less-discussed concepts: Connections and Channels.

The first step a client must take to interact with a RabbitMQ broker is to establish a Connection. AMPQ is an application-level protocol, so this connection happens on top of a transport-level one. This can be a regular TCP connection or an encrypted one using TLS. The main role of a Connection is to provide a secure conduit through which a client can interact with a broker.

This means that during connection establishment, a client must supply valid credentials to the server. A server may support different credential types, including regular username/password, SASL, X.509 password, or any supported mechanism.

Besides security, the connection establishment phase is also responsible for negotiating some aspects of the AMPQ protocol. At this point, if the client and/or server cannot agree on the protocol version or a tuning parameter value, the connection won't be established, and the transport level connection will be closed.

When using Java, the standard way to communicate with a RabbitMQ browser is to use the amqp-client Java library. We can add this library to our project using adding the corresponding Maven dependency:

The latest version of this artifact is available on Maven Central.

This library uses the Factory pattern to create new connections. First, we create a new ConnectionFactory instance and set all parameters needed to create connections. At a minimum, this requires informing the address of the RabbitMQ host:

Once we're done setting those parameters, we use the newConnection() factory method to create a new Connection instance:

Simply put, an AMQP channel is a mechanism that allows multiplexing multiple logic flows on top of a single connection. This allows better resource usage both on the client and server side since setting up a connection is a relatively expensive operation.

A client creates one or more channels so it can send commands to the broker. This includes commands related to sending and/or receiving messages.

Channels also provide some additional guarantees regarding the protocol logic:

A key aspect of a channel is that its lifecycle is bound to the connection used to create it. This means that if we close a connection, all associated channels will also be closed.

Java applications using the amqp-client library create a new Channel from an existing Connection using the createChannel() method from the former:

Once we have a Channel, we can send commands to the server. For instance, to create a queue, we use the queueDeclare() method:

This code “declares” a queue, which is AMQP's way of saying “create if not already existing”. The additional arguments after the queue name define its additional characteristics:

Now, to post a message to this queue using the default exchange, we use the basicPublish() method:

This code sends a message to the default exchange using the queue name as its routing key.

Let's consider a scenario where we use messaging systems: CQRS (Command Query Responsibility Segregation) applications. In a nutshell, CQRS-based applications have two independent paths: commands and queries. Commands can change data but never return values. Queries, on the other hand, return values but never modify them.

Since the command path never returns any data, the service can execute them asynchronously. In a typical implementation, we have an HTTP POST endpoint that internally builds a message and sends it to a queue for later processing.

Now, for a service that must handle dozens or even hundreds of concurrent requests, opening connections and channels every time is not a realistic option. Instead, a better approach is to use a channel pool.

Of course, this leads to the next problem: should we create a single connection and create channels from it or use multiple connections?

In this strategy, we'll use a single connection and just create a channel pool with a capacity equal to the maximum number of concurrent connections the service can manage. For a traditional thread-per-request model, this should be set to the same size as the request handler thread pool.

The downside of this strategy is that, under heavier loads, the fact that we must send commands one at a time through the associated channel implies that we must use a synchronization mechanism. This, in turn, adds extra latency in the command path, which we want to minimize.

Another option is to go to the other extreme and use a Connection pool, so there's never contention for a channel. For each Connection, we'll create a single Channel that a handler thread will use to issue commands to the server.

However, the fact that we remove synchronization from the client side comes with a cost. The broker must allocate additional resources for each connection, such as socket descriptors and state information. Moreover, the server must split the available throughput between clients.

To evaluate those candidate strategies, let's run a simple benchmark for each one. The benchmark consists of running multiple workers in parallel that send one thousand messages of 4 Kbytes each. Upon construction, the worker receives a Connection from which it will create a Channel to send commands. It also receives the number of iterations, payload size, and a CountDownLatch used to inform the test runner that it has finished sending messages:

Besides indicating that it has finished its job by decrementing the latch, the worker also returns a WorkerResult instance with the elapsed time to send all messages. Although here we just have a long value, we can use extend it to return more details.

The controller creates the connection factory and workers according to the strategy being evaluated. For the single connection, it creates the Connection instance and passes it to every worker:

For the multiple connections strategy, we create a new Connection for each worker:

The throughput function calculates the benchmark measure will be the total time needed to complete all workers, divided by the number of workers:

Notice that we need to multiply the numerator by 1000 so we get the throughput in messages by second.

These are the results of our benchmark for both strategies. For each worker count, we've run the benchmark 10 times and used the average value as the throughput measure for tar particular worker/strategy. The environment itself is modest by today's standards: 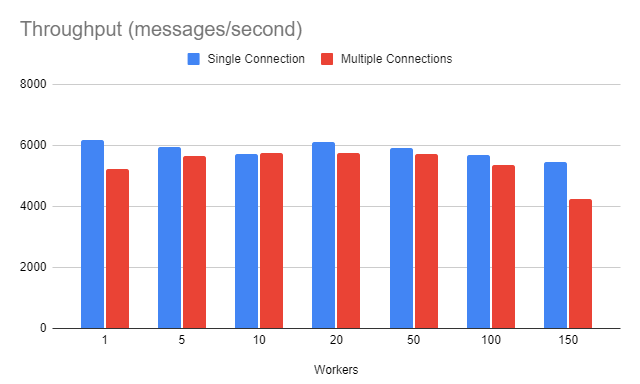 For this specific environment, we see a slight advantage in the single connection strategy. This advantage seems to increase for the 150 workers scenario.

Given the benchmark results, we cannot point to a clear winner. For worker counts between 5 and 100, the results are more or less the same. After that, the overhead associated with multiple connections seems to be higher than handling multiple channels on a single connection.

Also, we must consider that the test workers do only one thing: send fixed messages to a queue. Real-world applications, like the CQRS one we've mentioned, usually do some extra work before and/or after sending a message. So, to select the best strategy, the recommended way is to run your own benchmark using a configuration that is as close as possible to the production environment.

In this article, we've explored the concepts of Channels and Connections in RabbitMQ and how we can use them in different ways. As usual, the full code is available over on GitHub.