The two most prevalent modes of passing arguments to methods are “passing-by-value” and “passing-by-reference”. Different programming languages use these concepts in different ways. As far as Java is concerned, everything is strictly Pass-by-Value.

In this tutorial, we're going to illustrate how Java passes arguments for various types.

Let's start with some of the different mechanisms for passing parameters to functions:

The two most common mechanisms in modern programming languages are “Pass-by-Value” and “Pass-by-Reference”. Before we proceed, let's discuss these first:

When a parameter is pass-by-value, the caller and the callee method operate on two different variables which are copies of each other. Any changes to one variable don't modify the other.

When a parameter is pass-by-reference, the caller and the callee operate on the same object.

It means that when a variable is pass-by-reference, the unique identifier of the object is sent to the method. Any changes to the parameter’s instance members will result in that change being made to the original value.

The fundamental concepts in any programming language are “values” and “references”. In Java, Primitive variables store the actual values, whereas Non-Primitives store the reference variables which point to the addresses of the objects they're referring to. Both values and references are stored in the stack memory.

Arguments in Java are always passed-by-value. During method invocation, a copy of each argument, whether its a value or reference, is created in stack memory which is then passed to the method.

Let's now see this in action with the help of some code examples.

The lifespan of these formal parameters lasts only as long as that method is running, and upon returning, these formal arguments are cleared away from the stack and are discarded.

Let's try to understand it with the help of a code example:

Let's try to understand the assertions in the above program by analyzing how these values are stored in memory:

In Java, all objects are dynamically stored in Heap space under the hood. These objects are referred from references called reference variables.

A Java object, in contrast to Primitives, is stored in two stages. The reference variables are stored in stack memory and the object that they're referring to, are stored in a Heap memory.

Let's try to comprehend this with the help of a code example:

Let's analyze the assertions in the above program. We have passed objects a and b in modify() method that has the same value 1. Initially, these object references are pointing to two distinct object locations in a heap space: 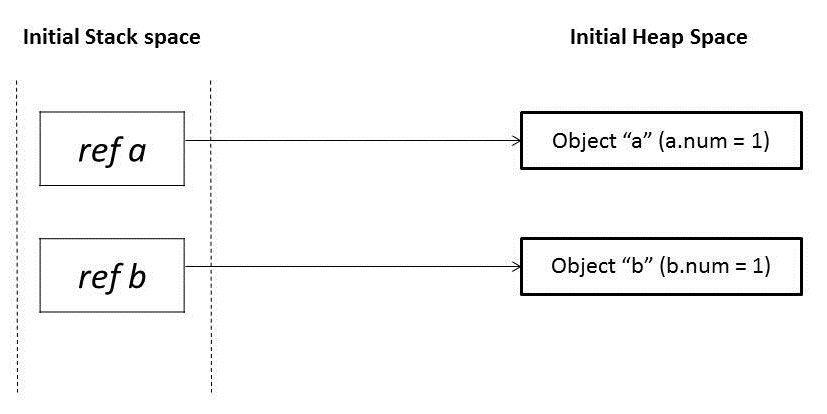 When these references a and b are passed in the modify() method, it creates mirror copies of those references a1 and b1 which point to the same old objects: 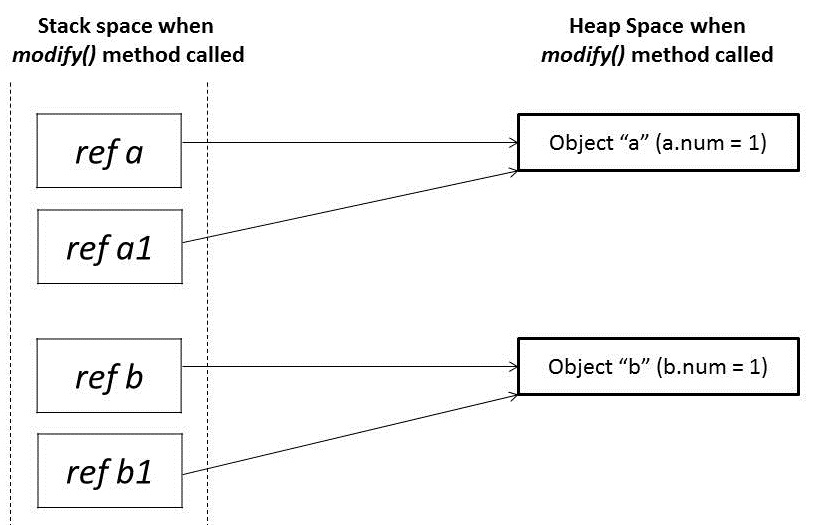 In the modify() method, when we modify reference a1, it changes the original object. However, for a reference b1, we have assigned a new object. So it's now pointing to a new object in heap memory.

Any change made to b1 will not reflect anything in the original object: 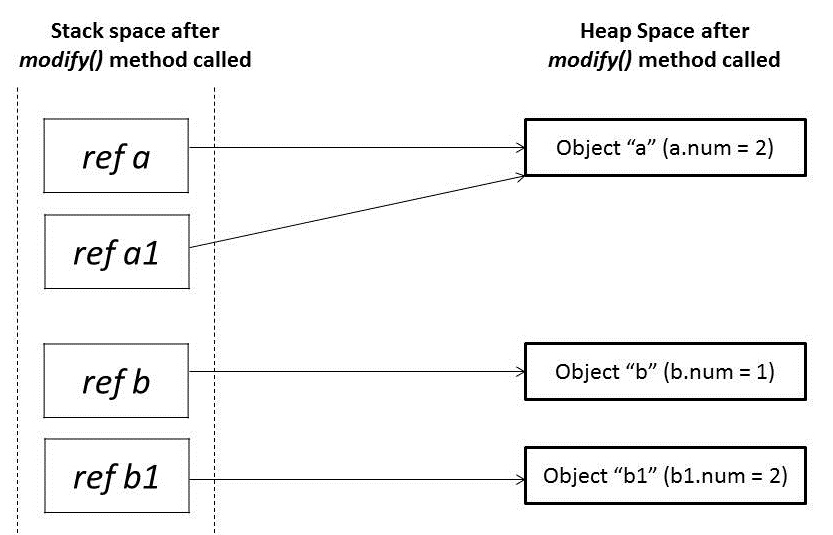 In this article, we looked at how parameter passing is handled in case of Primitives and Non-Primitives.

We learned that parameter passing in Java is always Pass-by-Value. However, the context changes depending upon whether we're dealing with Primitives or Objects:

The code snippets used in this article can be found over on GitHub.