Before discussing interrupts, let's review multithreading. Multithreading is a process of executing two or more threads simultaneously. A Java application starts with a single thread – called the main thread – associated with the main() method. This main thread can then start other threads.

Threads are lightweight, which means that they run in the same memory space. Hence, they can easily communicate among themselves. Let's take a look at the life cycle of a thread: 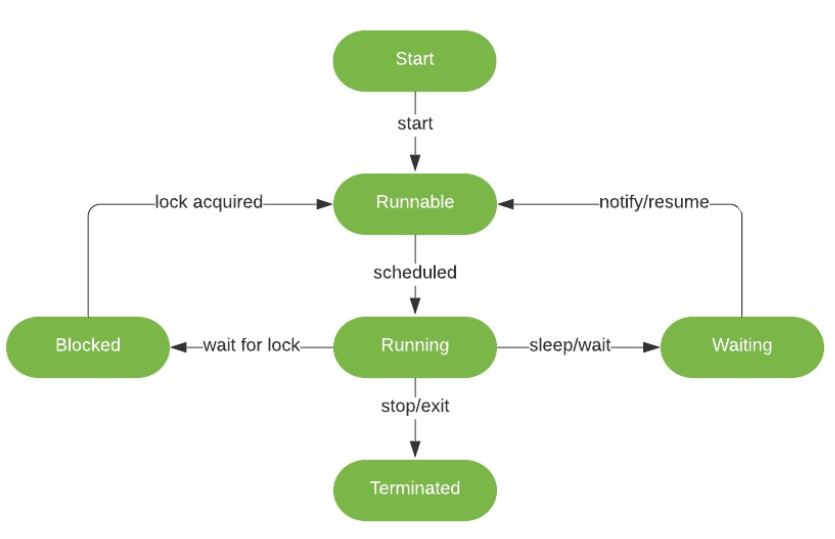 As soon as we create a new thread, it’s in the NEW state. It remains in this state until the program starts the thread using the start() method.

Calling the start() method on a thread puts it in the RUNNABLE state. Threads in this state are either running or ready to run.

When a thread is waiting for a monitor lock and is trying to access code that is locked by some other thread, it enters the BLOCKED state.

A thread can be put in the WAITING state by various events, such as a call to the wait() method. In this state, a thread is waiting for a signal from another thread.

When a thread either finishes execution or terminates abnormally, it'll wind up in the TERMINATED state. Threads can be interrupted, and when a thread is interrupted, it will throw InterruptedException.

In the next sections, we'll see InterruptedException in detail and learn how to respond to it.

3. What Is an InterruptedException?

An InterruptedException is thrown when a thread is interrupted while it's waiting, sleeping, or otherwise occupied. In other words, some code has called the interrupt() method on our thread. It's a checked exception, and many blocking operations in Java can throw it.

The purpose of the interrupt system is to provide a well-defined framework for allowing threads to interrupt tasks (potentially time-consuming ones) in other threads.  A good way to think about interruption is that it doesn't actually interrupt a running thread — it just requests that the thread interrupt itself at the next convenient opportunity.

Threads may block for several reasons: waiting to wake up from a Thread.sleep(), waiting to acquire a lock, waiting for I/O completion, or waiting for the result of a computation in another thread, among others.

The InterruptedException is usually thrown by all blocking methods so that it can be handled and the corrective action can be performed. There are several methods in Java that throw InterruptedException. These include Thread.sleep(), Thread.join(), the wait() method of the Object class, and put() and take() methods of BlockingQueue, to name a few.

Let's have a quick look at some key methods of the Thread class for dealing with interrupts:

To respond to interrupt requests, we must handle InterruptedException. We'll see how to do just that in the next section.

4. How to Handle an InterruptedException

It's important to note that thread scheduling is JVM-dependent. This is natural, as JVM is a virtual machine and requires the native operating system resources to support multithreading. Hence, we can't guarantee that our thread will never be interrupted.

An interrupt is an indication to a thread that it should stop what it's doing and do something else. More specifically, if we're writing some code that will be executed by an Executor or some other thread management mechanism, we need to make sure that our code responds promptly to interrupts. Otherwise, our application may lead to a deadlock.

There are few practical strategies for handling InterruptedException. Let's take a look at them.

We can allow the InterruptedException to propagate up the call stack, for example, by adding a throws clause to each method in turn and letting the caller determine how to handle the interrupt. This can involve our not catching the exception or catching and rethrowing it. Let's try to achieve this in an example:

Here, we are checking whether the thread is interrupted and if so, we throw an InterruptedException. Now, let's call the propagateException() method:

When we try to run this piece of code, we'll receive an InterruptedException with the stack trace:

Although this is the most sensible way to respond to the exception, sometimes we can't throw it — for instance, when our code is a part of a Runnable. In this situation, we must catch it and restore the status. We'll see how to handle this scenario in the next section.

There are some cases where we can't propagate InterruptedException. For example, suppose our task is defined by a Runnable or overriding a method that doesn't throw any checked exceptions. In such cases, we can preserve the interruption. The standard way to do this is to restore the interrupted status.

We can call the interrupt() method again (it will set the flag back to true) so that the code higher up the call stack can see that an interrupt was issued. For example, let's interrupt a thread and try to access its interrupted status:

And here's the run() method that handles this interrupt and restores the interrupted status:

Although Java exceptions cover all the exceptional cases and conditions, we might want to throw a specific custom exception unique to the code and business logic. Here, we can create our custom exception to handle the interrupt. We'll see it in the next section.

Custom exceptions provide the flexibility to add attributes and methods that are not part of a standard Java exception. Hence, it's perfectly valid to handle the interrupt in a custom way, depending on the circumstances.

We can complete additional work to allow the application to handle the interrupt request gracefully. For instance, when a thread is sleeping or waiting on an I/O operation, and it receives the interrupt, we can close any resources before terminating the thread.

We can throw our CustomInterruptedException when the thread is interrupted:

Let's also see how we can check whether the exception is thrown with the correct message:

Similarly, we can handle the exception and restore the interrupted status:

We can test the code by checking the interrupted status to make sure it returns true:

In this tutorial, we saw different ways to handle the InterruptedException. If we handle it correctly, we can balance the responsiveness and robustness of the application. And, as always, the code snippets used here are available over on GitHub.