In this tutorial, we'll understand the Generic Security Service API (GSS API) and how we can implement it in Java. We'll see how we can secure network communication using the GSS API in Java.

In the process, we'll create simple client and server components, securing them with GSS API.

Security mechanisms like Kerberos, NTLM, and Digest-MD5 are quite different in their capabilities and implementations. Typically, an application supporting one of these mechanisms finds it quite daunting to switch to another.

This is where a generic framework like GSS API provides applications with an abstraction. Therefore applications using GSS API can negotiate a suitable security mechanism and use that for communication. All that without actually having to implement any mechanism-specific details.

GSS API is a token-based mechanism. It works by the exchange of security tokens between peers. This exchange typically happens over a network but GSS API is agnostic to those details.

These tokens are generated and processed by the specific implementations of the GSS API. The syntax and semantics of these tokens are specific to the security mechanism negotiated between the peers: 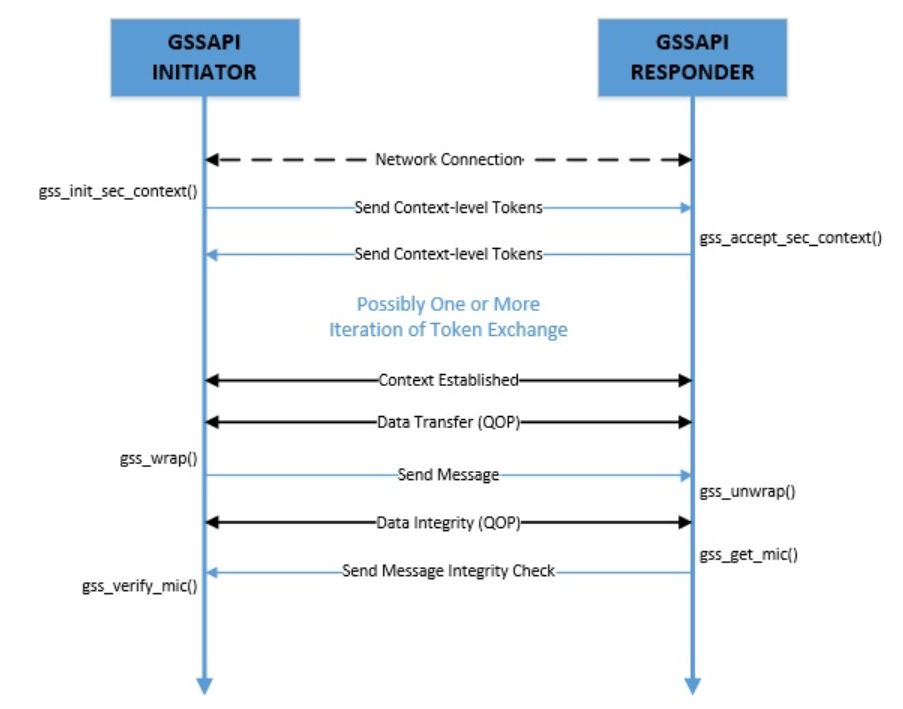 Once successfully established at both the ends, we can use the security context to exchange data securely. This may include data integrity checks and data encryption, depending upon the underlying security mechanism.

Java supports GSS API as part of the package “org.ietf.jgss”. The package name may seem peculiar. That's because the Java bindings for GSS API are defined in an IETF specification. The specification itself is independent of the security mechanism.

One of the popular security mechanism for Java GSS is Kerberos v5.

Let's try to understand some of the core APIs that builds Java GSS:

Apart from the above interfaces, there are few other important classes to note:

While the Java GSS defines the core framework for implementing the GSS API in Java, it does not provide an implementation. Java adopts Provider-based pluggable implementations for security services including Java GSS.

There is a default GSS provider that ships with the JDK. However, there are other vendor-specific GSS providers with different security mechanisms which we can use. One such provider is IBM Java GSS. We have to register such a security provider with JCA to be able to use them.

Moreover, if required, we can implement our own security provider with possibly custom security mechanisms. However, this is hardly needed in practice.

4. GSS API Through an Example

Now, we'll see Java GSS in action through an example. We'll create a simple client and server application. The client is more commonly referred to as initiator and server as an acceptor in GSS. We'll use Java GSS and Kerberos v5 underneath for authentication.

4.1. GSS Context for Client and Server

To begin with, we'll have to establish a GSSContext, both at the server and client-side of the application.

Let's first see how we can do this at the client-side:

There is quite a lot of things happening here, let's break them down:

Similarly, we have to define the server-side context:

As we can see, this is much simpler than the client-side context. The only difference here is that we need acceptor's credentials which we have used as null. As before, null means that the default credentials will be used.

Although we have created the server and client-side GSSContext, please note that they are unestablished at this stage.

To establish these contexts, we need to exchange tokens specific to the security mechanism specified, that is Kerberos v5:

This finally makes the context established at both the ends:

Now, that we have context established at both the ends, we can start sending data with integrity and confidentiality:

There are a couple of things happening here, let's analyze:

Hence, the client and server are able to exchange data with integrity and confidentiality.

4.4. Kerberos Set-up for the Example

Now, a GSS mechanism like Kerberos is typically expected to fetch credentials from an existing Subject. The class Subject here is a JAAS abstraction representing an entity like a person or a service. This is usually populated during a JAAS-based authentication.

However, for our example, we'll not directly use a JAAS-based authentication. We'll let Kerberos obtain credentials directly, in our case using a keytab file. There is a JVM system parameter to achieve that:

However, the defaults Kerberos implementation provided by Sun Microsystem relies on JAAS to provide authentication.

This configuration is straight-forward, where we have defined Kerberos as the required login module for both initiator and acceptor. Additionally, we have configured to use the respective principals from a keytab file. We can pass this JAAS configuration to JVM as a system parameter:

Here, the assumption is that we have access to a Kerberos KDC. In the KDC we have set up the required principals and obtained the keytab file to use, let's say “example.keytab”.

Additionally, we need the Kerberos configuration file pointing to the right KDC:

This simple configuration defines a KDC running on port 52135 with a default realm as EXAMPLE.COM. We can pass this to JVM as a system parameter:

To run the example, we have to make use of the Kerberos artifacts discussed in the last section.

Also, we need to pass the required JVM parameters:

This is sufficient for Kerberos to perform the authentication with credentials from keytab and GSS to establish the contexts.

While GSS API promises to solve a host of security problems through pluggable mechanisms, there are few use cases which have been more widely adopted:

GSS API is quite effective in providing security services to applications in a pluggable manner. However, it's not the only choice to achieve this in Java.

Let's understand what else Java has to offer and how do they compare against GSS API:

Overall, GSS API is pretty powerful in providing security services in mechanism agnostic manner. However, support for more security mechanisms in Java will take this further in adoption.

To sum up, in this tutorial, we understood the basics of GSS API as a security framework. We went through the Java API for GSS and understood how we can leverage them. In the process, we created simple client and server components that performed mutual authentication and exchanged data securely.

Further, we also saw what are the practical applications of GSS API and what are the alternatives available in Java.

As always, the code can be found over on GitHub.

Learn the basics of securing a REST API with Spring
Get access to the video lesson
2 Comments
Oldest
Newest
Inline Feedbacks
View all comments
Comments are closed on this article!
res – Security (video) (cat=Security/Spring Security)