When a Java class is compiled, a class file with the same name is created. However, in the case of nested classes or nested interfaces, it creates a class file with a name combining the inner and outer class names, including a dollar sign.

In this article, we'll see all those scenarios.

We can use nested classes and interfaces to logically group entities that are only used in one place. This not only makes our code more readable and maintainable, but it also increases encapsulation.

In the next sections, we're going to discuss each of these in detail. We'll also take a look at enums.

First of all, let's create a simple Java class:

When we compile the Outer class, the compiler will create an Outer.class file.
In the next subsections, we'll add nested classes in the Outer class and see how class files are named.

Static nested classes can have both static and non-static fields and methods. They are tied to the outer class and not with a particular instance. Hence, we don’t need an instance of the outer class to access them.

Let's declare a static nested class within our Outer class:

When we compile our Outer class, the compiler creates two class files, one for Outer and another for StaticNested:

Non-static nested classes – also called inner classes – are associated with an instance of the enclosing class, and they can access all the variables and methods of the outer class.

Let's add one more nested class to our Outer class:

It generates one more class file:

Local classes, also called inner classes, are defined in a block — a group of statements between balanced braces. For example, they can be in a method body, a for loop, or an if clause. The scope of the local class is restricted within the block just like the local variables. Local classes, when compiled, appear as a dollar sign with an auto-generated number.

The class file generated for the local class uses a naming convention – OuterClassName$1LocalClassName.class

Let's declare a local class within a method:

The compiler creates a separate class file for our Local class:

Similarly, we can declare a local class within an if clause:

Although we're creating another local class with the same name, the compiler doesn't complain. It creates one more class file and names it with the number increased:

As the name suggests, anonymous classes are the inner classes with no name. The compiler uses an auto-generated number after a dollar sign to name the class file.

We need to declare and instantiate anonymous classes in a single expression at the same time. They usually extend an existing class or implement an interface.

Here, we've created an anonymous class by extending the Outer class, and the compiler added one more class file: 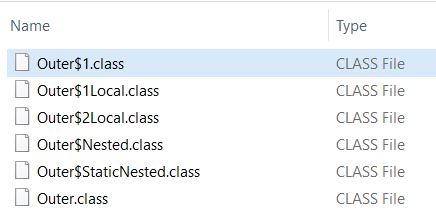 Similarly, we can implement an interface with an anonymous class. 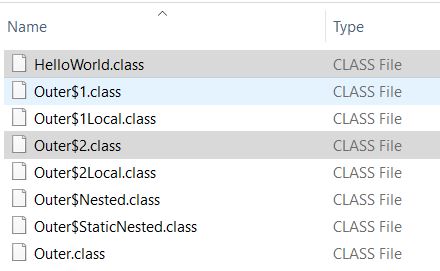 As we see, a class file is generated for the interface HelloWorld and another one for the anonymous class with the name Outer$2.

Let's declare an inner class inside our HelloWorld interface:

And the compiler generates one more class file: 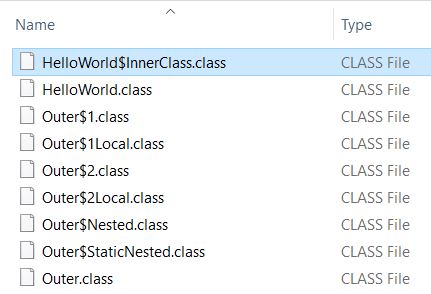 We can't directly access nested interfaces. They can only be accessed using the outer class or outer interface. For example, the Entry interface inside the Map interface is nested and can be accessed as Map.Entry.

4.1. Interface Inside an Interface

An interface declared inside the interface is implicitly public.

Let's declare our interface inside the HelloWorld interface:

This will create a new class file named HelloWorld$HelloSomeone for the nested interface.

4.2. Interface Inside a Class

Interfaces declared inside the class can take any access modifier.

Let's declare an interface inside our Outer class:

It will generate a new class file with the name: OuterClass$StaticNestedClass

The enum was introduced in Java 5. It's a data type that contains a fixed set of constants, and those constants are the instances of that enum.

The enum declaration defines a class called an enum type (also known as enumerated data type). We can add many things to the enum like a constructor, methods, variables, and something called a constant-specific class body.

When we create an enum, we're creating a new class, and we’re implicitly extending the Enum class. Enum cannot inherit any other class or can't be extended. However, it can implement an interface.

We can declare an enum as a standalone class, in its own source file, or another class member. Let's see all the ways to create an enum.

When it is compiled, the compiler will create a class file with the name Level for our enum.

Now, let's declare a nested enum in our Outer class:

The compiler will create a separate class file named Outer$Color for our nested enum.

5.3. Enum Within an Interface

Similarly, we can declare an enum within an interface:

When the HelloWorld interface is compiled, the compiler will add one more class file named HelloWorld$Directon.

We can declare an enum inside another enum:

Finally, let's take a look at the generated class files:

The compiler creates a separate class file for each of the enum types.

In this article, we saw different naming conventions used for Java class files. We added classes, interfaces, and enums inside a single Java file and observed how the compiler creates a separate class file for each of them.

As always, the code examples for this article are available over on GitHub.