In this tutorial, we’ll show how to use the Java's ArrayDeque class – which is an implementation of Deque interface.

An ArrayDeque (also known as an “Array Double Ended Queue”, pronounced as “ArrayDeck”) is a special kind of a growable array that allows us to add or remove an element from both sides.

For each operation, we basically have two options.

The first group consists of methods that throw exception if the operation fails. The other group returns a status or a value:

Let's look at a few simple example of how we can make use of the ArrayDeque.

3.1. Using ArrayDeque as a Stack

We'll start with an example of how we can treat the class as a Stack – and push an element:

Let’s also see how we can pop an element from the ArrayDeque – when used as a Stack:

The pop method throws NoSuchElementException when a stack is empty.

3.2. Using ArrayDeque as a Queue

Let’s now start with a simple example showing how we can offer an element in an ArrayDeque – when used as a simple Queue:

And let’s see how we can poll an element from an ArrayDeque, also when used as a Queue:

The poll method returns a null value if a queue is empty.

Under the hood, the ArrayDeque is backed by an array which doubles its size when it gets filled.

Initially, the array is initialized with a size of 16. It's implemented as a double-ended queue where it maintains two pointers namely a head and a tail.

Let's see this logic in action – at a high level. 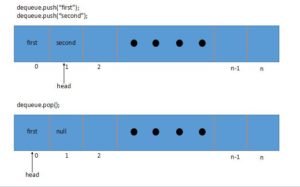 As can be seen, when a user adds in an element using the push method, it moves the head pointer by one.

When we pop an element, it sets the element at the head position as null so the element could be garbage collected, and then moves back the head pointer by one. 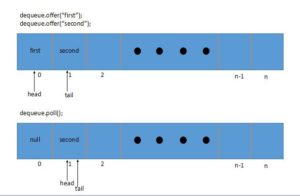 When we add in an element using the offer method, it moves the tail pointer by one.

While when user polls an element, it sets the element at the head position to null so the element could be garbage collected, and then moves the head pointer.

Finally, a few more notes worth understanding and remembering about this particular implementation:

In this short article, we illustrated the usage of methods in ArrayDeque.

The implementation of all these examples can be found in the GitHub project; this is a Maven-based project, so it should be easy to import and run as is.