In this article, we're going to have a look at setting up FindBugs on a Java project and integrating it into the IDE and the Maven build.

Note: FindBugs project is deprecated and SpotBugs is now actively maintained as its successor which works with the latest versions of Java.

In order to start generating static analysis reports, we first need to add the FindBugs plugin in our pom.xml:

You can check out the latest version of the plugin on Maven Central.

Now that we have the Maven plugin properly configured, let's generate the project documentation using the mvn site command.

The report will be generated in the folder target/site in the project directory under the name findbugs.html.

You can also run the mvn findbugs:gui command to launch the GUI interface to browse the generated reports for the current project.

The FindBugs plugin can also be configured to fail under some circumstances – by adding the execution goal check to our configuration:

The effort – when maxed out, performs a more complete and precise analysis, revealing more bugs in the code, though, it consumes more resources and takes more time to complete.

You can now run the command mvn verify, to check if the build will succeed or not – depending on the defects detected while running the analysis.

You can also enhance the report generation process and take more control over the analysis, by adding some basic configuration to the plugin declaration:

The onlyAnalyze option declares a comma separated values of classes/packages eligible for analysis.

The visitors/omitVisitors options are also comma separated values, they are used to specify which detectors should/shouldn't be run during the analysis – Note that visitors and omitVisitors cannot be used at the same time.

A detector is specified by its class name, without any package qualification. Find the details of all detectors class names available by following this link.

The IDE installation of the FindBugs Plugin is pretty straightforward – you just need to use the software update feature in Eclipse, with the following update site: http://findbugs.cs.umd.edu/eclipse.

To make sure that FindBugs is properly installed in your Eclipse environment, then, look for the option labeled FindBugs under Windows -> Preferences -> Java.

In order to launch a static analysis on a project using the FindBugs Eclipse plugin, you need to right-click the project in the package explorer, then, click on the option labeled find bugs.

After launch, Eclipse shows the results under the Bug Explorer window as shown in the screenshot below:

As of version 2, FindBugs started ranking bugs with a scale from 1 to 20 to measure the severity of defects:

While the bug rank describes severity, the confidence factor reflects the likelihood of these bugs to be flagged as real ones. The confidence was originally called priority, but it was renamed in the new version.

Of course, some defects can be open to interpretation, and they can even exist without causing any harm to the desired behavior of a software. That's why, in a real-world situation, we need to properly configure static analysis tools by choosing a limited set of defects to activate in a specific project.

FindBugs plugin makes it easy to customize the bugs analysis strategy, by offering various ways to filter warning and limit the strictness of the results. You can check the configuration interface by going to Window -> Preferences -> Java -> FindBugs: 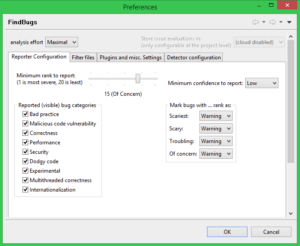 You can freely uncheck unwanted categories, raise the minimum rank to report, specify the minimum confidence to report, and customize markers for bugs ranks – Warning, Info, or Error.

FindBugs divide defects in many categories:

Under the Detector configuration tab, you can check the rules you're supposed to respect in your project: 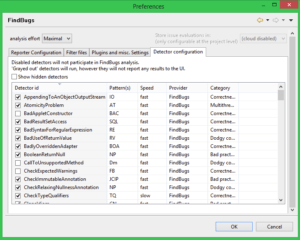 The speed attribute reflects how costly the analysis will be. The fastest the detector, the smallest the resources consumed to perform it.

You can find the exhaustive list of bugs recognized by FindBugs at the official documentation page.

Under the Filter files panel, you can create custom file filters, in order to include/exclude parts of the code-base. This feature is useful – for example – when you want to prevent “unmanaged” or “trash” code, defects to pop up in the reports, or may exclude all classes from the test package for instance.

If you are an IntelliJ IDEA fan, and you want to start inspecting Java code using FindBugs, you can simply grab the plugin installation package from the official JetBrains site, and extract it to the folder %INSTALLATION_DIRECTORY%/plugins. Restart your IDE and you're good to go.

Alternatively, you can navigate to Settings -> Plugins and search all repositories for FindBugs plugin.

By the time of writing this article, the version 1.0.1 of the IntelliJ IDEA plugin is just out,

To make sure that the FindBugs plugin is properly installed, check for the option labeled “Analyze project code” under Analyze -> FindBugs.

In order to launch static analysis in IDEA, click on “Analyze project code”, under Analyze -> FindBugs, then look for the FindBugs-IDEA panel to inspect the results:

You can use the second column of commands on the left side of the screenshot, to group defects using different factors:

It is also possible to export the reports in XML/HTML format, by clicking the “export” button in the fourth column of commands.

The FindBugs plugin preferences pages inside IDEA is pretty self-explanatory: 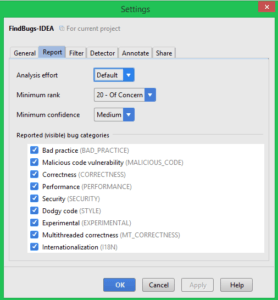 This settings window is quite similar to the one we've seen in Eclipse, thus you can perform all kinds of configuration in an analogous fashion, starting from analysis effort level, bugs ranking, confidence, classes filtering, etc.

The preferences panel can be accessed inside IDEA, by clicking the “Plugin preferences” icon under the FindBugs-IDEA panel.

5. Report Analysis for the Spring-Rest Project

In this section we're going to shed some light on a static analysis done on the spring-rest project available on Github as an example:

Most of the defects are minor — Of Concern, but let's see what we can do to fix some of them.

As you can probably guess, FindBugs is complaining about the fact that we're throwing away the return value of the createNewFile() method. A possible fix would be to store the returned value in a newly declared variable, then, log something meaningful using the DEBUG log level — e.g. “The named file does not exist and was successfully created” if the returned value is true.

The method may fail to close stream on exception: this particular defect illustrates a typical use case for exception handling that suggests to always close streams in a finally block:

When an exception is thrown before the stream.close() instruction, the stream is never closed, that's why it's always preferable to make use of the finally{} block to close streams opened during a try/catch routine.

An Exception is caught when Exception is not thrown: As you may already know, catching Exception is a bad coding practice, FindBugs thinks that you must catch a most specific exception, so you can handle it properly. So basically manipulating streams in a Java class, catching IOException would be more appropriate than catching a more generic Exception.

Field not initialized in the constructor but dereferenced without null check: it always a good idea to initialize fields inside constructors, otherwise, we should live with the possibility that the code will raise an NPE. Thus, it is recommended to perform null checks whenever we're not sure if the variable is properly initialized or not.

In this article, we've covered the basic key points to use and customize FindBugs in a Java project.

As you can see, FindBugs is a powerful, yet simple static analysis tool, it helps to detect potential quality holes in your system – if tuned and used correctly.

Finally, it is worth mentioning that FindBugs can also be run as part of a separate continuous automatic code review tool like Sputnik, which can be very helpful to give the reports a lot more visibility.

The sample code we used for static analysis is available over on Github.