A translation is a geometric transformation that shifts all points in a given direction and by the same distance. Alternatively, it can be interpreted as sliding the origin of the coordinate system by the same amount but in the opposite direction.

In the following example, image (b) was obtained from image (a) by shifting each pixel 150 pixels to the left:

In the following figure, we illustrated schematically the translation invariance of an image classifier, whose classifier function is denoted as 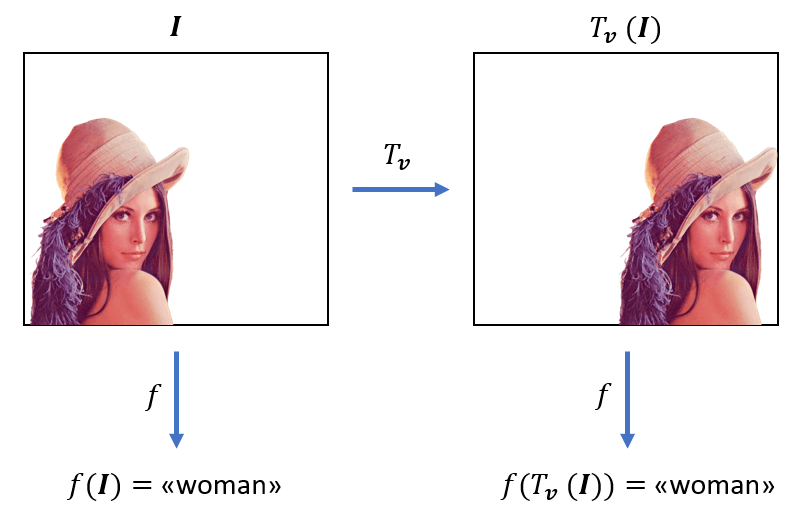 Translation equivariance is a property often confused with translation invariance. So let’s recall the mathematical definition of equivariance.

is said equivariant to a function

if and only if:

if the order of application does not change the result of the composite function.

For example, the convolution operation is translation equivariant. In fact, if we apply a translation

and then perform a convolution

will be the same as if we first performed convolution to

and then applied the same translation

The translation equivariance of the convolution operation is represented below: 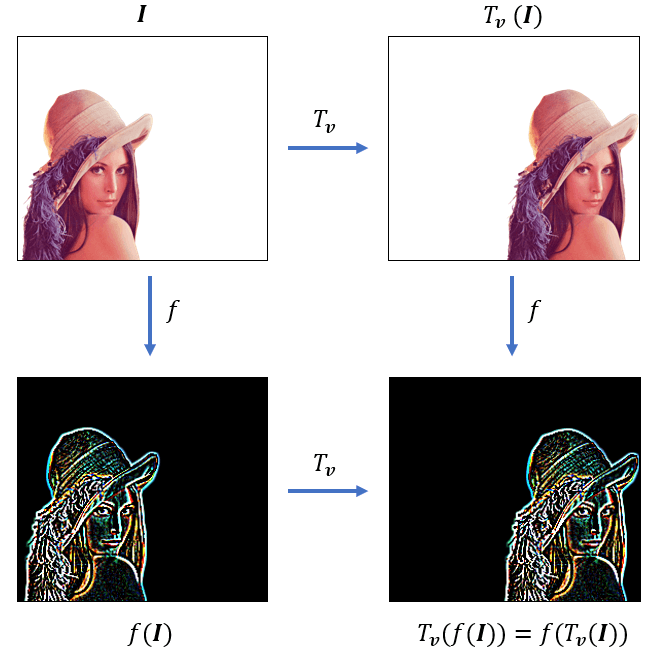 The translation equivariance is obtained by means of the convolutional layers. In fact, if the input image is translated to the right by a certain amount, the feature maps generated by convolutional layers are shifted by the same amount and direction.

CNNs designed for image classification are translation invariant since if we translate the input, then the output label will not be influenced. Translation invariance is obtained in CNNs by means of the pooling layers. The pooling operation is usually applied to the feature map generated by preceding convolutional layers and non-linear activation functions. Pooling is the substitution of features in a neighborhood with representative statistics, the max or the mean generally. Hence, the location of the original feature is disregarded.

CNNs are not naturally equivariant and invariant to rotation, scaling, and affine transformations. Hence, data augmentation techniques must be used to make CNNs more robust to such geometric transformations.

In this tutorial, we reviewed the concepts of translation invariance and translation equivariance, and we provided illustrative examples. Furthermore, we discussed the importance of both properties in the CNNs for image classification.