In this tutorial, we describe how to use the silhouette plot in cluster analysis.

Clustering is one of the unsupervised learning methods. First, we explain what silhouette values measure and how to calculate and interpret them. Then, we show how to determine the number of clusters using the mean silhouette value.

A silhouette plot is a graphical tool depicting how well our data points fit into the clusters they’ve been assigned to. We call it the quality of fit cohesion.

At the same time, a silhouette plot shows the quality of separation: this metric conveys the degree to which the points that don’t belong to the same cluster have been assigned to different ones.

To analyze clusters, we need to consider both criteria, which silhouette plots allow us to do.

A silhouette value is a combination of two scores: cohesion and separation.

Cohesion measures the similarity of the points in the same cluster. So, we can call it an intra-cluster metric.

be a cluster and

two points in it. Then, we can interpret the distance between them as a measure of their similarity. From there, we define the cohesion of point

as the mean distance between

and the other points

On the other hand, separation refers to the degree to which the clusters don’t overlap. So, it’s an inter-cluster metric.

Intuitively, the distance between the clusters speaks about the “goodness of their separation”. So, we define the separation of

as the minimum mean distance between

3.3. Combining Cohesion and Separation into a Silhouette Value

Then, the silhouette value of a point

3.4. How to Calculate the Silhouette Value?

Let’s take a look at clusters

in the following image: 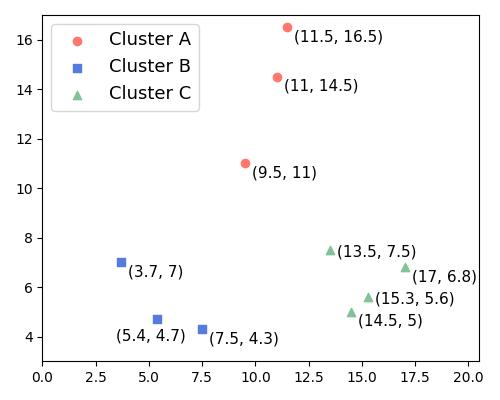 Let’s compute the silhouette value of the point

. To do so, we need to calculate its cohesion and separation scores.

The cohesion of point

is its mean distance to the other points in

. The distance between the point

and the distance to

So, the cohesion of point

We can compute the mean distance of the point

in the same way:

Following the same steps, we compute its mean distance to cluster

Therefore, the separation score of

, since that’s the lower of the two values.

From there, we get the silhouette value of

is close to the theoretically maximal silhouette value, we can be confident that we assigned

to the cluster it actually belongs to.

Let’s say that we have two clusters:

is the cluster closest to

. We’re calculating the silhouette values of the points in

of any point in

will be closer to 1 when

. In that case, the distance between

and the other points in

is much smaller than the distance to points in 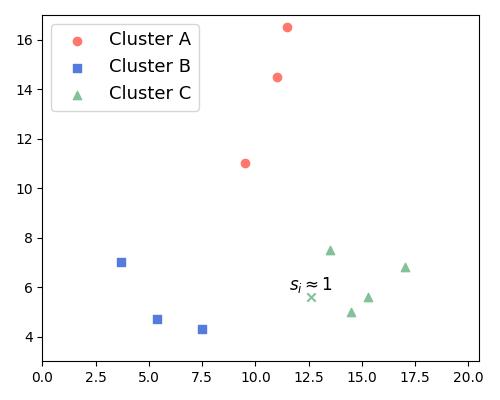 Therefore, as the average of the silhouette values of the points in a cluster gets closer to 1, the cohesion and separation of the cluster as a whole increase.

The converse is also true. When the silhouette value is closer to zero, both

are similar. Then, the distances between

and the elements on

are similar. Thus, it is not clear if 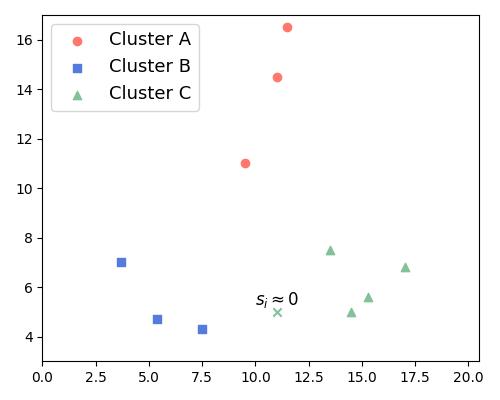 The worst case occurs when the silhouette value

is negative, which happens when

. Then, the point in question lies closer to

. So, it looks misclassified: 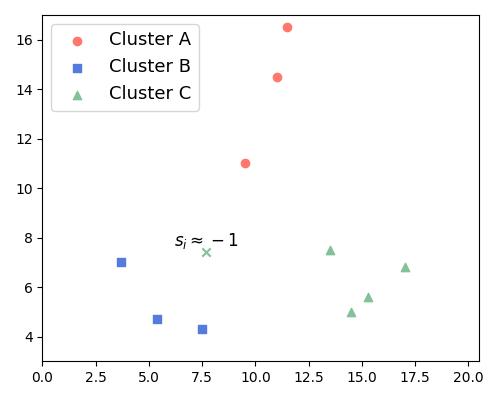 of all the points in it in the decreasing order. A silhouette plot shows the silhouettes of all the clusters in random order. Additionally, it inserts blank spaces between consecutive clusters and can color them differently.

For example, here’s a plot for four clusters we got with the K-Means clustering algorithm on an ad-hoc two-dimensional dataset: 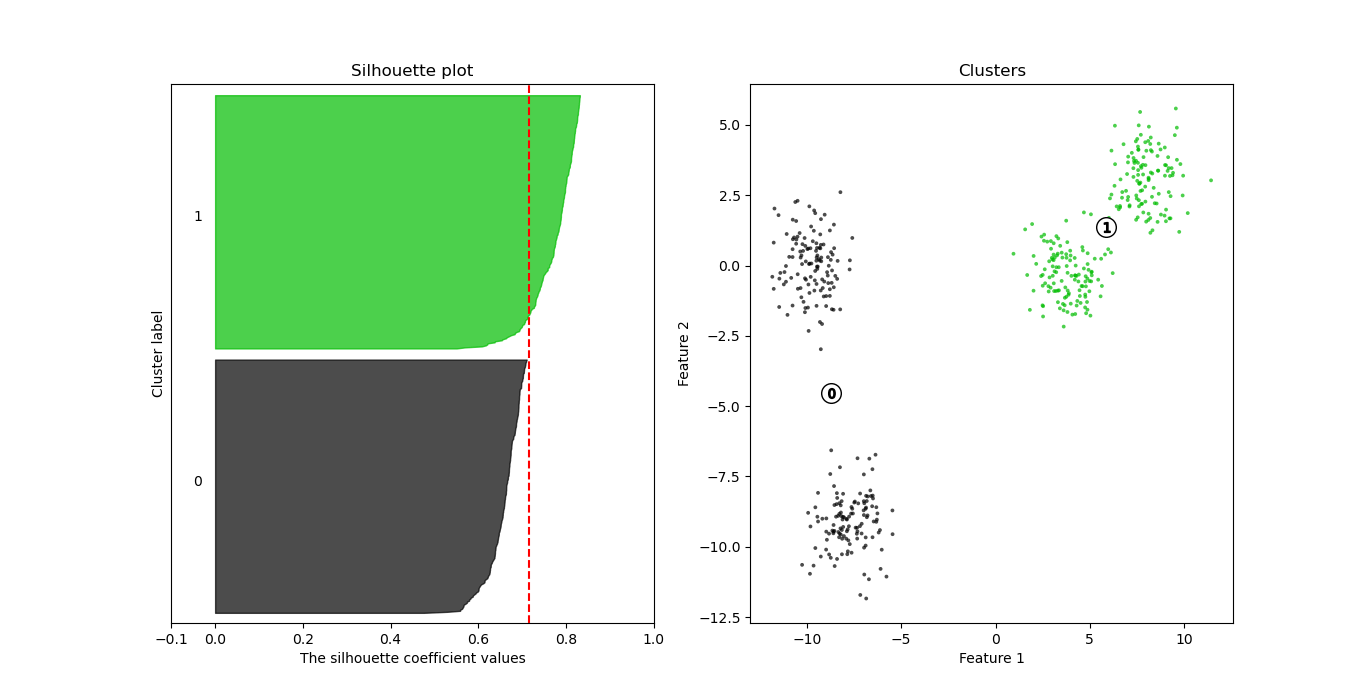 . On the left, we have the silhouette plot. The

From the right subplot, we conclude that the cohesion of the green points is higher than that of the black ones. This should explain the worse silhouette of the black cluster on the left. However, the two clusters look well separated.

5. Choosing the Number of Clusters

By plotting the silhouettes for different values of

, we can see which

For instance, the following graphic shows the K-Means results for the above data and

. The average silhouette value increases to 0.78: 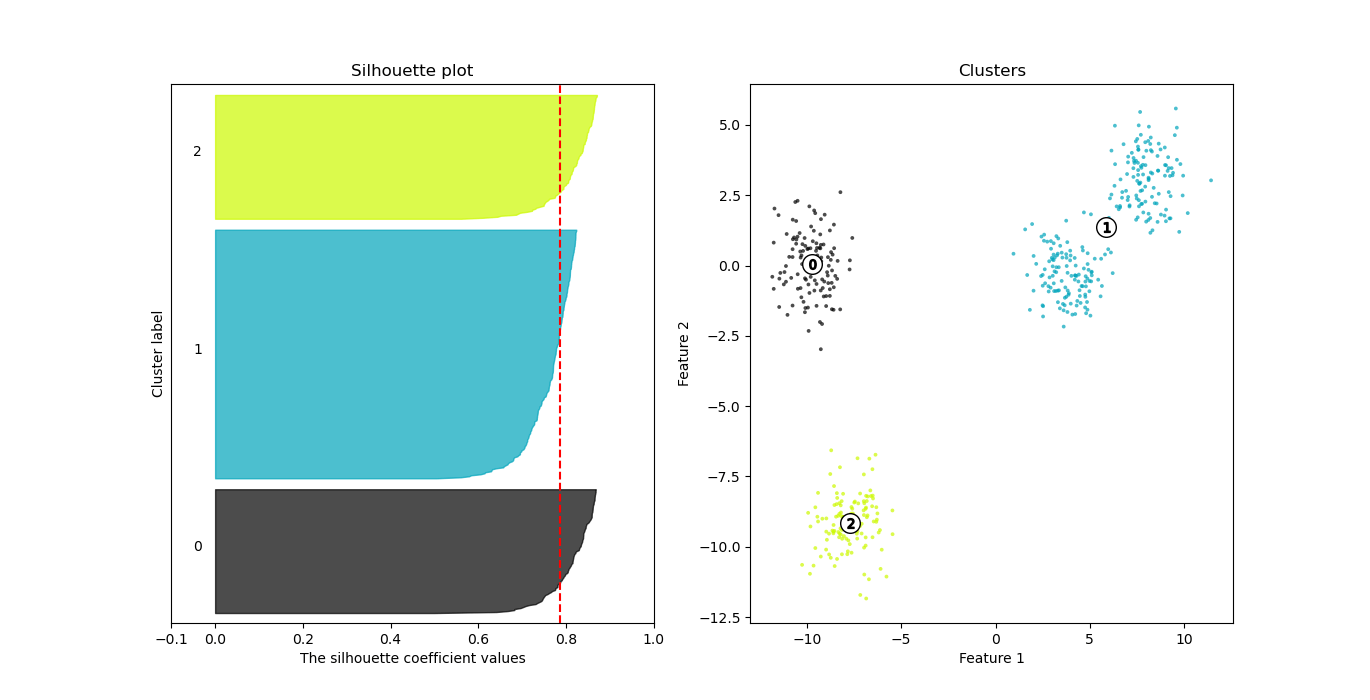 Here, we see that the right cluster remains intact, while the left one splits into two smaller ones. These two clusters have better silhouette values than the ones obtained by the blue cluster, but all three appear to be well defined.

What happens if we use 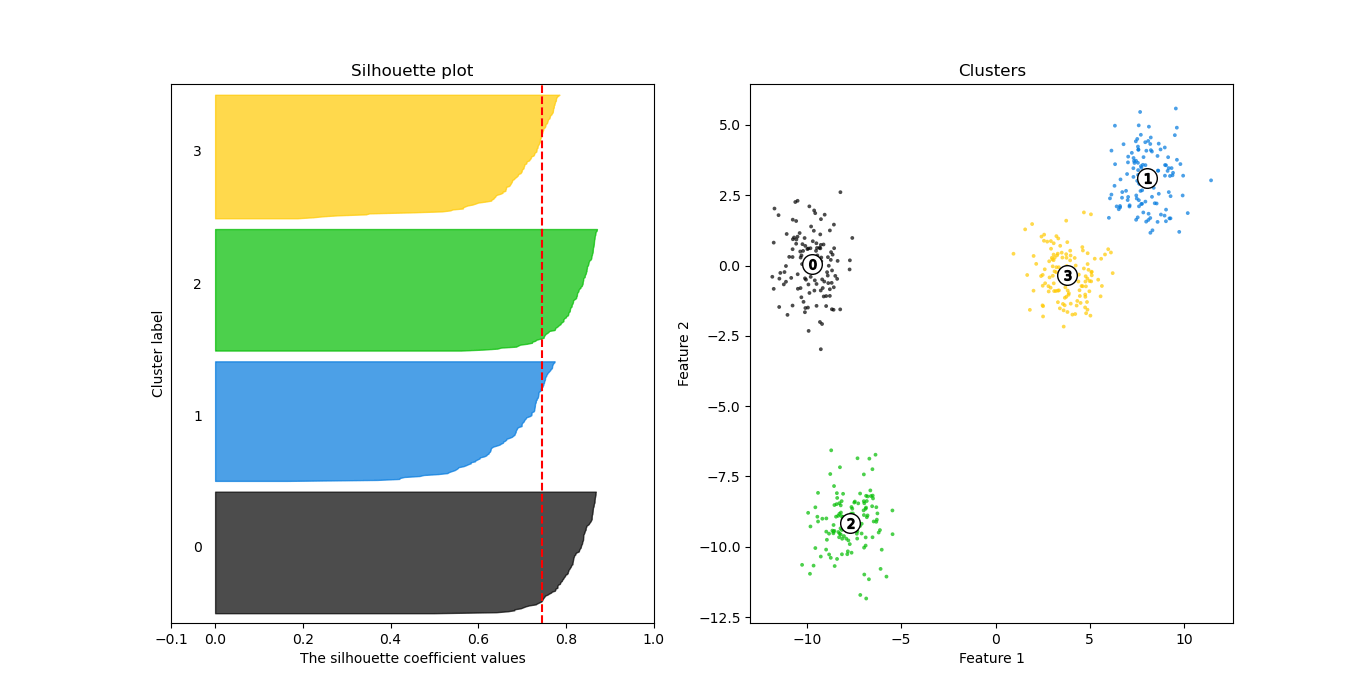 Here, we see that the green and black clusters have better silhouettes than the other two. It’s probably because their points are better separated than the points of the other two clusters.

Finally, the average silhouette values for 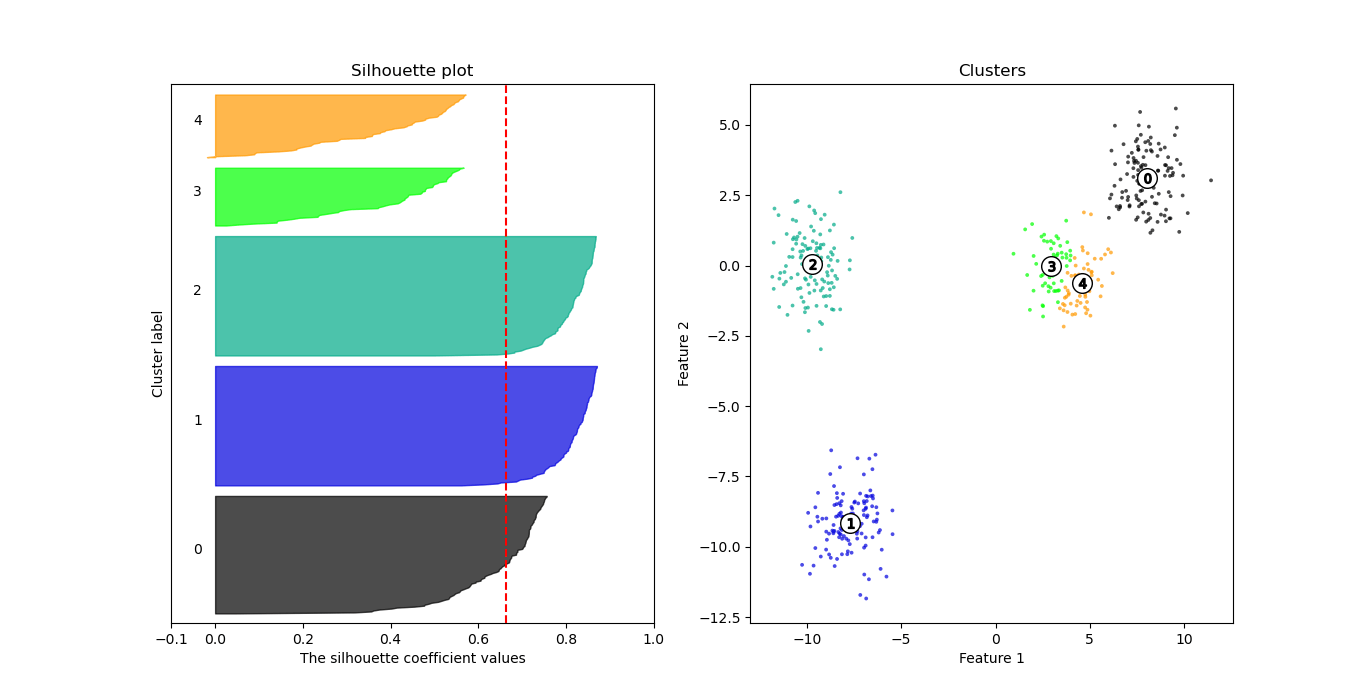 appear to be good choices, whereas

5.1. Interpreting the Mean of Silhouette Values

One way to select the number of clusters could be to choose the one with the higher overall mean. Kaufmann and Rousseeuw (1990) named the overall mean the silhouette coefficient (SC). By their classification, if

is between 0.51 and 0.70 the structure is reasonable. Lower values indicate poor structure.

Here are the mean values for

we got in the above example:

criterion, acceptable solutions are those with 2, 3, and 4 clusters. In this particular simulation, we used the data from four blobs, so the best solution should be the one with 4 clusters. But, we can see that the solution with 3 clusters looks even better.