In this tutorial, we’ll discuss the fundamental idea behind replay attacks with a practical example.

Finally, we’ll present some techniques to detect and prevent replay attacks in a network.

A replay attack is a type of network attack in which an attacker captures a valid network transmission and then retransmit it later. The main objective is to trick the system into accepting the retransmission of the data as a legitimate one. Additionally, replay attacks are hazardous because it’s challenging to detect. Furthermore, it can be successful even if the original transmission was encrypted.

Let’s take a look at the simple diagram which depicts how a simple replay attack works: 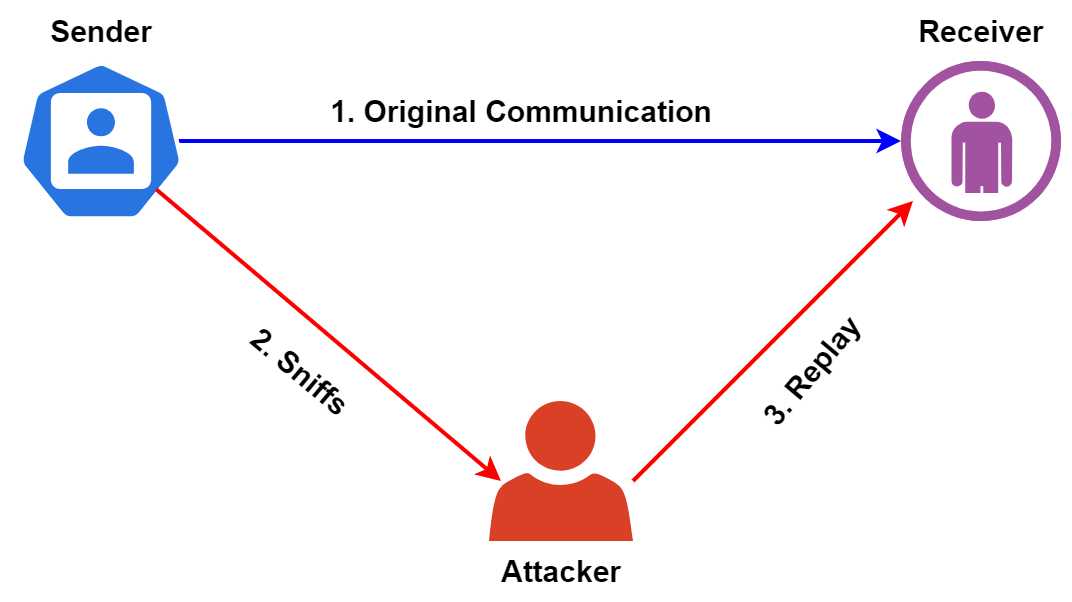 The sequence in which the events occur is vital in a replay attack. We can lunch a replay attack by following three simple steps. The first step is to wait for the data transmission to begin. The attacker then tries to sniff into the communication channel and extract the data.

As soon as the attacker gets the data, it might modify or change it based on the objective and retransmit it to the receiver. The receiver receives the tempered data but treats it as the original data.

Let’s take a look at the summary of different types of replay attacks in networking:

Let’s discuss a practical example of a replay attack in the banking scenario: 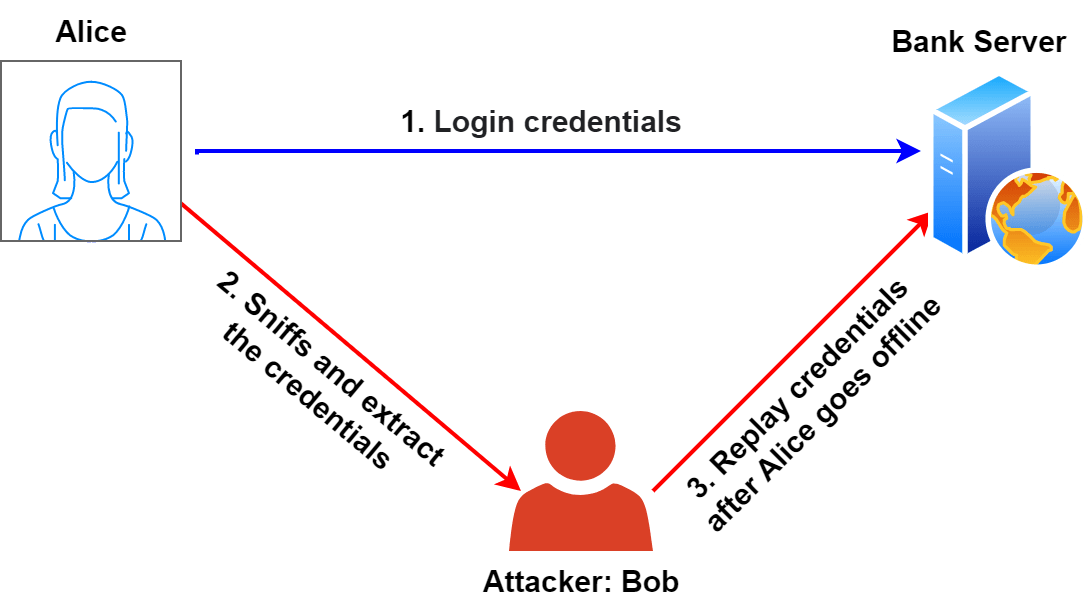 Imagine that Alice is trying to log into her online banking account using a secure web connection. When she enters her login credentials and clicks the submit button, the login request is sent over the internet to the bank’s server.

An attacker, Bob, is monitoring the network and captures the login request as it is transmitted. Bob then waits until Alice has logged out of her account and retransmits the captured login request to the bank’s server. Because the login request is valid, the server accepts it and grants Bob access to Alice’s account.

In this scenario, Bob can gain unauthorized access to Alice’s account by replaying a captured login request. However, Alice can prevent a replay attack using a secure communication channel that includes a timestamp or a nonce.

Now we know the concept behind the replay attack. Let’s discuss some techniques that we can use to prevent replay attacks. Here, we’ll discuss five techniques: the use of secure communication protocols, the use of message authentication codes, the utilization of timestamps, the utilization of nonces, and the employment of challenge-response protocols.

Another popular technique is to use message authentication codes (MACs). MACs are cryptographic checksums included in transmitted data to ensure authenticity and integrity. Furthermore, MACs can prevent replay attacks by having a timestamp or other value that changes with each transmission, making it difficult for attackers to reuse a captured transmission.

Including a timestamp in the transmitted data can help to prevent replay attacks by ensuring that the data is only considered valid within a specific time frame. Additionally, we can also use nonce while transmitting data in a network.

A nonce is a randomly generated value that is included in the transmitted data and can be used to prevent replay attacks. Because we randomly generate the nonce, it’s unlikely that an attacker will be able to guess or recreate it correctly.

Additionally, it’s important to update regularly and patch systems and devices to protect against known vulnerabilities that could be exploited in a replay attack. Furthermore, it’s also a good idea to use firewalls and other security measures to protect against network-based attacks.

In this tutorial, we discussed the fundamental idea behind replay attacks with a practical example. Finally, we presented some techniques to detect and prevent replay attacks.