In this tutorial, we’ll discuss two protocols that provide a secure connection for data transfer: SSL and TLS. We’ll explore the working procedure of the protocols.

2. Introduction to HTTP and HTTPS

We use Hypertext Transport Protocol (HTTP) for transferring website data over the Internet. HTTP sends the data in a clear-text format. This clear text format works as long as we’re not sending sensitive personal data over the Internet, including credit card numbers and passwords. A hacker sitting in the middle can get access to sensitive information if the data sent by the sender is not encrypted.

HTTPS or secure HTTP was introduced to fix the security problem in HTTP. In HTTPS, we can send data between a computer and a server in encrypted form. Therefore, a hacker sitting in the middle can only extract the encrypted data. Although, in order to see the original message, the hacker would need a decryption key that the sender safely stores.

3. Introduction to SSL and TLS

Secure socket layer (SSL) and Transport layer security (TLS) provides a secure connection between two devices on the Internet and the local network. Additionally, they also offer a mechanism to encrypt data being transferred between a device and a server. Moreover, the encryption mechanism helps prevent unauthorized access to sensitive data.

Both SSL and TLS provide authentication, encryption, and data integrity checks. A web browser connecting to a server commonly uses SSL and TLS. However, the secure version protocols, including HTTPS, FTPS, SMTPS, use TLS over SSL.

TLS is the successor of the SSL. TLS provides authentication of data by using asymmetric cryptographic keys. A website sends a digital certificate called SSL certificate to identify itself. Once a web browser checks the certificate, the data transfer proceeds further.

Usually, in an HTTP request, the server mainly provides authentication. Additionally, there’re cases when a client can also provide authentication, but it’s optional. Moreover, the client verifies the digital certificate of the server to ensure it’s a genuine website.

TLS is a newer version of SSL with significant similarities, but it still has several differences. TLS is sometimes referred to as SSL/TLS due to similarities. Let’s now talk about the history of SSL and TLS.

SSL 1.0 was developed in 1995 by Netscape and was never released. SSL 2.0 was published in 1995. An updated version, SSL 3.0, was released a year later in 1996. All the versions of SSL are deprecated mainly due to security flaws.

As all the SSL versions are deprecated now, let’s talk about the TLS handshake process.

First, a handshake happens between a client and a server. Initially, the client sends a hello message,  a list of TLS versions supported by the client, and a cryptographic algorithm to start the handshake process. Therefore, the server responds with a hello message alongside the selected TLS version, the cryptographic algorithm, and its digital certificate, including a public key.

As soon as the client receives the response from the server, it verifies the server’s digital certificate and shares a secret key encrypted with the public key of the server in order to make it safe from hackers. Next, the server decrypts the secret key using its private key. At this point, both the client and server have the key to encrypt and decrypt the data.

Now, if the client or server fails to decrypt or authenticate the data at any point, the handshake fails. Let’s now look at the diagram, which presents the handshake process briefly: 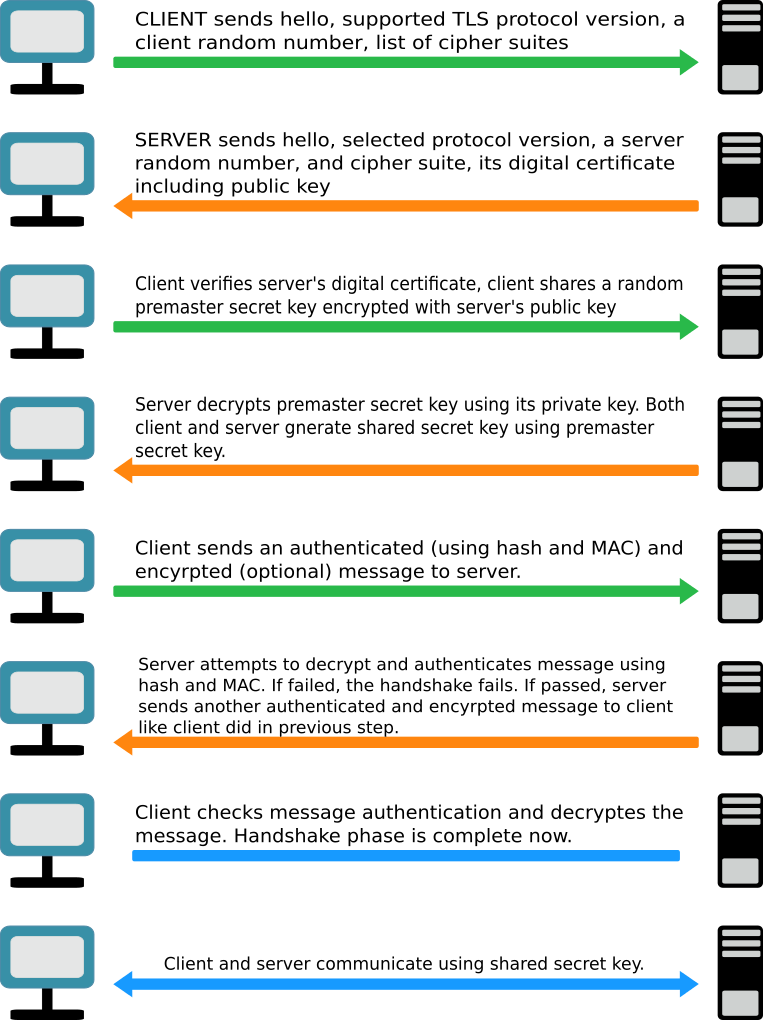 5. Differences Between SSL and TLS

Let’s look at the core differences between SSL and TLS:

In this tutorial, we discussed TLS and SSL protocols. We explained the working procedure with a diagram.

Finally, we presented the core differences between them.