In this tutorial, we’re going to explore why we can’t use Prim‘s and Kruskal‘s algorithms on a directed graph. 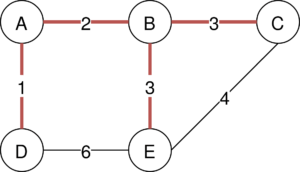 The shown graph visualizes the minimum span tree with a weight of 9.

For Kruskal’s algorithm to work, we need a graph that is undirected, weighted, and connected. Its idea is quite simple:

Here we can already notice that we might encounter a problem if we do not detect the circle correctly, as in directed graphs.

Prim’s algorithm works by starting at a random node and traversing the graph selecting the edge with the lowest weight. While this method reminds us of Dijkstra’s algorithm it actually only prioritizes the edges’ direct weight and not the whole path to the starting node such as with Dijkstra.

For a closer view we take a look at the pseudo-code:

To quickly compare the two algorithms we conclude that Kruskal’s algorithm works very well on a sparse graph and is easy to implement. Prim’s algorithm on the other hand is faster for graphs with a lot of edges but it is also harder to implement. 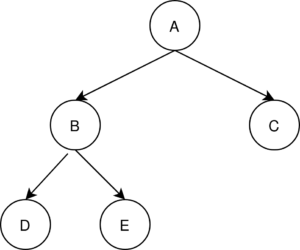 A counterexample for the Kruskal algorithm: 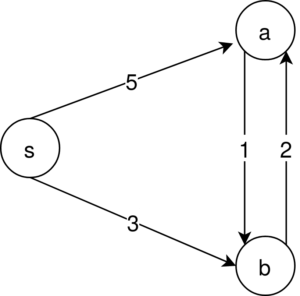 In our example, there is just one MSA possible. That is

. But running Kruskal’s algorithm, we first of all select 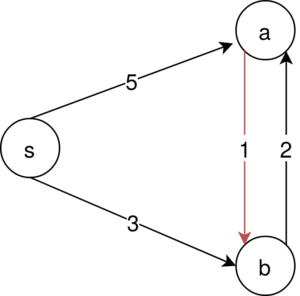 Since this edge is not contained in our MSA it is impossible to construct one from the Kruskal algorithm in this example.

For the Prim algorithm, we have a similar setup: 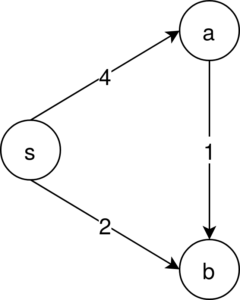 This time the only possible MSA is

. Prim’s algorithm starts at a random node, in this case,

. It then takes the edge with the lowest edge connected to

, which is the node to 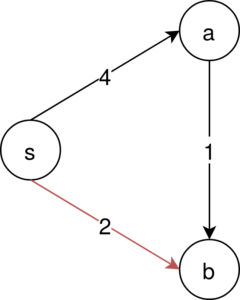 is not contained in the only MSA that the following steps won’t generate an MSA for this example.

Chiu-Liu/Edmonds’ algorithm is an alternative capable of solving the MSA problem for directed, connected graphs. For it to work we need an already chosen node r, which acts as the root for our MSA. The algorithm transforms our graph recursively into an MSA by eliminating cycles.

We describe the Chiu-Liu algorithm with the following flowchart: 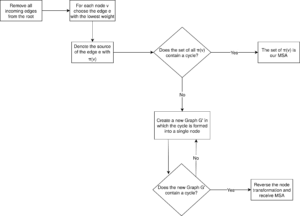 First of all, we eliminate all the edges that lead into the root, since the root of an MSA has no incoming edges. Secondly, we have a look at each node in the graph and select its lowest incoming edge e, denoting its source with

. Then we check if we already have an MSA or not. If not we recursively eliminate the cycles in the graph.

To get a better perspective we have another look at the step in which we transform a cycle into a single node:

For all nodes that are in

, we create a set

with a new weight function

.
For all edges that connect to a node in

we exercise the following rule, creating a new set of edges

we create a new edge

we create a new edge

.
3. For all edges with nodes not included in the circle we keep the edges and edgweights from the original graph.

We do this reduction until we have a Graph

that does not contain any cycles. Since the constructed

doesn’t have any cycles we have an MSA. Now we only have to transform

back into a graph with all of the original nodes.

For this, we have a look at our constructed nodes

, which have only one incoming edge, namely

. This edge corresponds to the edge

in our original Graph

We then proceed to remove the

from our original graph, to break the cycle.

Doing this subsequently for every constructed node

we end up with a graph that contains all original nodes and is cycle-free. This graph is the solution to our MSA problem.

. With a fitting data structure, for example, a Fibonacci heap, the complexity can be reduced to

In this article, we have discussed the reason why we can neither apply the Kruskal nor the Prim algorithm to a directed graph. Furthermore, we have explored an alternative that retrieves a minimum spanning arborescence for a given directed graph and a root node.