In this tutorial, we’ll review the Principal Component Analysis (PCA), and we’ll describe how to use it by choosing the optimal number of principal components.

Finally, we illustrate the application of such a technique to a popular machine learning dataset.

Given a set of

, is used to reduce the dimensionality of

by performing the linear transformation

is used to approximately reconstruct each original vector

from the compressed version

by performing the transformation

is the recovered version of the original feature vector

and it has the same dimensionality

.  The PCA consists in finding the compression matrix

and the recover matrix

such that the mean squared error computed over the set of instances is minimal, i.e., the following problem is solved:

It can be demonstrated that if

are solutions of Eq.

, then it must be

is obtained by transposing the compression matrix

. Moreover it can be demonstrated that the columns of the matrix

, correspond to the eigenvectors of the sample covariance matrix of the data

.
We remind that the covariance matrix is defined as:

is a vector whose components are the mean values of each feature:

Hence we need to compute the eigenvectors

of the covariance matrix

and sort them so that the corresponding eigenvalues

are sorted in descending order, i.e.:

of PCA can be expressed as:

The eigenvectors of the covariance matrix are called principal components.

Note that sum at the denominator is performed over the maximum number of principal components.
By summing the explained variance ratio of the first

A good strategy is to choose the number of dimensions for which the cumulative explained variance exceeds a threshold, e.g., 0.95 (95%).

Let’s now apply the PCA to the MNIST dataset by exploiting the implementation provided in the Python package scikit-learn.

We load the MNIST dataset using a keras function, and we normalize the training set in the range

), and then we compute the cumulative explained variance for each number of dimension: 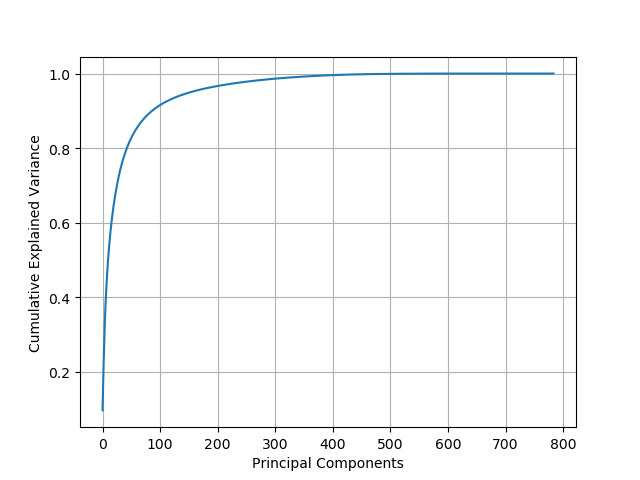 The minimum number of principal components required to preserve the 95% of the data’s variance can be computed with the following command: 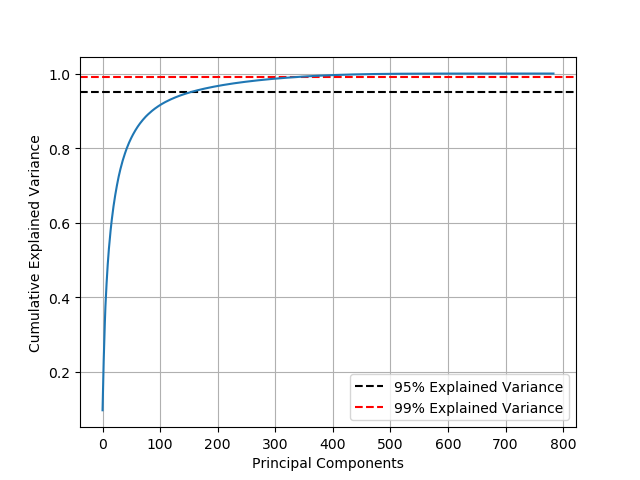 In this article, we reviewed the Principal Component Analysis, a popular dimensionality reduction technique. Then, we described how to use it by choosing the optimal number of principal components. Finally, we showed the application of the PCA to the MNIST dataset using a Python implementation.