In this tutorial, we’ll walk through different network topologies. Particularly we’ll introduce the definition of network topology and talk about the most common topologies in computer networks along with their benefits, limitations, and most frequent usages.

2. What is Network Topology?

The arrangement of a computer network, along with the physical and logical placement of devices, is referred to as network topology. It basically outlines how hardware devices are linked together and interact with one another. A network’s topology can have a considerable influence on its performance, security, maintenance ease, management, and scalability. Network topology is utilized in many different types of computer networks, including LANs, WANs, and wireless networks.

A network topology known as a bus topology connects all devices to a single wire or bus.

The network’s hardware devices use the bus as a common communication channel. Bus topology is frequently used in small networks like LANs and WANs and isn’t appropriate for sophisticated networks. Moreover, it is simple to manage and expand since there are fewer channels and connections. On the other hand, as the number of devices in the network increases, this topology struggles with limited bandwidth and cable length. Also, if the bus cable is broken or severed, the entire network will collapse:

Summary of benefits and limitations of bus topology:

A ring topology is a type of network architecture in which every computer is linked to two others on each side of it in a complete circle.

Ring topology is more frequently employed in networks like FDDI (Fiber Distributed Data Interface) and SONET (Synchronous Optical Network), which are primarily employed in large enterprises. It provides high levels of security due to its usage of the token-passing protocol, which assures that only one unit may send data at once. Moreover, it supports high-speed data transfer, requiring less cabling and channels to be installed. On the other hand, the entire network will drop down if the cable breaks or if one device is deactivated. Furthermore, ring topology is challenging to expand, as it necessitates network-wide reconfiguration and has a limited bandwidth as the number of units increases: 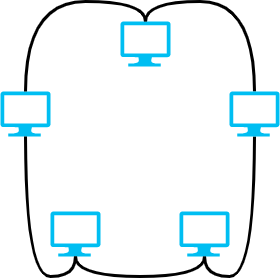 Summary of benefits and limitations of ring topology:

A network topology known as a star topology connects all devices to a single hub or switch.

All devices on the network communicate with the hub. It may be found in both large enterprise networks and small networks like LANs. It is adaptable and is simple to modify and grow. Also, it is relatively fault-tolerant since the failure of a single device or cable does not impact the entire network, and it is quite simple to expand it. On the other hand, because the central hub is a single point of failure, if it is broken or unplugged, the entire network will fail. Also, the number of ports accessible on the central hub can constrain star topology and be more expensive as it demands more hubs, switches, and cabling: 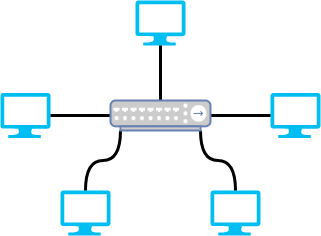 Summary of benefits and limitations of star topology:

Tree topology is a network architecture that incorporates features of both bus and star topologies.

It is arranged hierarchically, in the form of a tree, with a central hub or root node and several branches. It is used in big business networks, and it is especially beneficial for networks that must be separated into distinct parts or for better control. Because of the tree structure, this topology is highly scalable and provides good fault tolerance, as the failure of a branch doesn’t impact the complete network. On the other hand, the network collapses if the central hub (single point of failure) is destroyed. The number of ports on the main hub may also be a constraint. It requires additional cabling, hubs, switches, and network equipment, and its setup and operation can be challenging as the network expands:

Summary of benefits and limitations of tree topology:

A network topology known as a mesh topology connects every device to every other device on the network.

This provides redundancy and fault tolerance by establishing several pathways connecting the devices. Because of its high cost and complexity, it is not frequently utilized in small networks, but it is frequently seen in big and complicated networks, such as military networks. It is highly fault-tolerance and also provides high bandwidth, as every device includes multiple paths to other hardware devices of the network. Moreover, due to direct connections between each device and every other device, mesh design can offer strong security. Since each device may link to several other devices, it enables simple expansion. On the other hand, this topology is costly, complex, and energy-consuming because it demands a large number of connections: 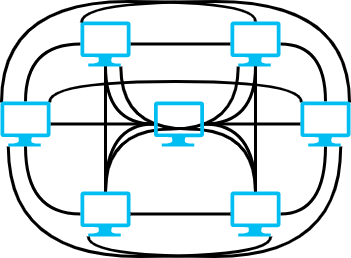 Summary of benefits and limitations of mesh topology: