In this tutorial, we’ll show how to find the pair of 2D points with the minimal Manhattan distance.

Let’s say that we have

. We want to find the two closest per the Manhattan distance. It measures the length of the shortest rectilinear path between two points that contains only vertical and horizontal segments: 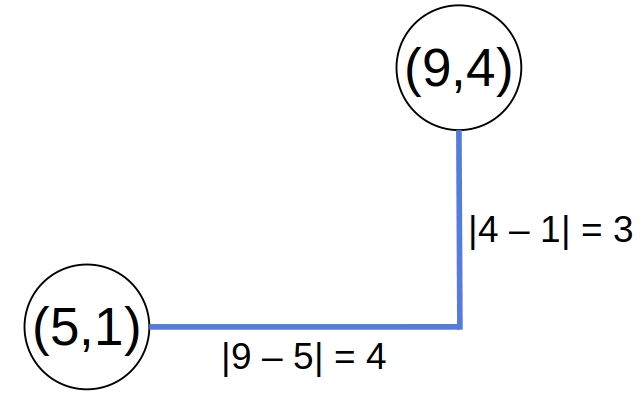 So, the formula for computing the Manhattan distance is:

We can follow the brute-force approach and iterate over all

pairs of points, calculating the distance between each two and returning the closest pair. However, that algorithm’s time complexity is quadratic.

Instead, we could design a more efficient algorithm using the divide-and-conquer strategy. Finding the closest pair is a fundamental problem of computational geometry, so it’s necessary to have a fast method for solving it.

Let’s draw a line through

to split it into the left and right halves, 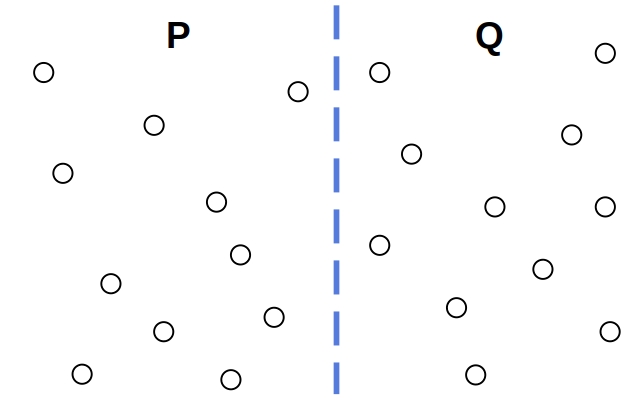 Now, the closest pair in the whole

is either the closest pair in

, the closest pair in

, or the closest pair whose one point is in

and the other in 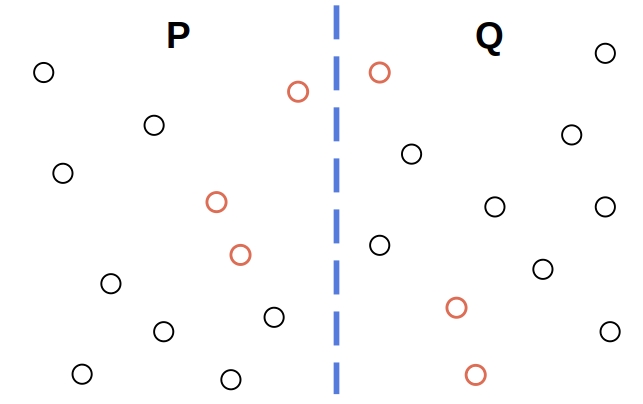 Therefore, to find the closest pair in

, we first need to determine the closest pair in its left and right halves. That’s the step where we break the original problem into two smaller sub-problems. Let’s say that

is the minimal distance in

is the minimal distance in

, the closest two points in

are at a distance shorter than

only if they reside in the

-wide strip along the dividing line: 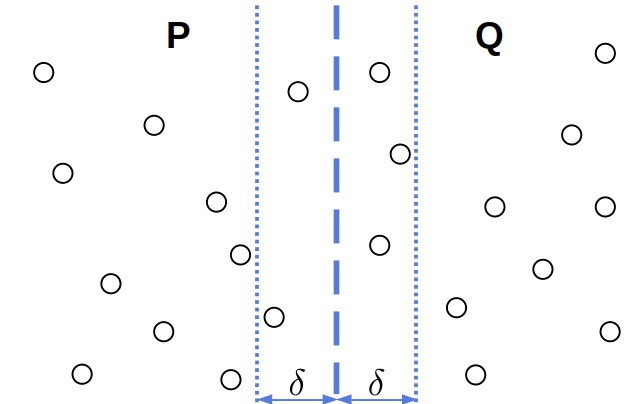 So, the combination step consists of finding the strip’s minimal distance

and comparing it to

That gives a recursive algorithm. As the base case, we’ll take

that contains three points and solve it by inspecting all three pairs, but there are other choices.

be the worst-case running time for the input with

denote the cost of finding

. Then, we have the following recurrence:

to remove all the points not in the

. In the worst case, all the pairs

can be in the strip, so an enumerative approach performs

steps and the recurrence becomes:

Using the Master Theorem, we get

. But, that isn’t any better than the inefficient brute-force algorithm, and we didn’t even consider the cost of splitting

. Can we do anything to make the algorithm faster? Luckily, the points in the strip have a special structure that will enable us to find

quickly. Indeed, if we implemented the algorithm so that

, the recurrence (2) would evaluate to an

3.3. The Vertical Manhattan Strip Has a Special Structure

are in the strip (

, we can be sure that vertically, they can’t be more than 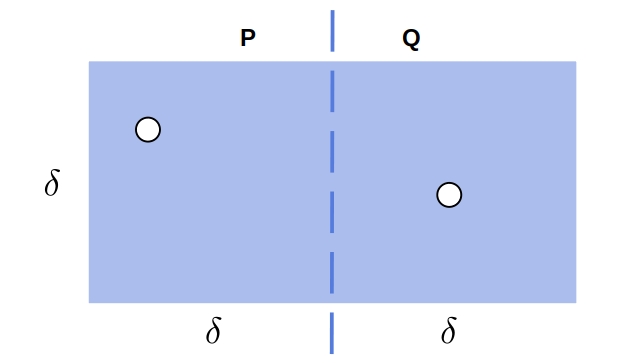 How many other points from

can be in the

? Since all the points

, at most five points from

can reside in the left half of the rectangle, and the same goes for

So, if we sorted the points in the strip by the

-coordinates, the indices of

would differ at most by 9. Therefore, for each point in the strip, we need to check only the nine that follow it in the

-sorted array. As a result, we can find

in a linear time. But, if we sort the points in each recursive call, we’ll have

to be linear in

for the whole algorithm to be log-linear.

We achieve that by presorting. If we sorted

-axis beforehand, we could split the points into the

in each call in a linear time. Let’s denote the

-coordinates, we should also keep a copy of

(let’s denote it as

). Then, we can use the middle copy’s middle index to split

into the left and right halves in

time. Before making the recursive calls, we need to split

parts just as we split

. We do that in linear time by reversing the merge step of Merge sort:

Presorting can be done in the

worst-case time by Merge sort. With

time, so the total complexity doesn’t suffer by presorting.

Finally, here’s the pseudocode of the whole algorithm:

3.6. What If We Didn’t Use the Manhattan Distance?

If we use other distance functions, the rectangle’s structure will change. For example, the Euclidean distance

admits at most 8 points:

So, we wouldn’t need to check more than seven points following each one in the filtered

In this article, we showed how to find the closest two points in a two-dimensional space endowed with the Manhattan distance.