-dimensional space. It’s a very useful tool for finding outliers but can be also used to classify points when data is scarce.

In this tutorial, we’ll learn what makes it so helpful and look into why sometimes it’s preferable to use it over other distance metrics.

2. Point to Point vs Point to Distribution

-dimensional space. To measure the overall distance between the two points we’ll need to take into consideration the difference between them on each axis. That is why the formula for

The Euclidean distance is very fundamental and widely used in statistics and machine learning approaches. However, it only makes sense in comparing two points to one another. When we try to compare a point to distribution some caveats need attention.

2.1. Distance From the Mean

This will work in the one-dimensional case but what can we do when there are more dimensions? It might be tempting to use the Euclidean distance as a measure, but when there are multiple variables involved we need to take into account the interconnection between them.

Since the classical Euclidean distance weights each axis equally it effectively assumes that the variables constructing the space are independent and represent unrelated equally important information to one another. If the data we’re working with is like this then using it is entirely fine.

If the variables involved are correlated in some way, however, which is almost always the case with real-world data, we have a problem. Let’s consider the two following scatterplots: 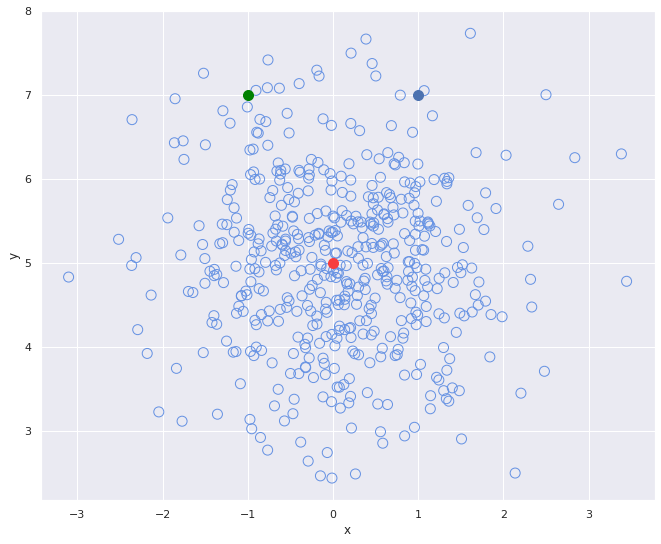 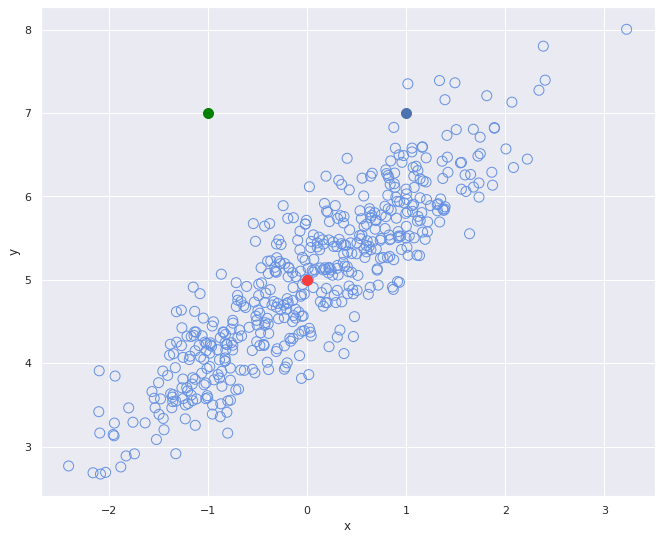 In the first plot, the two variables of the point distribution are uncorrelated, meaning that the

-position of a point doesn’t tell us anything about its

-position. And on the second graph we can see two positively correlated variables, meaning that as

also grows in some amount.

Now let’s turn our attention to the three colored points. If we accept the red point as “the center of mass” of the unfilled points distribution and use it as an anchor we can calculate that the green dot and the blue dot are equally distant from the red center point in Euclidean terms.

This is because we’re considering how the whole distribution of unfilled points varies and not focusing on individual points.

4. The Mahalanobis Distance as a Solution

Like in our example, correlated variables can give us misleading results if we just use the Euclidean distance straight away. Instead, we can first address the correlation between them. And this is where the Mahalanobis distance comes along. It is defined as:

is the distribution of data points,

is the mean vector of

is the inverse of the covariance matrix of all variables.

To better understand the formula, let’s first calculate and compare the actual values taken from the diagram above. The red, green and blue dots are given as follows in both examples:

The example data was generated using a mean of

and the consequent two covariance matrices:

By the Euclidian distance formula, we can see that the points are equally distant from each other

But if we take the distributions into account we get a different result for the green point:

In the first case where we have zero covariance, we can see that the calculations are equivalent to the Euclidean distance, however, in the second calculation where we have strongly correlated variables, we get a bigger distance for the same point, which matches our initial expectations.

Now, let’s go back to our Mahalanobis distance formula. According to the spectral theorem, we can diagonalize

and decompose it into

. And this encapsulates the formula in the more familiar

which can be interpreted as the classical Euclidean distance but with some linear transformation beforehand.

. When multiplying by the inverse of a matrix we’re essentially “dividing”, so in our case, we’re normalizing the variables according to their covariance.

This way the variables are set to have unit variance and look more like the first plot in our illustration. After that, the classical Euclidean distance is applied and we get an unbiased measure of the distance.

In this article, we covered the main arguments for using the Mahalanobis distance instead of classical Euclidean distance when comparing a point to a distribution. We also went over the actual formula that its author made and analyzed why it works.