In this tutorial, we’ll explain the maximum-minimum path capacity problem in graph theory. We’ll define what it is, how to solve it, and how the solution differs from Dijkstra’s.

We consider the weight of each edge to represent that edge’s capacity. Our task is to find the path that starts from a source node

and ends at a goal node

inside the graph. The edge with the lowest capacity in a path forms that path’s capacity.

Among all the paths from

, what we want to do is find the path of maximum capacity.

As a practical example, suppose the graph represents the capacity of water that each pipe can deliver per second. Obviously, we’d be looking for a path that can deliver the largest amount of water per second, and we can’t deliver it any faster than the smallest pipe in the path.

Have a look at the following example. We consider the source node to be

and the goal node to be 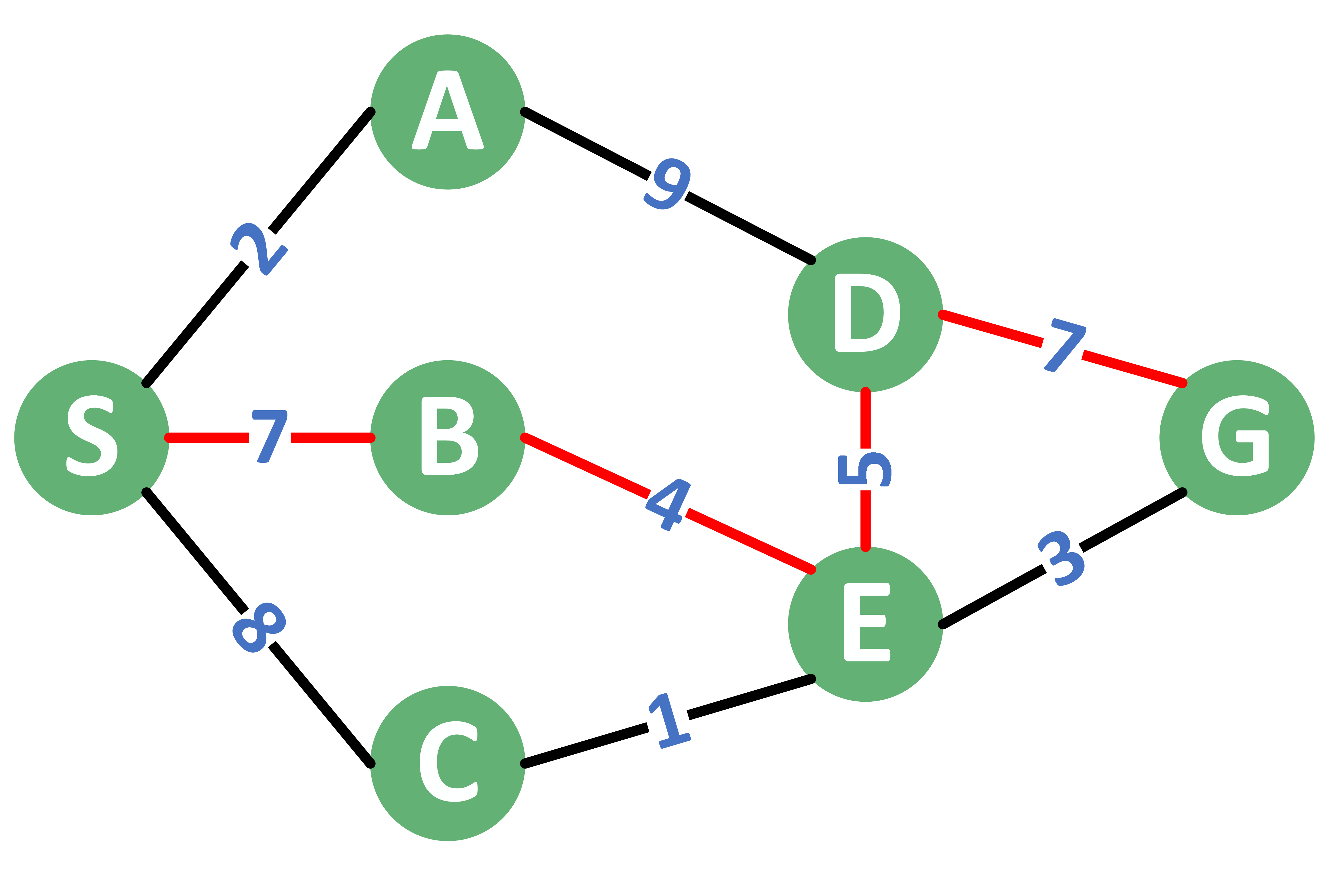 From the graph example, we see that there are multiple paths connecting node

. The following table lists the different paths along with their capacity.

Out of all the paths, path number 3 has the largest capacity, which is 4. Therefore, the maximum-minimum capacity for the given graph equals 4.

In order to solve this problem, we’ll use a modified version of Dijkstra’s algorithm.

The pseudocode of this problem is mostly derived from Dijkstra’s algorithm with the following changes:

The proof of this algorithm’s optimality is that we always process the node with the largest capacity. Hence, when we reach the goal node, all the remaining nodes inside the data structure must have a smaller capacity. Therefore, the found path would be the one with the maximum-minimum capacity.

First, we initialize the

which will store, for each node

, the node that gets us to reach node

with the maximum path capacity.

Next, we initialize the capacity of the source node with

and add all the nodes to

is to find the node with the maximum capacity so far quickly. Also,

. For this, we can use a set that stores the node with its capacity sorted in descending order based on the capacity.

In each step, we extract the node with the maximum path capacity from

. If the extracted node has a capacity equal to

, then all the remaining nodes inside

can’t be reached from

Otherwise, we iterate over all the neighbors of node

and the capacity of the edge between

. Therefore, we’ve taken the minimum capacity along the path.

After that, we compare the new capacity to the old one for node

. If the new capacity is better, then we update the information of node

with the new capacity. Updating the information of node

includes updating its capacity, updating the

value for it to become

, and using the function

that removes this node’s object from

and adds it again with the new path capacity.

, which is the calculated capacity.

The algorithm can be implemented to have a complexity of

, similar to Dijkstra’s algorithm, where

is the number of edges inside the graph and

is the number of vertices.

array to restore the path we need. Let’s take a look at the algorithm:

The algorithm is simple. We start from the

node. In each step, we add the current node to the path. Also, we move one step back to the previous node using the

node will have its previous node equal to

, we can stop going back once we reach the

The complexity of this algorithm (without the findMaxMin function) is

is the total number of vertices inside the graph.

In this tutorial, we presented the maximum-minimum capacity in a graph problem. First, we defined the problem. Next, we provided an example that better explains the concept.

After that, we highlighted the main differences between our algorithm and Dijkstra’s algorithm.

Finally, we showed the algorithm.