Graph Attention Networks (GATs) are neural networks designed to work with graph-structured data. We encounter such data in a variety of real-world applications such as social networks, biological networks, and recommendation systems.

In this tutorial, we’ll delve into the inner workings of GATs and explore the key components that make them so efficient with graphs. We’ll cover the attention mechanism that allows GATs to weigh the importance of each node’s connections, making them particularly adept at handling large and complex graphs.

Graphs are a common data structure in many real-world applications. In a graph, we organize the data into nodes and edges. Nodes represent the entities or objects of interest and edges denote the relationships or connections between the nodes.

2.1. When Do We Use Machine Learning On Graphs?

We can perform many different machine-learning tasks on graphs.

In a node classification task, our goal is to predict the class or category of each node in a graph. Such a task can be applied, for example, to predict the political affiliation of people in a social network based on their connections to other people.

We can also do link predictions. There, we want to predict which nodes in a graph are likely to be connected in the future. An example is suggesting new products in recommendation systems, based on the users’ buying history and preferences.

Sometimes, we want to classify graphs. Researchers often use this kind of formulation to predict the type of molecule a chemical compound belongs to based on its structural properties.

Finally, there’s the task of community detection, where the goal is to identify groups of nodes that are densely connected and have relatively few connections to nodes outside the group. Solving this kind of problem is very relevant to social networks because it’s important to identify groups of people with similar interests.

2.2. Why Do Traditional Approaches Fail?

Traditional machine learning approaches, such as linear regression and support vector machines, can handle fixed-length vectors of numbers. These methods include mathematical operations that are defined for vectors, such as dot products and Euclidean distances.

On the other hand, we can’t map graphs to vectors easily or sometimes, at all. Graphs consist of nodes and edges, and their numbers in a graph can vary greatly. Additionally, the relationships between nodes in a graph can be highly complex and non-linear, making it difficult to represent them as a simple vector.

Also, graphs can have different types of attributes such as node and edge attributes and also may have different graph structures, each one with its specific meaning, making it harder to apply traditional approaches.

Therefore, researchers have developed specialized machine learning techniques for graph data, such as graph neural networks, or GNNS. GNNs provides a powerful tool for transforming all of the attributes of a graph (nodes, edges, and global context) while preserving symmetries like permutation invariances.

GNNs work by updating the representations of the graph’s nodes through message passing. Each consecutive layer of a GNN updates the current representation of the graph it gets from the previous layer by aggregating the messages received from their immediate neighbors. As such, each message-passing layer increases the receptive field of the GNN by one hop: 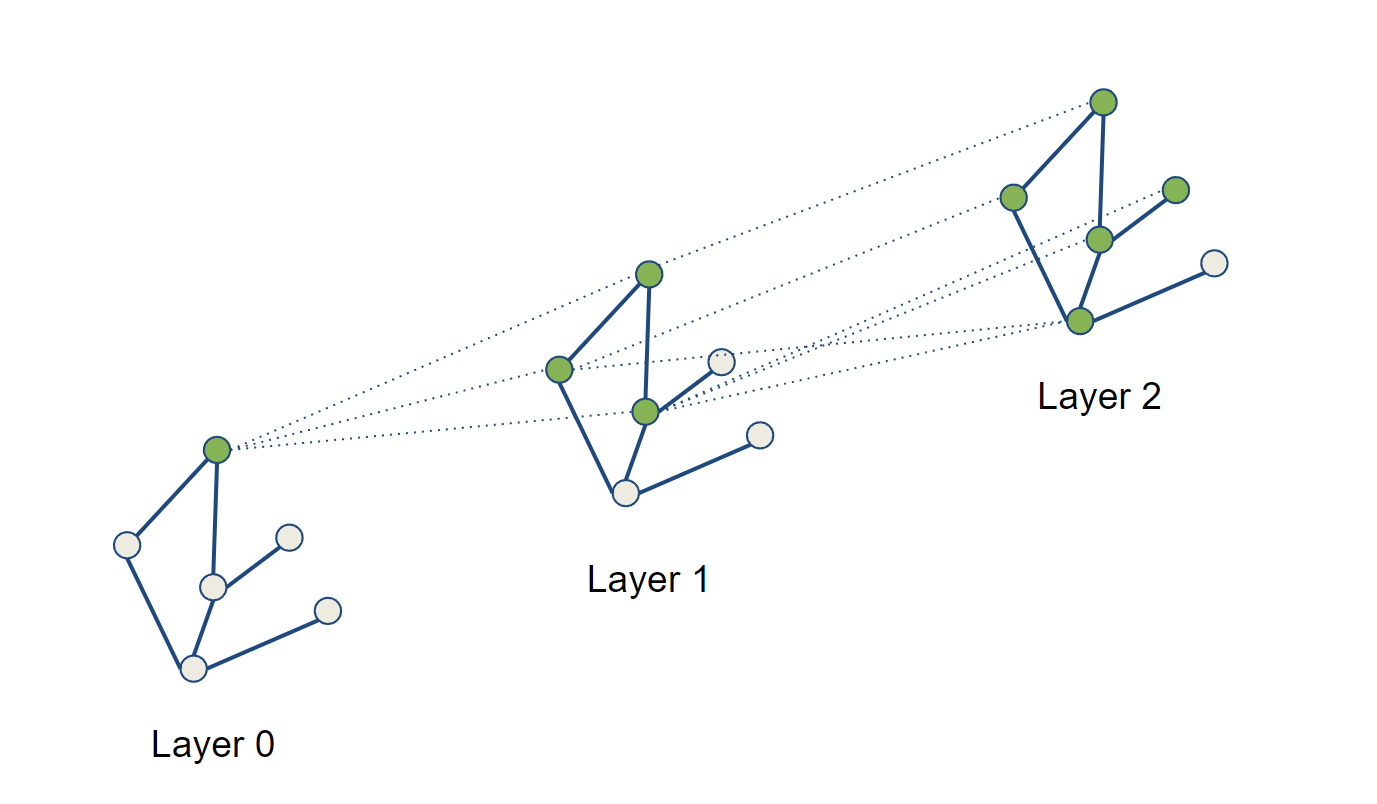 be a graph, where

is its node set and

be the neighborhood node

be the features of node

the features of edge

Then, we can express the general form of message passing between nodes:

are differentiable functions (e.g., ReLU), and

is a permutation invariant aggregation operator that accepts an arbitrary number of inputs (e.g., element-wise sum, mean, or max). Permutation invariance means that we get the same result regardless of the order of inputs. This is important since graphs have no particular node order and each node can have a different number of neighbors.

as update and message functions, respectively.

The Graph Attention Network architecture also follows this general formulation but uses attention as a form of communication. This mechanism aims to determine which nodes are more important and worth accentuating and which do not add valuable information.

The attention mechanism gives more weight to the relevant and less weight to the less relevant parts. This consequently allows the model to make more accurate predictions by focusing on the most important information.

In the case of GATs, we use the attention mechanism to weigh the importance of the connections between nodes in a graph. Traditional graph convolutional networks (GCNs) use a fixed weighting scheme for the connections, which may not be optimal for all types of graphs. Attention mechanisms, however, allow the model to adaptively assign different weights to different connections depending on the task and the graph structure.

To do that, we provide the nodes’ features together with the adjacency matrix of the graph, which specifies the connections between the nodes as an input to the attention layer.

We call the main mechanism behind this computation self-attention, which is a type of attention mechanism that allows each node to attend to every other node in the graph, taking into account the connectivity structure of the graph.

be the input features for node

for each pair of nodes

is the concatenation operation and 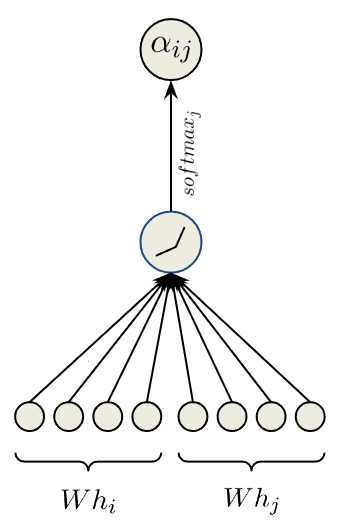 Once we compute the attention coefficients, we use them to weigh the messages of a node’s neighbors, which are the neighbor’s features multiplied by the same learnable weight matrix

. We do this for each attention head and concatenate the result of the heads together:

is the number heads and

is an activation function,

We then pass the output to the next attention layer and repeat the process until the final layer. In the final layer, we average the outputs from each attention head before applying the activation function, instead of concatenating. Formally, we can write the final GAT layer as: 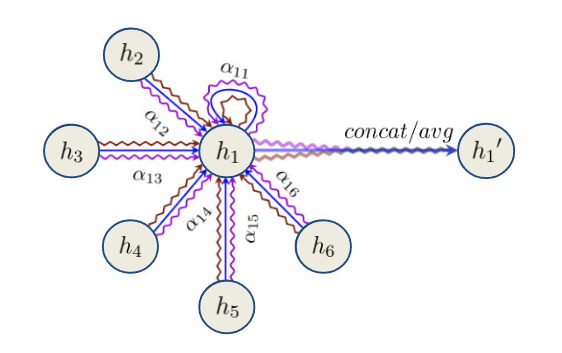 As already mentioned, GATs often can have better predictions when compared to other approaches when applied to tasks such as node classification or link prediction, thanks to the attention mechanism. Nevertheless, GATs can be computationally expensive and require a significant amount of memory to train and evaluate, especially for large graphs.

The computational complexity of this type of attention mechanism is

is the number of nodes in the graph, and

is the dimension of the node embeddings.

For each node, we calculate the attention weight for each of its neighbors by performing a linear transformation on the concatenation of the node’s embedding and the embedding of its neighbor, which results in a total of

Each linear transformation operation has a computational complexity of

is the dimension of the node embeddings.

Therefore, the total computational complexity of this type of attention mechanism is

Here’s a quick summary of the advantages and disadvantages of GATs:

In this article, we talked about various machine learning tasks that can be performed on graphs and how Graph Neural Networks (GNNs) provide a way to effectively incorporate connectivity information between nodes. Additionally, we covered the basics of GATs and how they work, including the key components of the network and the attention mechanism that allows GATs to weigh the importance of each node’s connections.