In this tutorial, we’re going to learn about the cost function in logistic regression, and how we can utilize gradient descent to compute the minimum cost.

This formula represents the probability of observing the output

of a Bernoulli random variable. This variable is either

It squeezes any real number to the

Applying the sigmoid function on

as the input approaches

as the input approaches

More formally, we define the logistic regression model for binary classification problems. We choose the hypothesis function to be the sigmoid function:

denotes the parameter vector. For a model containing

parameters. The hypothesis function approximates the estimated probability of the actual output being equal to

More compactly, this is equivalent to: 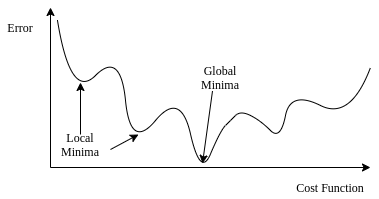 In this case, finding an optimal solution with the gradient descent method is not possible. Instead, we use a logarithmic function to represent the cost of logistic regression. It is guaranteed to be convex for all input values, containing only one minimum, allowing us to run the gradient descent algorithm.

When dealing with a binary classification problem, the logarithmic cost of error depends on the value of

. We can define the cost for two cases separately:

Which then results in:

Because when the actual outcome

and takes the maximum value for

As the output can either be

, we can simplify the equation to be:

observations, we can calculate the cost as:

4. Minimizing the Cost with Gradient Descent

Gradient descent is an iterative optimization algorithm, which finds the minimum of a differentiable function. In this process, we try different values and update them to reach the optimal ones, minimizing the output.

In this article, we can apply this method to the cost function of logistic regression. This way, we can find an optimal solution minimizing the cost over model parameters:

As already explained, we’re using the sigmoid function as the hypothesis function in logistic regression.

Assume we have a total of

features. In this case, we have

vector. To minimize our cost function, we need to run the gradient descent on each parameter

Furthermore, we need to update each parameter simultaneously for each iteration. In other words, we need to loop through the parameters

To complete the algorithm, we need the value of

Plugging this into the gradient descent function leads to the update rule:

Surprisingly, the update rule is the same as the one derived by using the sum of the squared errors in linear regression. As a result, we can use the same gradient descent formula for logistic regression as well.

By iterating over the training samples until convergence, we reach the optimal parameters

In this article, we’ve learned about logistic regression, a fundamental method for classification. Moreover, we’ve investigated how we can utilize the gradient descent algorithm to calculate the optimal parameters.