Finally, we’ll present some factors that can help us find optimal values for crossover and mutation.

It involves generating a population of possible solutions, evaluating the population, and selecting the best solutions using some operations. We repeat these processes until we find a satisfactory solution to a given problem.

Let’s look at the steps involved in a genetic algorithm: 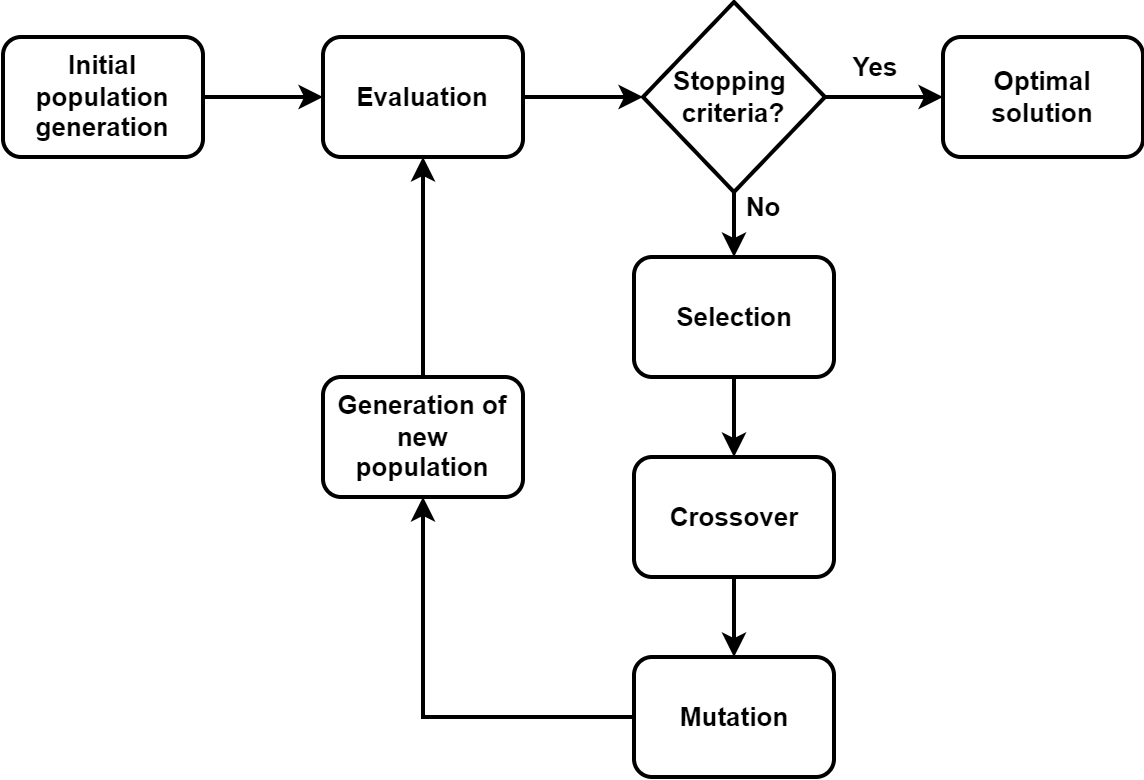 The first step of a genetic algorithm is initialization. In this step, the initial population of solutions, known as chromosomes, is generated randomly. The size of the population and the representation of the chromosomes depend on the given problem.

After the evaluation step, we terminate the algorithm if we can find our desired solution. If we can’t find the desired solution, we go to the next step. In this step, we identify the fittest chromosomes to generate the new population of solutions.

Finally, we introduce random changes or mutations into the offspring chromosomes. Mutation helps to introduce new genetic diversity into the population and can help to prevent the algorithm from getting stuck in a local minimum.

Crossover events are an essential mechanism for generating genetic diversity. It also plays a crucial role in the evolution of species. In a genetic algorithm, the crossover generates a new solution from two existing solutions. We also call the existing solutions as parents in genetic algorithms. The crossover probability is a parameter that controls the likelihood that crossover will occur between two parent solutions.

Crossover probability is often used in genetic research to study the inheritance of traits and the structure of the genome. It can also predict the likelihood of specific genetic combinations occurring in offspring. Understanding crossover probability can help researchers better to understand the genetic basis of traits and diseases. Additionally, it helps to develop new strategies for diagnosing and treating genetic conditions.

In a genetic algorithm, the mutation is a genetic operation that introduces new genetic material in a population. We utilize this technique to maintain genetic diversity from one generation of the population to another. Additionally, we use it to prevent the genetic algorithm from getting stuck in a local minimum or convergence on a suboptimal solution.

Mutation probability is a parameter in a genetic algorithm that determines the likelihood that an individual will undergo the mutation process. We usually set it to a low value, such as 0.01 or 0.001. The low value ensures only a tiny fraction of the population is mutated at each generation. A higher value of mutation probability encourages the exploration of the search space. However, it can also increase the chances of the genetic algorithm getting stuck in a suboptimal solution.

Understanding mutation probability can help researchers to understand the genetic basis of traits and diseases. Additionally,  it can play a vital role in developing new strategies for diagnosing and treating genetic diseases.

Let’s talk about the trade-off between crossover and mutation probabilities. A higher mutation probability can lead to more search space exploration. However, it can also increase the chances of the genetic algorithm getting stuck in a suboptimal solution.

On the other hand, a higher crossover probability can lead to more exploitation of good solutions. Although, it can also reduce the diversity of the population and increase the chances of convergence on a suboptimal solution.

In general, finding a balance between mutation and crossover is essential. The balance ensures the genetic algorithm can explore the search space effectively while preserving good solutions. Additionally, we can avoid convergence on suboptimal solutions.

Several factors, such as the population’s size, the problem’s structure, and the genetic algorithm’s specific goals, influence the balance between crossover and mutation probabilities.

6. Optimal Values for Crossover and Mutation

It’s often necessary to experiment with different values for crossover and mutation probabilities to find the optimal values for a particular problem. We can do it using techniques such as parameter tuning or sensitivity analysis.

Finally, we presented some crucial factors that can help us find optimal values for crossover and mutation.