In this tutorial, we’ll learn about different algorithms to generate all

-element subsets of a set containing

elements. This problem is referred to as

The mathematical solution to find the number of

-combinations is straightforward. It’s equal to the binomial coefficient:

Since the ordering of our choices doesn’t matter as we’re constructing a subset, we need to divide by

. Hence we reach the same formula:

However, generating all such subsets and enumerating them is more complicated than merely counting them. Let’s have a look at different algorithms that create the subsets in different ways in the following sections.

The algorithms we’ll review in the following sections were initially compiled in “The Art of Computer Programming” by computer scientist Donald Knuth.

Lexicographic order is an intuitive and convenient way to generate

The algorithm assumes that we have a set

}. Then, we generate the subsets containing

elements in the form

, starting from the smallest lexicographic order:

The algorithm visits all

-combinations. It recursively represents multiple nested for loops. For example, when

=3, it’s equivalent to 3 nested for loops to generate combinations of length 3:

In each iteration of the lexicographic generation algorithm, we find the smallest

, that we can increment. Then we set the subsequent elements

to their smallest values.

For instance, when we have

We can formulate the

-combinations as a Knapsack problem. Subsequently, an optimal solution involves visiting nodes in a binomial tree.

Binomial Trees is a tree family used in combination generation. They are denoted by

contains a root and subtrees 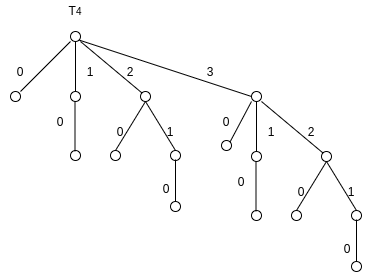 It’s easy to see that

can be iteratively constructed from

by inserting another copy of

nodes. Moreover, the number of nodes at each level

-1}. In this sense, the variations of Lexicographic generation algorithm traverses the nodes of

Let’s recall the 0-1 Knapsack Problem, where we either take or don’t take any element from a set of size

to fill a rucksack. We can formulate our problem in a similar fashion, where we have a rucksack of size

and we want to find all subset combinations of elements of set S. Let’s set

. Subsets with number of elements

are valid solutions to this problem.

In this case, every possible solution corresponds to a node of

. We can use the following algorithm to visit each valid node in preorder:

The algorithm only visits valid nodes of

, skipping non-valid nodes. After the initialization phase, we visit the combination

. Then we try to add elements to the combination at hand without exceeding the space restriction. If an element

fits into a rucksack, we place it in after exhausting all possibilities using

Another way to represent the

Imagine a revolving door connecting two rooms. There are

people in the left room and

people on the right one. Hence, we have

people in total. In this setting, we let a person go into the other room only by switching with somebody else, so that the number of people in the rooms never change: 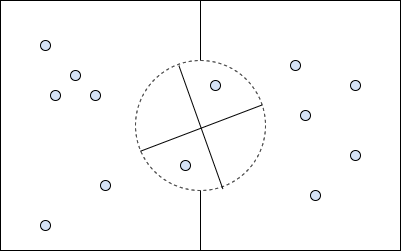 To represent the people in the rooms, we utilize

Let’s construct an algorithm to generate a sequence of combinations that don’t repeat. To generate such a sequence, we adopt Gray codes. We’ll enumerate orderings, where two successive representations always differ by one binary bit. Then, we’ll select only the binary representations containing

ones amongst them. Hence, the code sequence will satisfy the revolving door constraint.

By definition, we generate Gray binary codes of lenght

represent a binary code of length

. We canformulate it more formally as:

In other words, we generate Gray codes of length

As our set has

elements, we formulate a combination with a bit string of length

. This string represents which elements to include in the combination with a 1, and not to include with a 0. To ensure we generate only the codes valid for the

For instance, let’s consider the case

Converting the bit strings to combinations

, we see a clear pattern:

occurs in increasing order. But for fixed values of

values are increasing again. So, we can say that the characters of combination alternatingly increase and decrease.

Putting it all together, we construct the revolving door algorithm to visit 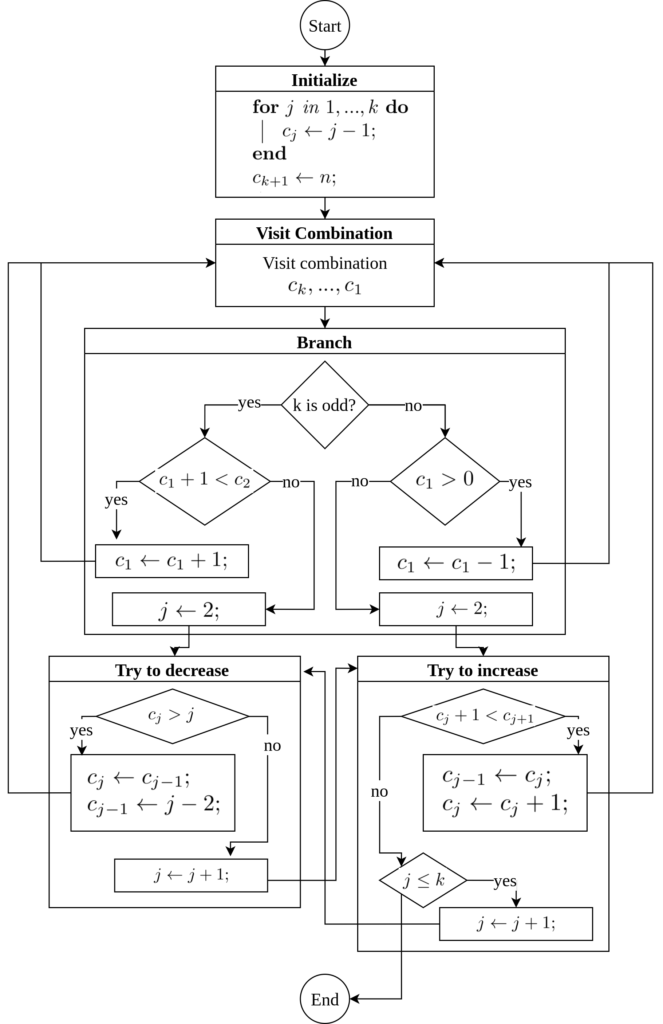 We call a Gray path sequence homogeneous if only one

is changed at each step. Since we have multiple indices changing simultaneously, the revolving door algorithm does not generate a homogeneous sequence. For instance, the transition from 210 to 320 or 432 to 420 doesn’t obey the homogeneity rule.

We can generate a homogenous Gray sequence for

This bitstring corresponds to a homogenous sequence:

Even better, we can generate all

-combinations by strongly homogenous transitions. In such a sequence, the

index moves by at most 2 steps. These generation schemes are called near-perfect.

Chase formulated an easy to compute version of nearly-perfect sequences. Again, let’s say we have

elements, and we want to find

As a result, we can use this algorithm to generate a sequence visiting all

Deducing from near-perfect combinations, we wonder if it’s possible to generate

-combination sequences by only switching adjacent bits. This form is called a perfect scheme. Mathematicians proved that finding a perfect combination is possible only if

is odd. In short, finding a perfect scheme is possible in only 1 in 4 cases. 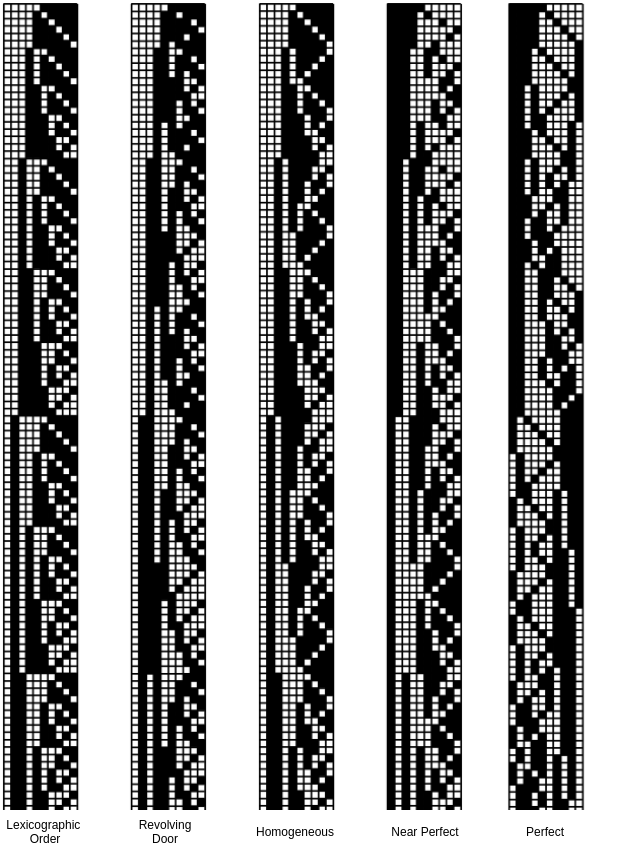 The image above was published in “The Art of Computer Programming”, volume 4A (2011).

In this article, we’ve learned about five different ways to enumerate

-combinations of a set. Lexicographic order algorithm generates the subsets of size

in alphabetical order, as the name suggests. The revolving door algorithm generates