Developers generally use the terms “library” and “framework” interchangeably. In this tutorial, we’ll learn the differences between them, as well as explore various aspects of each. We can say that a library implements a particular function. Some examples of popular libraries are React, and JQuery. We can define a framework as a collection of libraries implementing a particular methodology. Some of the more commonly known frameworks are Angular, Vue, Model View Controller, and Model View Presenter.

Let’s consider the technical difference between a framework and a library due to the inversion of control: 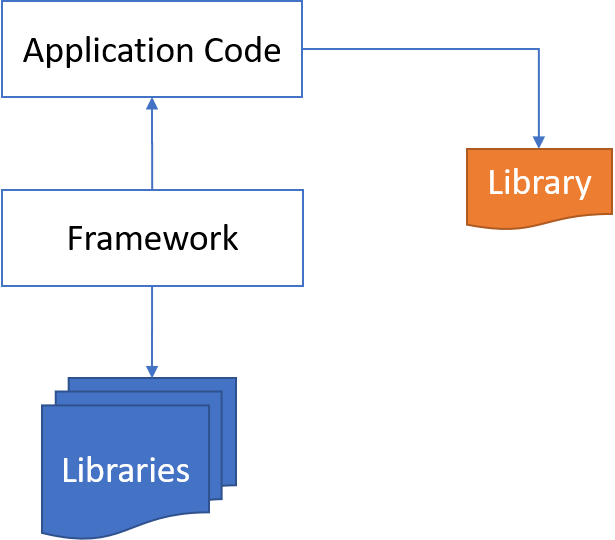 3. How Does a Framework Work?

A framework enables a coding environment that contains low-level libraries to address conventional coding issues. The objective of a framework is to deliver faster development of an application. This includes everything we need to build large-scale applications, such as templates based on best practices. Let’s consider the inner workings of a framework. If we’re using a graphical user interface (GUI) framework, it calls the code through event handlers. If we’re using a web framework, it calls the code through a request-response model. For a web application, JavaScript frameworks provide a skeleton with the tools for fast development. Internally, such a framework contains a large collection of libraries that provides the developer with inbuilt functionalities, which helps to develop an application without extensive coding knowledge.

3.1. Advantages of a Framework

There are several benefits of using a framework in general, such as ease of debugging, improved coding, easy code re-usability, and accelerated development. Let’s discuss the advantages of a web development framework:

3.2. Limitations of a Framework

Some of the issues associated with frameworks in general are:

In addition to the above, the issues associated with web development frameworks are:

Although the framework is a broad term, its main uses include:

4. How Does a Library Works?

A library is a collection of reusable, compiled, and tested code that can facilitate the automation or augmentation of application functionalities. It’s designed to support both the code developer and code compiler during the build process and the running of the application. A library implements many functions, variables, and parameters.

4.1. Advantages of a Library

Let’s discuss some of the benefits of a library:

4.2. Limitations of a Library

Now let’s look at some of the limitations of a library:

We tell libraries what to do, so they have a vast area of use. Since software development started involving complex functionalities, the need for reusable libraries increased. JQuery is one such example because it makes event handling, animation, and Ajax simpler, and works across a large number of browsers.

There are several differences between frameworks and libraries. Let’s look at few important ones:

In this article, we learned the concepts behind frameworks and libraries. A framework is used for building and deploying an application quickly. When we use a framework, we can use resources to facilitate faster development and a greater user experience. A library is used to enhance the functionality of an application. If we develop our own library, we can use the functions in many applications.