In graph theory, one of the main traversal algorithms is DFS (Depth First Search). In this tutorial, we’ll introduce this algorithm and focus on implementing it in both the recursive and non-recursive ways.

Next, we’ll explain the idea behind the non-recursive version, present its implementation, and provide an example to show how both versions handle the example graph.

Finally, we’ll compare both the recursive and non-recursive versions and show when to use each one.

Let’s start with defining the DFS algorithm in general, and provide an example to see how the algorithm works.

The DFS algorithm starts from a starting node

. In each step, the algorithm picks one of the non-visited nodes among the adjacents of

and performs a recursive call starting from that node. When all the neighbors of a node are visited, then the algorithm ends for the node

For simplicity, we’ll assume that the graph is represented in the adjacency list data structure. All the discussed algorithms can be easily modified to be applied in the case of other data structures. 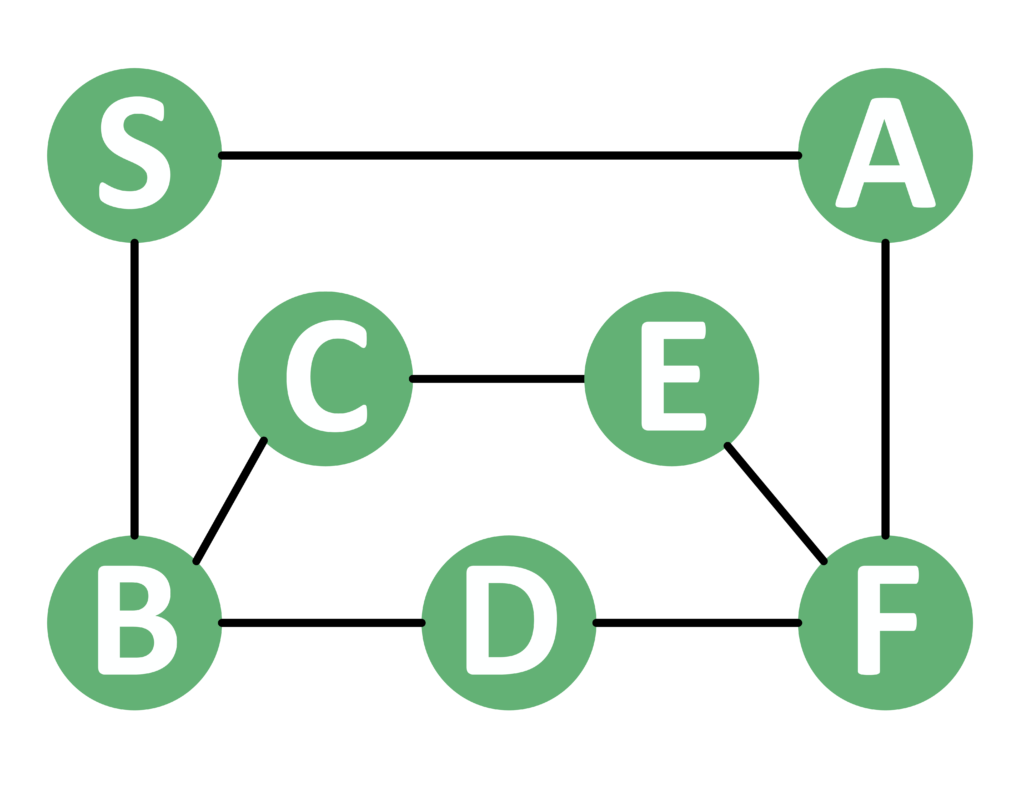 Suppose we were to start the DFS operation from node

. Let’s assume that all the neighboring nodes inside the adjacency list are ordered in the increasing order alphabetically. We’ll perform the following operations:

As a result, the final order of the visited nodes is {

Let’s introduce the recursive version of the DFS algorithm. Take a look at the implementation:

First of all, we define the

array that will be initialized with

values. The use of the

array is to determine which nodes have been visited to prevent the algorithm from visiting the same node more than once.

array is ready, we call the

function starts by checking whether the node

is visited or not. If so, it just returns without performing any more actions.

However, if the node

as visited to prevent it from being revisited in later steps.

Since the node was processed, we can iterate over its neighbors. For each one, we call the

The complexity of the recursive version is

is the number of edges inside the graph.

function. Also, for each node, we iterate over its neighbors only once. So, we’ll explore each edge inside the graph twice. Suppose the edge is between

, then for the first time, we explore

as the adjacent of

, while in the second time, we discover

as the adjacent of

Therefore, in total, the inner

Now that we have a good understanding of the recursive DFS version, we can update it to become iterative (non-recursive).

Let’s start by analyzing the recursive DFS version. From that, we can build the iterative approach step by step.

After reading the recursive DFS pseudocode, we can come to the following notes:

Let’s use the above notes to create the iterative version.

What we need to do is to simulate the work of the program stack. First of all, let’s push the starting node into the stack. Then, we can perform multiple steps.

In each step, we’ll extract an element from the stack. This should be similar to starting a new recursive call for the DFS function. Once we pop a node from the stack, we can iterate over its neighbors.

To visit the adjacents of the extracted node, we need to push them into the stack as well. However, if we pushed the nodes into the stack and then extracted the next one, we’d get the last neighbor (because the stack serves as First-In-First-Out).

After that, we’ll extract a node from the stack, visit it and iterate over its neighbors. This process should continue until the stack becomes empty.

After listing the main ideas of the algorithm, we can organize a neat iterative implementation.

Let’s take a look at the implementation of the iterative DFS.

Similarly to the recursive version, we’ll initialize an array

values that will indicate whether we’ve visited each node so far or not. However, in the iterative version, we also initialize an empty stack that will simulate the program stack in the recursive version.

Next, we push the starting node into the stack. After that, we’ll perform multiple steps similar to the recursive version.

In each step, we extract a node from the stack, which simulates entering a new recursive DFS call. Then, we check whether we’ve already visited this node or not. If we did, then we continue without processing the node nor visiting its neighbors.

However, if the node isn’t visited, we print its value (indicating that we processed the node) and mark it as visited. Also, we iterate over all its adjacents and push them to the stack. Pushing the adjacents into the stack simulates performing a recursive call for each of them.

Nevertheless, in the iterative version, we must iterate over the neighbors in the reverse order. Therefore, we assume that

in the reversed order.

Also, instead of pushing all the neighbors into the stack, we’ll only push the non-visited ones. This step is unnecessary, but it allows us to reduce the number of nodes inside the stack, without affecting the results.

Since the steps of the iterative approach are identical to the recursive one, the complexity is

is the number of edges inside the graph. 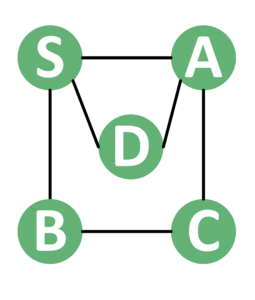 Let’s see how does the recursive and non-recursive DFS versions print the nodes of this graph.

In the case of the recursive DFS, we show the first three steps in the example below:

Note that the nodes whose recursive call didn’t end yet are marked with a blue color.

First of all, we start at the node

. We explore its neighbors and therefore move to the node

in the second step. After exploring the neighbors of the node

, we continue to the node

Now let’s see how the next three steps look like:

In this example, we have some nodes whose recursive function is finished. These nodes are marked with a red color.

we explore its neighbor

and move to it.

Now, things get tricky. We notice that

doesn’t have any non-visited neighbors. Therefore, we finish the recursive call on node

and return to node

doesn’t have any non-visited adjacents as well. Hence, we finish its recursive call too, and return to node

We notice that node

has a non-visited neighbor that is node

. Thus, it performs a recursive call starting from node

doesn’t seem to have any non-visited nodes. So, the function returns to node

Since we finished visiting all the adjacents of node

, the function returns to node

. We notice that the node

doesn’t have any more unvisited nodes. Hence, the function stops.

As a result, we notice that the visited nodes in order are {

Now, let’s check how will the iterative approach handle the graph example.

Consider the first three steps in case of the iterative DFS: 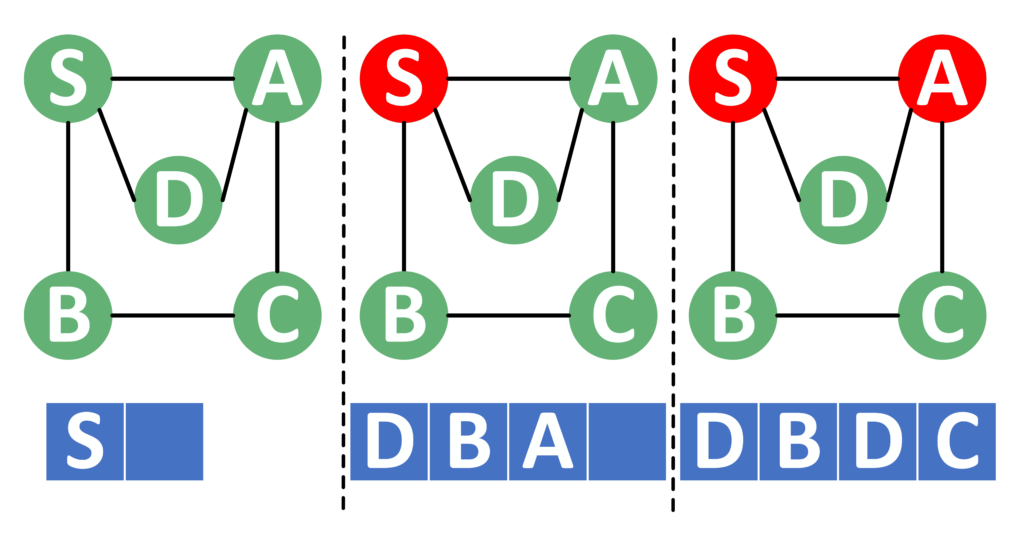 In the iterative DFS, we use a manual stack to simulate the recursion. The stack is marked with a blue color. Also, all the visited nodes so far are marked with a red color.

In the beginning, we add the node

to the stack in the first step. Once we pop the nodes

from the stack, it becomes visited. Therefore, we marked it with a red color. Since we visited node

, we add all its neighbors into the stack in the reversed order.

from the stack and push all its unvisited neighbors

. In this case, we add node

again to the stack. This is completely fine, because node

is a neighbor to both

Let’s take a look at the next three steps of the iterative approach: 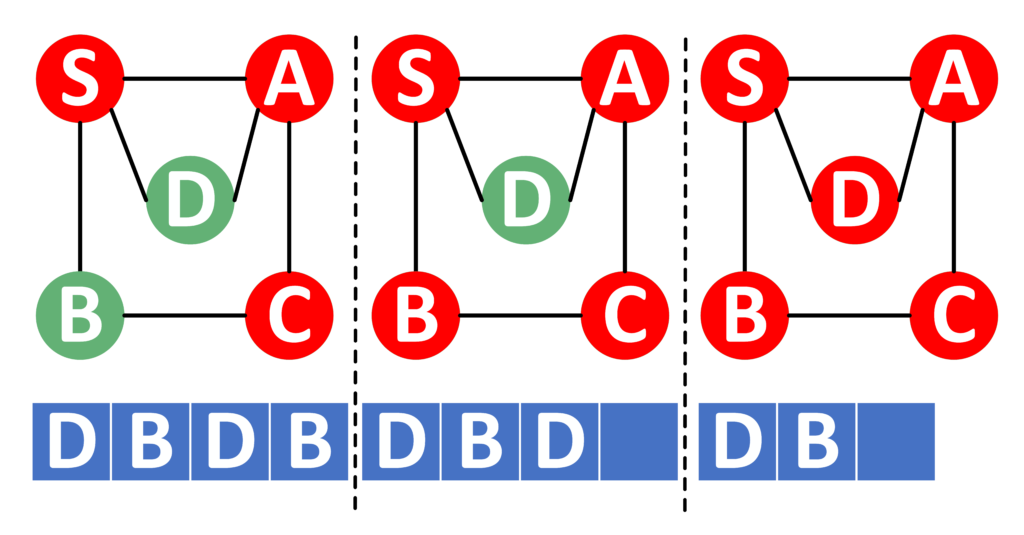 from the stack, mark it as visited, and push its adjacent

The next step is to extract

and mark as visited. However, in this case, node

doesn’t have any unvisited neighbors. So, we don’t push anything into the stack in this case.

The next node we pop is node

. Similarly, we’ve already visited all its neighbors, so we don’t push anything in its place.

After we visited all nodes, we still have nodes

inside the stack. So, we pop these nodes and continue because we’ve already visited both of them.

Note that we got a similar visiting order to the recursive approach. The order of the visiting is also {

However, in rare cases, when the stack of the program has a small size, we might need to use the iterative approach. The reason is that the program allocates the manual stack inside the heap space, which is usually larger than the stack space.

In this tutorial, we introduced the depth-first search algorithm. First of all, we explained how the algorithm generally works and presented the implementation of the recursive version.

Next, we showed how to mock the recursive approach to implementing it iteratively.

After that, we provided a step-by-step example of both approaches and compared the results.

Finally, we summarized with a quick comparison that showed us when to use each approach.