In this tutorial, we’ll analyze the implication of the correlation phenomenon into machine learning algorithms, such as classification algorithms.

The discussion that follows applies to the problem of pattern recognition in general.

The following figure illustrates another point of view on the same example:

From an epistemological point of view, the two concepts are logically distinct: the correlation is symmetric (variable

is correlated to variable

), while causality is asymmetric, as we have seen in the example just done.

Correlation is a concept that we can analyze from a statistical point of view. Given the statistical nature of most methods in machine learning, it, therefore, makes sense to speak, in general, of correlation but not of causality.

There is an excellent discussion of these concepts in our tutorial on what the correlation coefficient actually represents.

The phenomena of correlation don’t influence the structure and way of working of a classifier. However, they have a negative influence on individual predictions, which can impact the quality of the final results.

The reason lies, as we’ll see, in some generic constraints that arise when analyzing a problem with an algorithm. Of these constraints, the most important is the size of the available dataset.

Correlation and collinearity are different phenomena, but they have points of contact, so we’ll consider them as examples of correlation.

In statistics, correlation is a measure of the degree of dependence (as we have seen, not necessarily causal) between two random variables. In general, the word correlation implies a linear relationship.

Correlation can be a positive phenomenon, as it can make it possible to make predictions on one variable knowing the values ​​of another variable.

Correlation is synonymous with dependence, so two independent random variables from a statistical point of view are not correlated.

There are several measures of correlation, known as correlation coefficients (typically denoted by

The are other correlation coefficients, also sensitive to non-linear relationships, such as Spearman’s rank correlation and Mutual Information.

, of the two variables and their standard deviations

where, for a dataset with

Without referring to means, we can express it in an equivalent way as:

In statistics, collinearity (also multicollinearity) is a phenomenon in which one predictor variable in a multiple regression model can be linearly predicted from the others with a substantial degree of accuracy.

Multicollinearity does not reduce the predictive power or reliability of the model as a whole, at least within the sample data set; it only affects calculations regarding individual predictors. That is, a multivariate regression model with collinear predictors can indicate how well the entire bundle of predictors predicts the outcome variable, but it may not give valid results about any individual predictor, or about the redundancy between predictors.

For a general linear model:

reorganizing the matrix form of this expression, we can write the statistical predictor:

However, in the case of collinearity, we can’t compute the inverse. Therefore, this predictor does not exist. It is worth understanding why.

We focus our attention on square matrices, which are the only ones for which we can compute the inverse. Product

is a square matrix.

For non-square matrices, the rank is the minimum between rows and columns. In general, the input matrix for a dataset will be full-rank if all columns (features) are independent.

In the presence of collinearity (perfect multicollinearity), we have, thus, data matrices rank-deficient.

In the case of our predictor, if a generic non-square matrix

result from a dataset is rank-deficient, thus the square matrix

is rank-deficient and its determinant is null.

matrix, the inverse can be calculated according to the expression:

. From this result and the two previous properties it follows that in the case of collinearity, a linear predictor does not exist. This result is generalizable to matrices of any order.

Multicollinearity is a characteristic of the data matrix, not the underlying statistical model.

4. The Curse of Dimensionality

The number of records in the dataset conditions the maximum number of features that we can deal with in a statistical model. In certain situations, it may be necessary to apply some preprocessing technique, to transform the dataset into an equivalent dataset that offers greater guarantees of obtaining good results.

Let us consider as an example a typographic character recognition system whose purpose is to achieve the best possible classification starting from a series of images.

The first step is to identify some features (feature extraction), that is some input parameters that we can link to the category predicted by the classifier to which each image belongs.

We can intuitively agree that increasing the number of features increases the performance of the classifier. In this case, what we’re doing is increasing the information entering the system, which leads in principle to the possibility of recognizing patterns with higher resolution, and thus improving the mapping between inputs and outputs.

This situation suggests arbitrarily increase the number of features, for example by identifying each input of our system with a single pixel of the image, obtaining an input dimension of the order of thousands or tens of thousands.

However, empirical practice shows that increasing the number of features beyond a certain limit worsens the performance of the classifier. Let’s see why.

We divide each variable into a certain number of intervals. This splits the entire input space into several cells, as in the following figure:

Each instance of the dataset corresponds to a point in one of the cells, and a value of the output variable

Given a new point in the input space, we can determine the corresponding

ranges and the dimension of the input is

, then the total number of cells is equal to

The quality of our classifier gets worse when we increase

beyond a certain limit because we arrive at the situation of having cells inside which there are no representative points of the dataset. This aberration is known as the “curse of dimensionality”, and in this case, the only solutions are to increase the number of records in the dataset or decrease the number of features.

However, for real problems where the dataset is usually given by a series of measurements, the number of records is fixed when we build our classifier. In practice, the size of the dataset conditions the maximum number of features that we can “solve” within our system.

Correlation and collinearity, although phenomena that do not globally affect the performance of our classifier, are negative elements from a practical point of view. In these cases, we have redundant data that could lead our classifier to have to work with a number of features beyond the intrinsic resolving capacity of the dataset.

The rule is, therefore, to perform a preprocessing of the dataset to obtain, in a controlled and reproducible way, the least number of features containing most of the original information, where the variance of the data is a measure of this amount of information.

This is exactly what the Principal Component Analysis does.

Correlation and collinearity of the input matrix are to be considered aberrations. They introduce redundant information that can lead, as we have seen in the extreme case of the images of the previous section, to the situation of having an insufficient amount of data to have adequate resolving power in all regions of the input space.

Let’s formalize the problems we have discussed. We call

the input matrix of our dataset, formed by

rows (records of the dataset). In the case of correlations in the input we have the following problems:

What we’re looking for is a way of:

into a new set of orthogonal axes PCA1 and PCA2: 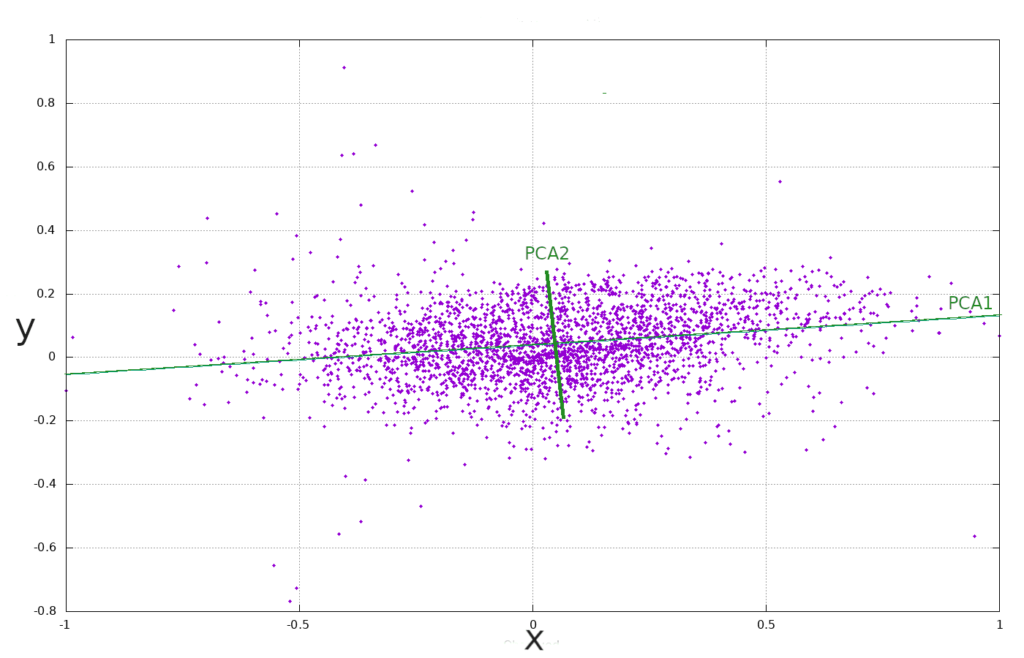 A detailed exposition of the PCA can be found in our tutorial on PCA: Principal Component Analysis.

In this tutorial, we have analyzed how correlation phenomena are generally harmful within a predictive method.

The Principal Component Analysis is one of the methodologies used for this purpose and forms part of the arsenal of techniques of obligatory knowledge for every technician in machine learning.