When we host a big party, we typically have several tasks to accomplish. Besides actually doing the work in the party location, we also have to organize all the work, talk with suppliers for food, drinks, and decoration, and deal with the guest list.

Hosting a big party involves a lot of work. So, it would be nice having many people working on it. But, of course, we still need the figure of the party host to make decisions and manage the other people working. But, with multiple people, it’s possible to divide all the required tasks and do them in parallel.

Hosting a party is an analogy to how a modern computer CPU works. The CPU is our party host. It deals with several requests and messages and divides the processing work among the available cores. The cores, in turn, are the people working at the party. They listen to the host (CPU) instructions and execute the required tasks.

With this example, we can already note that cores and CPUs are not synonyms.

Thus, in this tutorial, we’ll study the main differences and similarities between them. Initially, we’ll have a brief historical context of processing units. So, we’ll investigate the concepts of cores and CPU. Finally, we’ll compare them in a systematic summary.

2. The Context of Processing Units

Early computer systems, before the 70s, used limited processing units due to the complex integration of transistors and logical gates on a large scale in a single chip. Thus, CPUs required connected chips to work together to process a single task.

After, in the 70s, the Large-Scale Integration (LSI) enabled the creation of microprocessors with data processing and control logic in the same chip. LSI allowed the coexistence of tens of thousands of transistors and up to ten thousand logical ports in the same chip for the same CPU.

The number of transistors and logical ports in the same chip kept increasing in the following decades. So, in the early 2000s, it becomes viable to have multiple processing cores working together in the same die. It means, in practice, a CPU working with several processing cores and executing parallel tasks.

After that, other technologies, such as multithreading, make the parallelism in the CPUs even better. However, in the following sections, we’ll focus on multicore and understand the relationship between a CPU and its processing cores.

A core is a processing unit of the CPU. It is responsible for executing programs and multiple other actions on a computer.

In general, we can divide a core into three main parts: control unit, arithmetic-logic unit, and memory. Each part of the core is responsible for particular tasks:

Other relevant particular elements of a core are the clock and the buses. The following image shows an abstract core architecture: 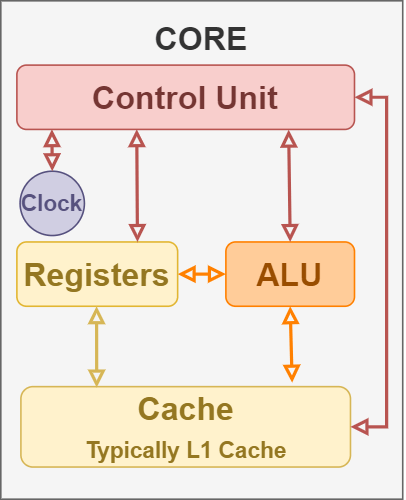 The CPU consists of the component that coordinates cores for executing tasks in a computer system. In this way, a computer with a single CPU can simultaneously execute

is the number of cores. As a note,

is the total number of available threads if the CPU cores employ multithreading.

In addition to hosting and coordinating the processing cores, the CPU establishes the communication between other components of a computer system and processing cores (through their control unit). To do that, a CPU generally has controllers for memory accessing and data I/O.

The CPU commonly contains an extra level of cache shared within all the processing cores (typically a layer two or a layer three cache). Furthermore, it is possible to integrate a GPU into the CPU. Actually, the CPU can host multiple different components, benefiting them by being close to the processing cores. 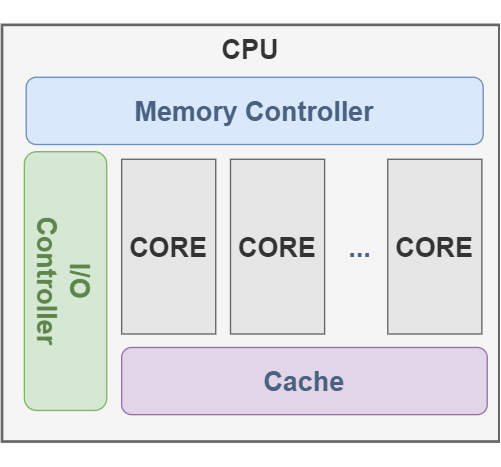 We studied the concepts of processing core and CPU. Both concepts are related to the execution of tasks in a computer system. However, they aren’t synonyms.

A CPU is a component of computer systems that manages and executes tasks. Thus, controllers, cache memory, and, most important, processing cores compose a CPU.

Processing cores, as previously stated, are part of the CPU. They actually process tasks on a computer. Typically, they have some standard elements. The most prominent of them are CU, ALU, and memory.

The following table compares and summarizes information of processing cores and CPUs:

We can conclude that, in fact, processing cores and CPUs are not the same things. While cores actually process tasks, a CPU is responsible for controlling the cores, as well as interfacing data from other computer system components to them. So, a processing core works within the CPU, and one depends on another to accomplish the computer tasks.