In graph theory, it’s essential to determine which nodes are reachable from a starting node. In this article, we’ll discuss the problem of determining whether two nodes in a graph are connected or not.

First, we’ll explain the problem with both the directed and undirected graphs. Second, we’ll show two approaches that can solve the problem.

Finally, we’ll present a comparison that lists the main differences between both approaches, and explain when to use each one.

In this problem, we’re given a graph with

edges. The task is to answer multiple queries. In each query, we’re given two nodes

, and we’re asked to determine whether we can reach node

Due to the difference between directed and undirected graphs in the direction of edges, we need to examine the problem differently for each of these graphs.

Hence, we’ll explain the problem from the perspective of each graph type.

Let’s use a graph example to explain the idea better: 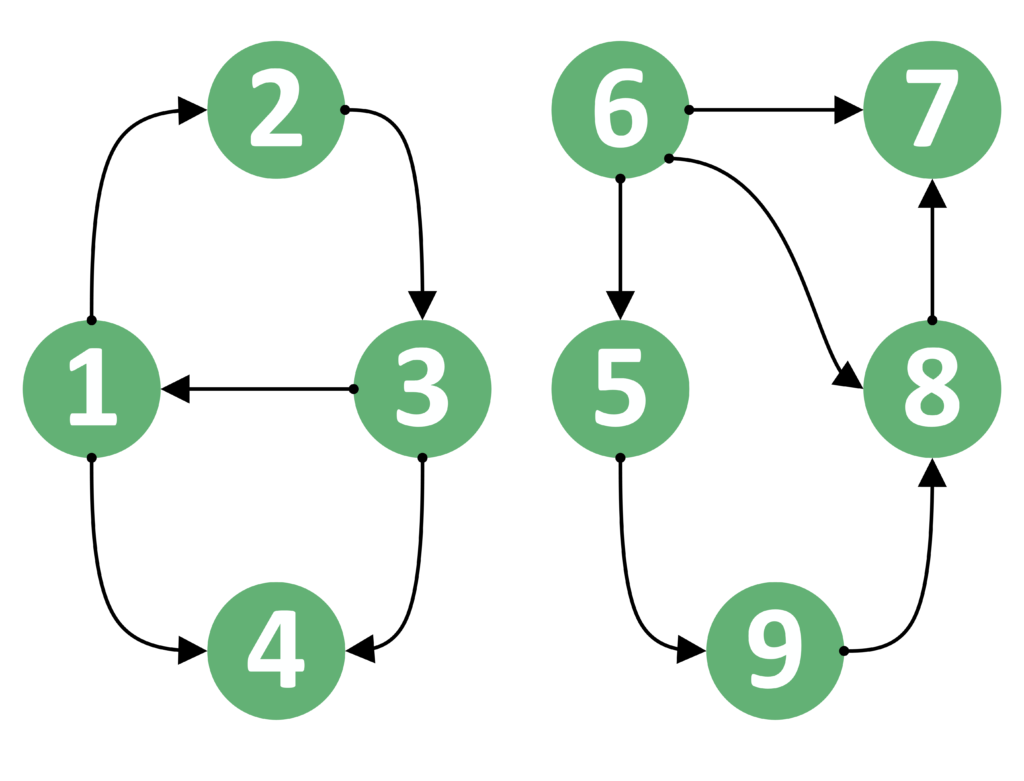 For example, suppose the starting node

is node 1, and the ending node

is node 3. In this case, the answer should be

Now let’s take the reversed case. If the starting node

is node 3, and the ending node

is node 1, the answer would still be

, because we have an edge directly from node 3 to node 1.

However, this is not always the case. Suppose

because we can go from node 1 to node 4. On the other hand, the reversed case, where

is node 1, has the answer

Even more, both cases for nodes 1 and 8 have an answer equal to

From this example, we can conclude that the order of the starting and ending nodes is important. Therefore, we can’t switch nodes

in the query and expect to get the same answer. 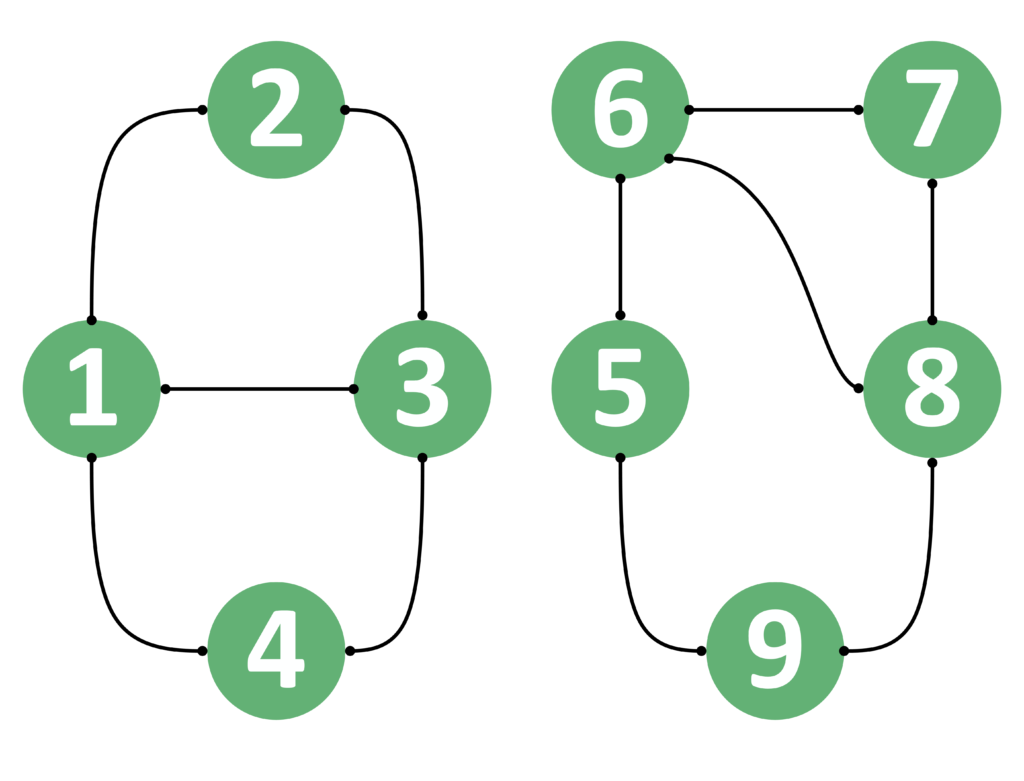 is node 3, then the answer is

because we can go from node 1 to node 3.

Similarly, we can go from node 3 to node 1 as well. Therefore, if

is node 1, the answer will still be

However, if we take node 1 to be

because we can’t reach node 8 starting from node 1. Likewise, if

is node 1, the answer is still

Now that we defined our problem well enough, we can jump into discussing the solutions. We’ll assume that the graph is stored in an adjacency list for simplicity.

The naive approach is based on performing a DFS traversal from the starting node of each query. If we manage to reach the ending node, then the answer is

. Otherwise, the answer is

. Let’s take a look at the implementation of the naive approach:

In the beginning, we’ll initialize the

values and call the DFS function starting from node

Inside the DFS function, we’ll first check whether we’ve reached the ending node

, indicating that the current node was visited before. Thus, if we were able to reach

as the current node

. This means to continue searching for

starting from the node

If this call returns

as well, without checking other neighbors.

However, we may perform a DFS operation from all neighbors, and none of them return

. In this case, we return

as well, indicating that we weren’t able to reach

from the current node.

for each query, where

is the number of edges inside the graph. The complexity is equal to performing a depth-first-search over a graph.

4. Finding the Component of Each Node

Let’s explain the general idea of this approach first. Then, we can discuss the implementation.

, then we can reach

. The reason is that all edges can be passed in both directions.

Therefore, the only case when we can’t reach

is when each of them is in a different component. However, if both nodes are inside the same component, then they can be reached from one another. 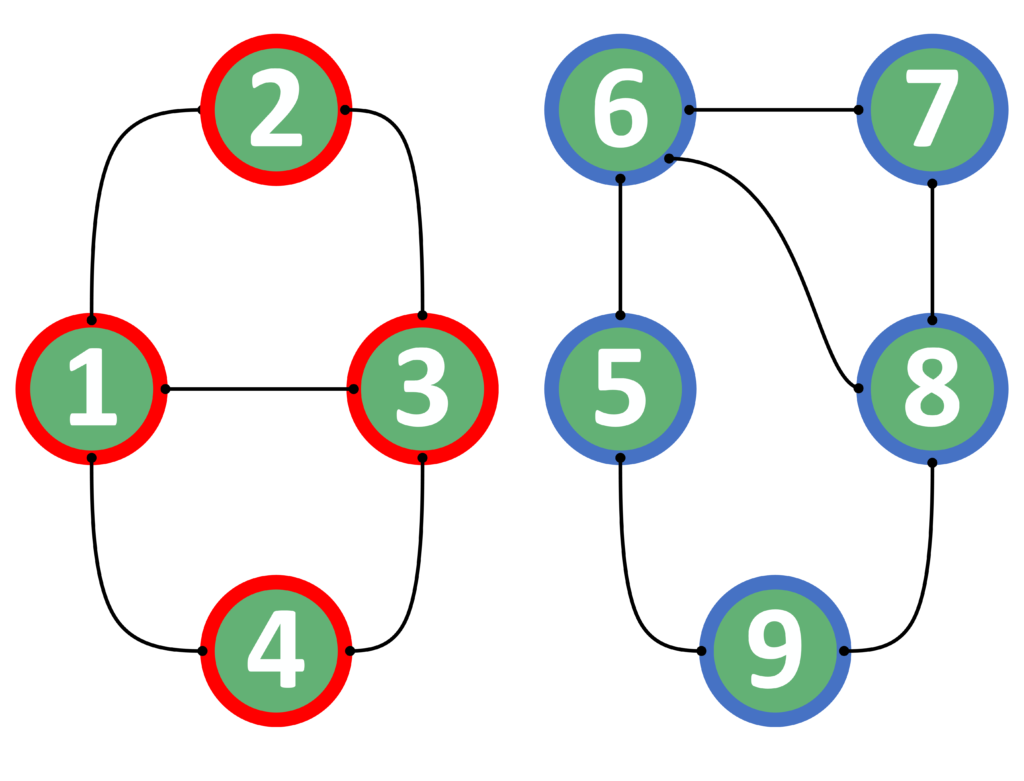 As a result, we can build our approach based on two steps:

Now, we can dive into the implementation of this approach.

Take a look at the implementation of the precalculation step:

We start by initializing the

array with -1, and the variable

Next, we iterate over all nodes inside the graph. For each node, if it hasn’t been visited so far, we start a DFS operation from this node. Before that, we increase the

variable by one, indicating a new component to be explored. Also, we pass several parameters to the DFS function:

At the beginning of the DFS function, we check to see if this node has been visited before. If so, we simply return and don’t explore the current node. Otherwise, we mark the current node as visited.

Finally, we iterate over all neighbors of the current node and perform a recursive DFS call starting from each of these neighbors.

The complexity of the precalculation step is

is the number of edges inside the graph. Note that this step is performed only once, before answering any query.

After performing the precalculation step, we can answer each query efficiently. Take a look at the implementation of answering each query:

The implementation is rather simple. We just check to see if the component identifier of the node

equals the component identifier of the node

because we’re only checking the values stored inside the

Let’s consider the following table that lists a comparison between both approaches:

When considering undirected graphs, the approach based on connected components has a better complexity. The reason is that we perform the precalculation step only once. After that, each query can be efficiently answered in

In this tutorial, we presented the problem of finding whether two nodes inside a graph are connected or not.

In the beginning, we explained the problem in the case of directed and undirected graphs.

After that, we presented two approaches that can solve the problem.

Finally, we listed a comparison table that showed the main differences between both approaches and showed when to use each approach.