At the end of this tutorial, we’ll be able to implement an algorithm that calculates the average in a set of circular data points.

This tutorial will prove useful if we’re working with spatial data and building geospatial applications. Very frequently, as is the case when we work with geospatial polygons, we’re given some sets of points, and we have to find a new one that is somewhere between them. Other times, when we work with geospatial distances, we have to find a point whose sum of distances from a set of points is minimal. In these cases, we’ll want to find the average in a set of circular data points.

A set of circular data points is characterized by two coordinates:

. These coordinates must also satisfy the Pythagorean equality that

for some constant radius

. In the case of the unit circle, this radius is assumed to be 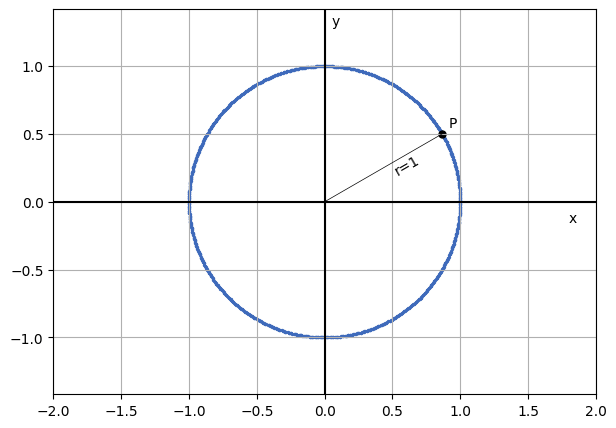 Any other circle is a scaled-up version of this unit circle. For this reason, we can study the unit circle, knowing that any other can later be obtained by simple scaling.

2.2. Sampling the Unit Circle as a Cartesian

If we have a unit circle, we can sample a set of points from it and thus develop a set of circular points. Let’s see how we can do that and develop our dataset.

Does this mean that the second coordinate is uniquely identified? No, unfortunately, it doesn’t; for each given value of one coordinate of a point on the unit circle, there are, in fact, two possible coordinates that correspond to points in the same unit circle: 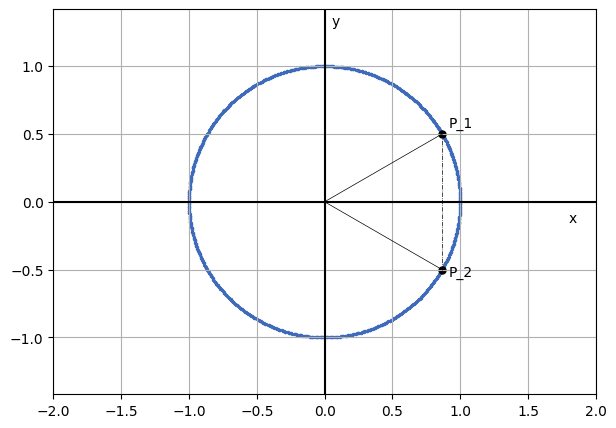 We can say, therefore, that the function that associates a

coordinate to a given

coordinate of a point on a circle isn’t a function but rather a map. Two points correspond to each value that we associate to a given coordinate, so a map that gives us points

given an input coordinate

If we want to generate a single point, we could randomly select an

, then flip a coin and choose

if the coin lands on the head or

otherwise. The point we sampled corresponds to

in the first case or

If we then want to generate

points drawn from the unit circle, we could simply repeat this operation

times and thus create our dataset.

If we want to create a dataset comprising points sampled randomly from the unit circle, we can’t simply accept both

for each draw and insert both into our dataset. We’d like to do that, as it would decrease the number of draws we have to perform from

; however, if we did that, the points we’d draw are no longer independent draws. In fact, we’d be able to guess another point in a dataset, given a point

The previous method is thus not optimal since it requires drawing two random numbers per point: one for the

coordinate. However, there is a better method based on a different definition of a circle.

A unit circle can be defined as the space spanned by a rotating segment of length 1 around the origin:

With this type of definition, a point on this circle can be uniquely identified by determining the angle  existing between the rotating segment and one of the two basis vectors for the plane: 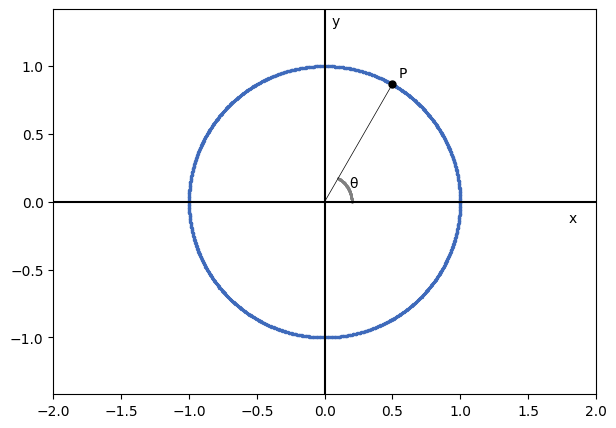 Most frequently, we select the

axis as the one with respect to which we measure the angle. If the points come in polar coordinates, then they are defined as an ordered pair

is a radius, and

is the angle with the

axis. If we have a point in polar coordinates, but we want it in Cartesian coordinates, we can always convert via this transformation:

Notice that, for the unit circle, the Cartesian coordinates of a point equal the output of the two trigonometric functions associated with the corresponding angle.

If we’re working in polar coordinates, and we want to draw a random point on a circle of radius

, all we have to do is draw a random angle

from the uniform distribution

, and repeat for as often as necessary.

3. Calculating the Average of a Set of Circular Data

Now that we have a method for drawing random points from a circle, we can calculate their average. In general, if we have a set

, then we define its average

is provably contained in

. This is because the set from which the variable is created, the set of the real numbers, is closed under the operations of addition and division that make up

3.2. The Average in a Bivariate Distribution

If we have a bivariate distribution

real numbers, such that

, we can define the average

of this bivariate distribution as:

In other words, if we have two real variables, the average of the bivariate distribution can be calculated by independently computing the average of each of the two variables. The same principle generalizes to any

3.3. Average of a Set of Circular Data

A set of points drawn from a circle doesn’t however comprise independent variables, and it doesn’t, therefore, fall under the hypothesis of multivariate distribution described above. This is because we impose an additional constraint between the

coordinates of the points of a circle. In fact, if the point

-sphere, then the following relationship must persist:

There is however no guarantee that the average of the coordinates of several points, with each point satisfying the previous condition for the same, unique

Let’s consider the trivial case in which the two points,

, lie at two opposite poles of the unit circle: both points then satisfy the conditions that they lie on a circle of radius

. The average computed according to the previous rule, as

This average doesn’t satisfy the condition of the unit circle because its squared coordinates aren’t equal to 1. This may satisfy us in some cases, as we might, for example, be interested in finding the barycenter for a gravitational system of static objects of equal mass. In that case, the average computed above will suffice.

However, if we want to compute averages that lie on the same circle as the points they refer to, we need to impose some additional constraints.

3.4. The Average Itself Is on a Circle

To find an average of points that lie on a circle, with the average itself on that circle, we should refer to the considerations we made above and convert all coordinates to their polar form. Then, we compute the average of the polar coordinates, which guarantees that the result lies on the circle.

If we want the average of the two points

, in this order, to be located at

, we could then calculate a value of

. In doing so, we can find the average angle

This gives us a nice angle of 90 degrees, orthogonal to the

4. The Algorithm to Compute the Average

In general terms, the procedure for computing the average of a set of circular data is as follows.

We begin with a set of

. We can express their coordinates as tuples, as

. Then, if we assume that they all belong to the same circle, we compute the circle’s radius as

. We only need to do it for the first tuple since the radius is constant.

In polar form, the radius

is the first of the two coordinates for each of the

points. The remaining coordinate, the angle

, can be calculated as a function of a temporary variable

Then, according to the signs of

has thus been computed, its average can be calculated as:

The point on the circle that corresponds to

is therefore the one that we find by transforming back into Cartesian coordinates:

This point with coordinates

is, finally, the average of the points of the set of circular data. We can prove that this point is guaranteed to lie on the circle with radius

The last case to consider is where the radius can vary. This can happen if all points are drawn from a spheroid with the same center but with some variance in its radius. This is the case, for example, for all points drawn from the surface of Earth since the radius of the planet isn’t constant.

In this case, it isn’t sufficient to average out the angles

. Instead, we have to average two variables: the angle itself, and the radius as well, with the latter calculated with respect to every single point.

, we can obtain the associated radius

. Then, the average point

for the set of points becomes

, found by averaging out all computed radii.