The idea of augmenting paths comes up in two different contexts in computer science. These are matching theory and the maximum flow problem. In both cases, we can use augmenting paths to increase the size of an existing solution. This way, the solution gets closer to being optimal.

In this tutorial, we’ll discuss what exactly are augmenting paths. First, we’ll see them in the context of matchings in a graph. Then, we’ll study them in relation to the maximum flow problem. We’ll also briefly discuss some algorithms that make use of augmenting paths.

Before we can talk about what augmenting paths are with respect to matchings, we need a few definitions. A matching

is a subset of the edges of a graph

such that no two edges in

has the largest size amongst all matchings in

a maximum matching. We call a vertex of

touches that vertex. Otherwise, the vertex is unmatched.

On the left below is an example of a matching in a bipartite graph (the red-colored edges represent a matching): 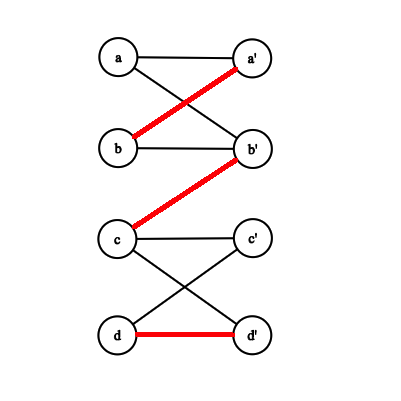 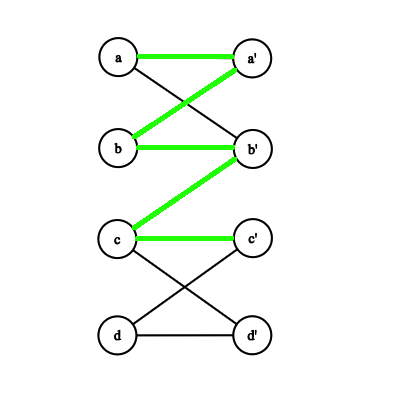 which starts at an unmatched vertex and then contains, alternately, edges from

, is an alternating path with respect to

. We call an alternating path that ends in an unmatched vertex an augmenting path.

For the matching above, the path

is an example of both an alternating path and an augmenting path. This path is highlighted in green on the right.

2.2. How Are Augmenting Paths Used for Finding Maximum Matchings?

We can use an augmenting path

to turn a matching

into a larger matching by taking the symmetric difference of

with the edges of

. In other words, we remove edges from

which are in both

. We add/keep all other edges. We can best illustrate this by an example: 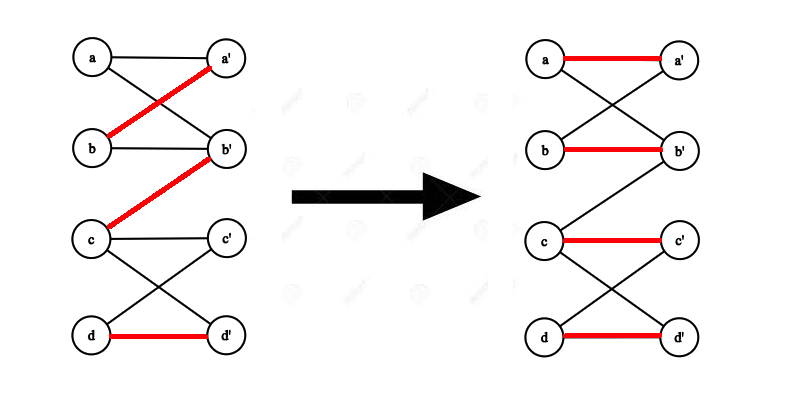 The augmenting path we used is shown below:

Here we used the augmenting path

(shown in green) to augment the initial matching

to obtain a bigger matching

. We also kept the edge

We can prove that if we start with any matching and repeatedly augment it by augmenting paths, we’ll always eventually obtain matching of optimal size, i.e., a maximum matching.

This is the key intuition behind any algorithm for finding maximum matchings.

2.3. Algorithms That Use Augmenting Paths to Find Maximum Matchings

Two examples of famous algorithms that use augmenting paths are the Hungarian Algorithm and the Blossom Algorithm. We can use the former to find maximum matchings in a bipartite graph and the latter to find maximum matchings in a general graph. To find an augmenting path, algorithms will typically use a tree search such as depth-first search or breadth-first search, with some minor modifications/additions.

Let’s look at a few key definitions first. Then we’ll see what an augmenting path is in the maximum flow problem.

is a directed graph in which each edge

has a nonnegative capacity

. We don’t allow self-loops and

doesn’t exist. Finally, if there exists an edge

in the network then the reverse edge

Here is an example of a flow network which contains a flow with a total value of 19: 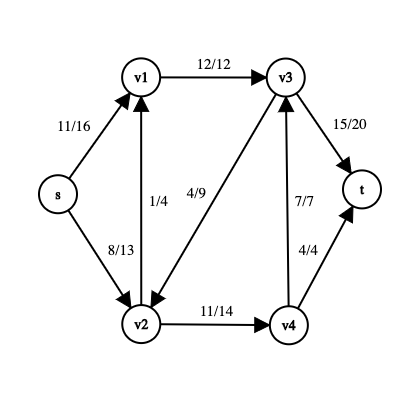 The edge labels take the form

to communicate the fact that an edge has a capacity of

and a flow of

There are two special vertices in a flow network; the source

We define a flow in a flow network as an assignment of nonnegative real-numbers to the edges of the network such that the values do not exceed the capacity constraints and the principle of flow conservation holds. Flow conservation says that at every node except the source and the sink, the total incoming flow must equal the total outgoing flow.

The total value of a flow

, and we want to find a flow of maximum value.

Given a flow network

represents how we can change the flow on different edges of

with flow less than that edge’s capacity, there will be a corresponding edge in

that has a residual capacity of the original edge’s capacity minus the flow on that edge.

If an edge in the original graph is saturated (its flow equals its capacity), then the corresponding edge is omitted from the residual graph as it cannot admit anymore flow.

We can also have edges in the residual graph that are not in the original graph. These are edges that allow an algorithm to send flow back on an edge, thereby reducing the original flow on that edge. If we have an edge

with a certain amount of flow on it, then we’ll have an opposite edge

in the residual graph with a capacity equal to that flow.

Below is an example of the residual graph

for the flow network 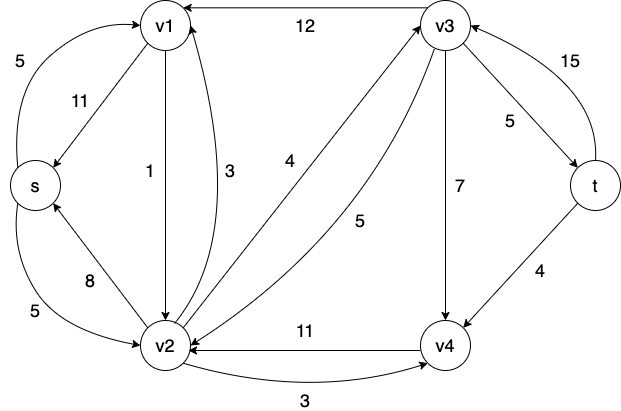 If we look at this residual network, we can see the above concepts in action.

For example, we can see that there is an edge in

with a capacity 16 from

with a flow amount of 11 units. Therefore, we have two corresponding edges in

. One edge is a forward edge from

with a residual capacity of 5. The other is a back edge from

with a residual capacity 11.

. The back edge communicates that we can send 11 units of flow back from

(which is the same as reducing the flow going from

Now that we have defined what a residual network is, we can talk about augmenting paths. Given a flow network

, an augmenting path is a simple path from the source to the sink in the corresponding residual network

. Intuitively, an augmenting path tells us how we can change the flow on certain edges in

so that we increase the overall flow from the source to the sink.

For example, here is an augmenting path (shaded in red) in the previous residual graph: 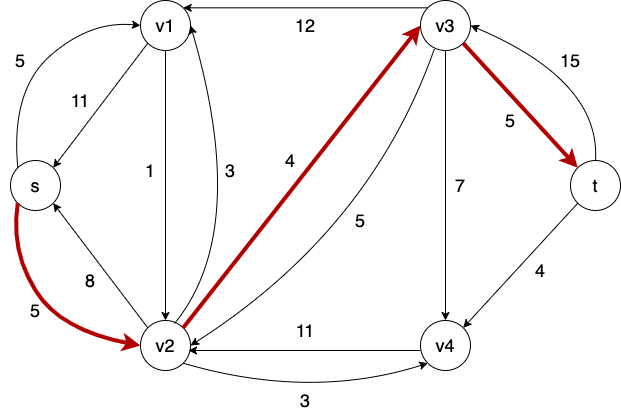 If we treat this network as a flow network, we can think of sending 4 units of flow along this path from

. Sending flow along this path in

corresponds to increasing and decreasing the flow on particular edges in

. In this case, we can send at most 4 units of flow along the augmenting path in

, we increase the flow by 4 units on edges

, and decrease the flow by 4 units on the edge

We can prove that given any flow

in a flow network

and an augmenting path in

with this path will give us a new flow in

with a higher value.

3.4. Algorithms That Use Augmenting Paths to Find the Maximum Flow

Based on how we find augmenting paths in the Ford-Fulkerson method, we can obtain better running times. For example, we can choose the shortest path with available capacity as our augmenting path in each iteration. Then we’ll get a faster implementation of Ford-Fulkerson. This is called the Edmonds-Karp Algorithm.

Another algorithm for computing maximum flows is called Dinic’s Algorithm. Instead of simply finding one augmenting path in each iteration, it makes use of two important ideas: the level graph and the blocking flow. By finding a blocking flow, Dinic’s algorithm computes all augmenting paths of a particular length. Then it uses this blocking flow to augment the flow.

In this article, we have studied what augmenting paths are in the contexts of maximum matchings and maximum flows. We have also briefly discussed some algorithms which make use of augmenting paths.