In this article, we'll learn about how Apache Cassandra partitions and distributes the data among nodes in a cluster. Additionally, we'll see how Cassandra stores the replicated data in multiple nodes to achieve high availability.

In Cassandra, a single node runs on a server or virtual machine (VM). Cassandra is written in the Java language, which means a running instance of Cassandra is a Java Virtual Machine (JVM) process. A Cassandra node can live in the cloud or in an on-premise data center or in any disk. For data storage, per recommendation, we should use local storage or direct-attached storage but not SAN.

A Cassandra node is responsible for all the data it stores in the form of a distributed hashtable. Cassandra provides a tool called nodetool to manage and check the status of a node or a cluster.

On the data write, Cassandra uses a hash function to calculate the token value from the partition key. This token value is compared with the token range for each node to identify the node the data belongs to.

Let's look at an example. The following diagram shows an eight-node cluster with a replication factor (RF) of 3 and a single token assigned to each node: 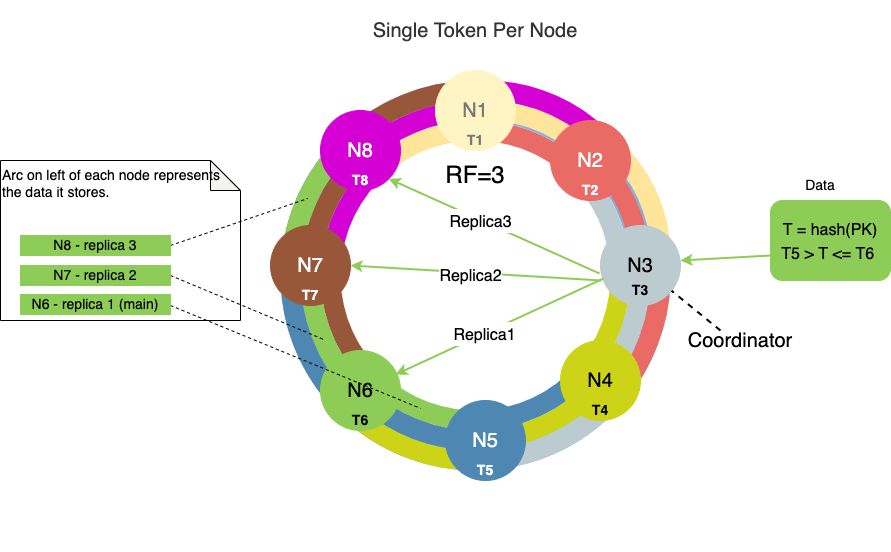 A cluster with RF=3 means each node has three replicas.

The innermost ring in the above diagram represents the main data token range.

The drawback with a single token per node is the imbalance of tokens created when nodes are either added to or removed from the cluster.

Assume that, in a hash ring of N nodes, each node owns an equal number of tokens, say 100. Further, assume there's an existing node X that owns token ranges 100 to 200. Now, if we add a new node Y to the left of node X, then this new node Y now owns half of the tokens from node X.

Since Cassandra 2.0, virtual nodes (vnodes) have been enabled by default. In this case, Cassandra breaks up the token range into smaller ranges and assigns multiple of those smaller ranges to each node in the cluster. By default, the number of tokens for a node is 256 – this is set in the num_tokens property in the cassandra.yaml file – which means that there are 256 vnodes within a node.

Below is a diagram showing a four-node cluster with two tokens assigned to each node: 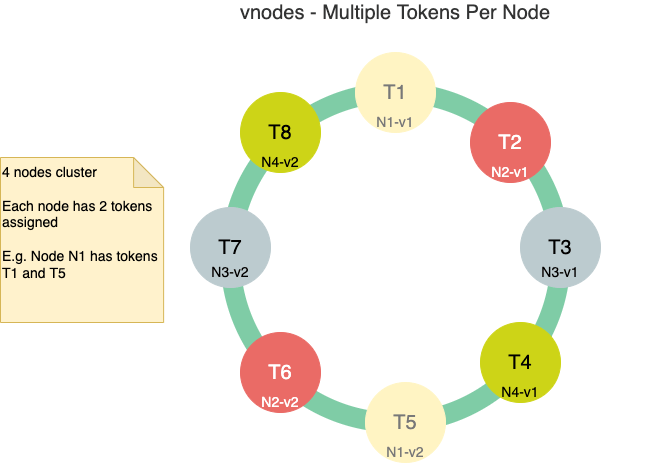 The advantage of this setup is that when a new node is added or an existing node is removed, then the redistribution of the data happens to/from multiple nodes.

When we add a new node in the hash ring, that node will now own multiple tokens. These token ranges were previously owned by multiple nodes, so that data movement post-addition is from multiple nodes.

Cassandra provides different partitioners that use different algorithms to calculate the hash value of the partition key. We can provide and configure our own partitioner by implementing the IPartitioner interface.

The Murmur3Partitioner is the default partitioner since Cassandra version 1.2. It uses the MurmurHash function that creates a 64-bit hash of the partition key.

Prior to Murmur3Partitioner, Cassandra had RandomPartitioner as default. It uses the MD5 algorithm to hash partition keys.

Cassandra achieves high availability and fault tolerance by replication of the data across nodes in a cluster. The replication strategy determines where replicas are stored in the cluster.

Each node in the cluster owns not only the data within an assigned token range but also the replica for a different range of data. If the main node goes down, then this replica node can respond to the queries for that range of data.

Cassandra asynchronously replicates data in the background. And the replication factor (RF) is the number that determines how many nodes get the copy of the same data in the cluster. For example, three nodes in the ring will have copies of the same data with RF=3. We have already seen the data replication shown in the diagram in the Token Ring section.

Once the partitioner calculates the token and places the data in the main node, the SimpleStrategy places the replicas in the consecutive nodes around the ring.

On the other hand, the NetworkTopologyStrategy allows us to specify a different replication factor for each data center. Within a data center, it allocates replicas to nodes in different racks in order to maximize availability.

The NetworkTopologyStrategy is the recommended strategy for keyspaces in production deployments, regardless of whether it's a single data center or multiple data center deployment.

The replication strategy is defined independently for each keyspace and is a required option when creating a keyspace.

Consistency means we're reading the same data that we just wrote in a distributed system. Cassandra provides tuneable consistency levels on both read and write queries. In other words, it gives us a fine-grained trade-off between availability and consistency.

A higher level of consistency means more nodes need to respond to read or write queries. This way, more often than not, Cassandra reads the same data that was written a moment ago.

Since Cassandra is an eventually consistent system, the RF makes sure that the write operation happens to the remaining nodes asynchronously in the background.

The snitch provides information about the network topology so that Cassandra can route the read/write request efficiently. The snitch determines which node belongs to which data center and rack. It also determines the relative host proximity of the nodes in a cluster.

The replication strategies use this information to place the replicas into appropriate nodes in clusters within a single data center or multiple data centers.

In this article, we learned about general concepts like nodes, rings, and tokens in Cassandra. On top of these, we learned how Cassandra partitions and replicates the data among the nodes in a cluster. These concepts describe how Cassandra uses different strategies for efficient writing and reading of the data.

These are a few architecture components that make Cassandra highly scalable, available, durable, and manageable.

An intro SPRING data, JPA
and Transaction Semantics Details with JPA
Get Persistence right with Spring
Download the E-book
Comments are closed on this article!
Persistence sidebar banner

Learn how to do Persistence with Spring!
Download the E-book